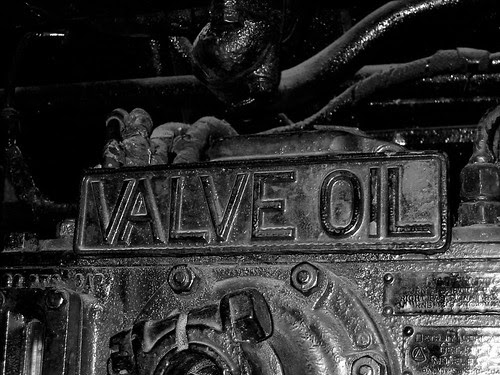 Side of an Engine

Roberto Bolaño’s The Savage Detetives is structured around a series of absences, MacGuffin-style, MacGuffins with MacGuffins within. The bulk of the novel is in the voices of various persons who’d encounter’d Arturo Belano (and sidekick, Ulises Lima), “visceral realist” poets in Mexico City in the ’seventies. Documentary, oral biography. Belano and Lima prove mysterious enough, too—constantly disappearing in search of traces of the legendary woman poet Casárea Tinajero, editor of the nigh-unknown 1920s magazine Caborca. Hands down the finest writing about the hoopla of youth writing (“No one paid attention to them and they opted for indiscriminate assault.”) ever. Here’s one “full report,” by the poet Rafael Barrios:

Our visceral realist activities after Ulises Lima and Arturo Belano left: automatic writing, exquisite corpses, solo performances with no spectators, contraintes two-handed writing, three-handed writing, masturbatory writing (we wrote with the right hand and masturbated with the left, or vice versa if we were left-handed), madrigals, poem-novels, sonnets always ending with the same word, three-word messages written on walls (“This is it,” “Laura, my love,” etc.) outrageous diaries, mail-poetry, projective verse, conversational poetry, anti-poetry, Brazilian concrete poetry (written in Portuguese cribbed from the dictionary), poems in hard-boiled prose (detective stories told with great economy, the last verse revealing the solution or not), parables, fables, theater of the absurd, pop art, haikus, epigrams (actually imitations of or variations on Catullus, almost all by Moctezuma Rodríguez,), desperado poetry (Western ballads), Georgian poetry, poetry of experience, beat poetry, apocryphal poems by bpNichol, John Giorno, John Cage (A Year from Monday), Ted Berrigan, Brother Antoninus, Armand Schwerner (The Tablets), lettrist poetry, calligrams, electric poetry (Bulteau, Messagier), bloody poetry (three deaths at least), pornographic poetry (heterosexual, homosexual, or bisexual with no relation to the poet’s personal preference), apocryphal poems by the Colombian Nadaístas, Peruvian Horazerianos, Uruguayan Cataleptics, Ecuadorian Tzantzicos, Brazilian cannibals, Nô theater of the proletariats . . . We even put out a magazine . . . We kept moving . . . We kept moving . . . We did what we could . . . But nothing turned out right.

A magazine with the unbelievably apt (uncompromising, black humor’d, assaulting) title (for the “era”) of Lee Harvey Oswald.

One character, the diary keeper whose words we read for the first movement of the novel—name of Juan García Madero, a kind of kid brother to the (slightly older) visceral realists—one morning makes the rounds of Mexico City bookshops looking for Ulises Lima and Arturo Belano and stealing books. (Shades of Ted Berrigan again! Ah, the ’seventies, who was it again, who got nabbed with a copy of Beckett’s How It Is stuff’d down the pants? Had to “confer” with one “Detective Fish”?) In three stops García Madero lifts nine books, amongst which—Desnos’s Corps et biens, Borges’s Dr. Brodie’s Report, Vladimir Holan’s A Night with Hamlet and Other Poems, a Max Jacob anthology, a Gunnar Ekelöf anthology, “Stendhal’s The Red and the Black . . . and Lichtenberg’s Aphorisms, translated by Alfonso Reyes.” That afternoon García Madero’s got a lovely little piece of brooding

. . . as I arranged my books in the room, I thought about Reyes. Reyes could be my little refuge. A person could be immensely happy reading only him or the writers he loved.

Only to dismiss the Reyes countenance about to flood’s whole being: “But that would be too easy.” I love: the variety, the list. The notion of toeing somebody else’s line—think of Ralph Maud’s book about Charles Olson’s reading, or, Olson tracking down Melville’s library, think of reading “only” what Guy Davenport read—something heartbreakingly wondrous about sleuthing along that way. And next I think: who the heck is Alfonso Reyes? Gringo limits, I keep bumping my nose against a whole continent of writers—no wonder the ferocity of Bolaño’s anger and scorn against the one’s—fine-fettled and groom’d, Paz and Neruda and the el boomistas who made it out and under the norteamericano skin.

How accurate the tumult and accident, how literary “movements” get born, most plausibly put, more in the nature of a stump’d toe, a goof somebody decides to “go with,” in spite of ratiocinated (gussy’d up) later foolproof accounts (here’s where the Grand Pianists meet the “visceral realists”)—Laura Jáuregui’s report:

. . . strange things started to happen to Arturo. That was when visceral realism was born. At first we all thought it was a joke, but then we realized it wasn’t. And when we realized it wasn’t a joke, some of us went along with him and became visceral realists, out of inertia, I think, or because it was so crazy that it seemed plausible, or for the sake of friendship, so as not to lose a whole circle of friends, but deep down no one took it seriously. Not deep down.

And later, in Laura Jáuregui’s retrospect, how it’s love, stupid love, that fires the blank and torrid letters of the literary world, more ’n anybody’ll admit. She (recipient of Arturo Belano’s enormously stupid love), off “to study biology,” meeting others, a different life, &c.:

Still, I always . . . kept track of what Arturo was doing, and I thought: of all the stupid things to come up with, how can he believe this junk, and suddenly . . . it occurred to me that it was all a message for me. It was a way of saying don’t leave me, see what I’m capable of, stay with me. And then I realized that deep down the guy was a creep. Because it’s one thing to fool yourself and another thing entirely to fool everybody else. The whole visceral realism thing was a love letter, the demented strutting of a dumb bird in the moonlight, something essentially cheap and meaningless.

But that wasn’t what I meant to say.

Which is how nobody ever intends to say the truth. Bolaño: “Literature isn’t innocent. I’ve known that since I was fifteen.” Not for “stridentists,” not for the faux-rapturists of the almighty hinterlands waiting for a grander insobriety to come down and sop them up, not for hooplaists manufacturing excitement out of commonplace regrets, not for Cageans ringing furtive little immeasurable nothings (“Measurements . . . measure measuring means”), not for new amplifiers rigging feedback into every word, not for dime-a-dozen keyboardists with spongiform dicks rigged to “control-C / control V” bounce patterns, making big jujube out of computerese. Not the “Indiscriminatists.” Unh-unh.

Noted with a gulp: a list somewhere of Michael Ondaatje’s prefer’d novelists, or novels—so struck I was I didn’t finick out the particulars—wherein he puts up the ground rule that he’s not including Faulkner, García Marguez, or Willa Cather—as they’d “go without saying.” Looks like I’d better hie off to Red Cloud and see’s if I find a copy of O Pioneers! or My Ántonia. (Recalling now how, during a stint of employ in the Cornell University Press warehouse, a sun-clobber’d Quonset hut up off Dryden Road, the pig farmers I work’d with—one telling me how he’d had to put a whole arm up a sow, “help the little piglets out”—call’d her Willa Catheter: “We need a copy of that Willa Catheter book.”) Ondaatje, whose earlier novels—In the Skin of the Lion, particularly, not even counting in the novel “pile” the Buddy Bolden-derived Coming Through Slaughter or the terrific memoir, Running in the Family—I find outdo the later, ’s got a new one coming down the pike.