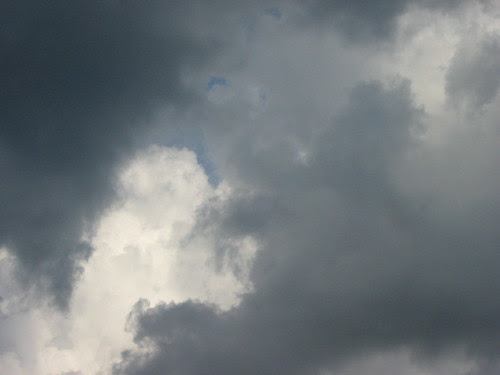 Drenching rain, and I fuddle with photographs—my propensity for the miniature, the close-up, an exclusionary tactic. And noting how I rid the photographs of green. (Landscapes invariably turn’d into black and whites.) I used to quarrel with a painter I know: how impossibly difficult green is! How wrong it is when daub’d up, mere paint! Green stays in greenery, period! How there is no painting that’d not be “better off” without green!

I go off looking for Gerard Manley Hopkins riff about varieties of green—Hopkins’s notebooks all about the slenderest differences, in colors, in shapes. A fearsome intensity of looking in the man: “. . . such clouds anvil-shaped pink ones and up-blown fleece-of-wool flat-topped dangerous-looking pieces.” Elsewhere he writes of a “shires-long of pearled cloud under cloud, with a grey stroke underneath marking each row.” Which I always think is source and kin to Ashbery’s “sky full of clouds, clouds upon clouds” in “Poem in Three Parts” (Self-Portrait in a Convex Mirror). And Hopkins’s “during dinner I talked too freely and unkindly and had to do penance going home” in that entry—23 July 1874—kin, too, to Ashbery’s “‘Once I let a guy blow me. / I kind of backed away from the experience’” in the clouds piece. (Or possibly not. “It’d be pretty to think so.”)

I go off to find the Ashbery. “Poem in Three Parts” is nothing like I recall. (Frankly, I recall’d it titled “Two Poems”—one cloudy outburst, one wry sex report: “‘Probably if the circumstances were right / It could happen again, but I don’t know, / I just have other things to think about, / More important things.’” Which is what I do so like about memory: how wrong it is! How it rearranges its scraps—it’s allow’d so little!—in ways unfathomable and proper to itself!) Then (same poem):

Nameless shrubs running across a field
That didn’t drain last year and
Isn’t draining this year to fall short
Like waves at the end of a lake,
Each with a little sigh,
Are you sure this is what the pure day
With its standing light intends:
There are so many different job:
It’s sufficient to choose one, or a fraction of one.

Though of course it never is. Which is why one bounces so, like light, off clouds. “To fall short / Like waves at the end of a lake”: I intend to keep that particular awkwardness with me for many years to come.

I find great caginess when I am canvassing. If I ask outright I get nowhere. People will tell you what they wish you to know about themselves but it is usually something different to what you want to know about them. They are strict about this and cannot be persuaded to add any fact which they think better withheld.

Two sixteenth-century cottages made of wattle and daub. The wattles were the hazel-branch infilling between the oak posts. One of these cottages is the only thatched dwelling left in the village.

I think that living in the country, for all their sentimental denials, is something which is held in contempt by most people today. They believe that one has opted out of a concern for all kinds of problems. The country is where one doesn’t get on. But if I was interested in getting on, as it is called, I wouldn’t be a poet.

And, later: “City life fragments a man. He is not complete when the reminders of the great natural complex of which he is a part are absent. The business of poetry is to mend the fragmentation which occurs when men forget their place in the natural creation.” Of the poetry of “city poets,” Blythe writes: “I sometimes think that it is informed by an improper, a Satanic fury. And with clever words disguising the lack of wonder.” Probably quaint, all that—quaint as the word quaint is, that is, in ordinary use meaning, quite robustly “skilled, ingenious, clever, &c.” up to the seventeenth century, and now rather limitedly meaning “rare, rusticatedly pretty, disdained, &c.” I doubt it’s possible to any splendid degree to avoid the fragmenting caused by “city life,” the way it permeates us now—the electronickal heft and miniature of it zinging us in its constant antic round.

Ah, spring, how it greens up my inherent hermitry, how, in cloud-cache’d sun I’d set forth, though not with such a troupeau ’s the Canterbury gang, not with a single soul at all:

Yes, that’s exactly what I am “thinking lately—”