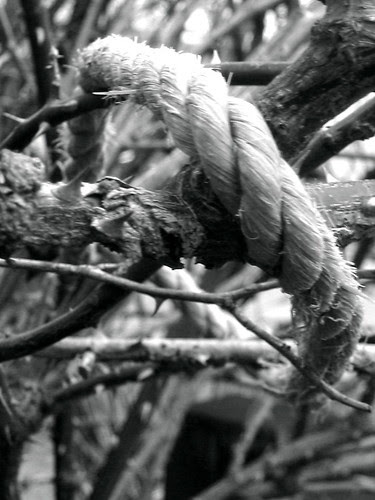 Rope in the Roses

Finish’d the new Jonathan Lethem novel, You Don’t Love Me Yet, with something akin to indifference, duty. Thinking, is it a “throwaway”—something writ to shrug off a contractual obligation? (No evidence for that.) Is it a “nosethumb”? A growl’d toss-off against the purse-strings of recognition, a way of re-keying one’s hipster “cred”? (No evidence beyond the clumsy book itself.) I did (rather momentarily) think to compare Lethem’s writing about performing musicians to Nathaniel Mackey’s. And maybe there’re the merest whiffs of Mackey there. Lethem’s band’s: “. . . got something, and some of the something they’ve got is the allure of an enclave at odds within itself and yet impenetrable to others, its members exchanging small gestures of disaffection within their troupe that makes others crave to be included in the fond dissension.” Which is in the social realm, which is where Lethem’s star burns brightest. Something like Mackey’s (out of Atet, A.D. (2001), the third volume of ’s brilliant epistolary novel—work I’d put up “higher” than Mackey’s poetry—bigger, somehow, in investigating ideas—From a Broken Bottle Traces of Perfume Still Emanate):

We stood on lost, oddly elevated ground, elegiac ledge. This was no mere materialization of loss even so, no glib legitimation of lack, elegy (lapsed eligibility) notwithstanding, We stood upon or perhaps had already stepped across an eccentric threshold, thrust, or so it seemed, into a post-expectant future, the anti-expectant gist of which warned us that “post” might well turn out to’ve been premature. What expectant baggage did we weigh ourselves down with even now?

Or, a couple paragraphs later, band still playing (which is what is “going on” above):

We were several bars into our opening number before fishbone urgency let go of our throats. The ripped, exspectorant permission it apprised us of abruptly left us on our own, ushered albeit we were that much father along the pointillist plank on which we walked. Djamilaa, Penguin, Aunt Nancy, Lambert and I stood in staggered array, stumbling in place while Drennette sat a though caught in a suspended spill. She looked as if she’d fallen backwards, as if her fall had been broken by the stool on which she sat. She too, it appeared, stumbled in place.

(And how is it that I see Benjamin / Klee’s “Angel of History” in Drennette’s caught stance? Music the rubbish at one’s feet that allows one to stand “above” the quotidian. Which is one way to plunge into the “present.”)

In the post-novel diaspora of energy, I turn’d to Gerald L. Bruns’s latest, On the Anarchy of Poetry and Philosophy: A Guide for the Unruly (Fordham University Press, 2006). And lit rather immediately on a description (owed, apparently, to “social theorist Zygmunt Bauman”) of complex systems. Bruns:

A complex system, unlike logical, mechanical, or cybernetic systems, is temporal, not so much in time as made of it. This means that it is turbulent and unpredictable in its workings and effects (structured . . . like the weather). A complex system is not governed by factors of any statistical significance, which is why a single imperceptible event can produce massive changes in the system. It follows that a complex system cannot be described by laws, rules, paradigms, causal chains, deep structures . . . It forces us to apply . . . the principle of insufficient reason—which is, however, not the absence of reason but . . . a reliance on practical experience, discussion, improvisation, and the capacity for midstream corrections. In certain philosophical circles this is called “pragmatism”; in others, “anarchism” (meaning . . . a search for alternatives to principles and rules [an-archē], on the belief that what matters is absolutely singular and irreducible to concepts, categories, and assigned models of behavior.) Meanwhile, what anthropologists call “thick” descriptions are needed to make sense of complexity, because such a system can only be comprehended piecemeal, detail by detail, the way mathematicians plot the coastline of California.

Which is exactly what Blogland ought—that’s my prescriptive “ought”—be doing. Piecemeal registries of the available works. Indicating only tentative pianissimo connections, thrusts, assemblages. No “schools” allowed. No generalissimo-style generalities. We used—summer camp—to send youngsters off on errands to fetch back a “thirty foot length of shoreline—‘Go ask the waterfront staff’”: that’s it. Review the imaginary chapbook. Poke into the unimaginable detritus that lies just behind the shelf where your experience of the world’s bland piety ends. (Rather ’n go all Sly Stone in resounding exuberance and imprecation—“I want to take you . . .”—I’ll end with a cautionary note: Please do not inflate up for us another grand puffy structure of assignments in order to reduce a bounteous mess to a controllable zilch. “You knew I’d say that.”)