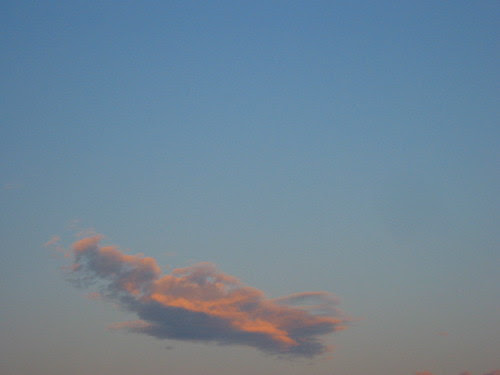 The way the interrupts. (A Clark Coolidge sentence.) The way the interrupts (avoiding the Latinate “shun,” the way it co-opts the abrupt rapture of interrupts’s “push,” all meaning being sound’s crave, what replaces the vacuum left by sound’s expulse—just to put it as dauntingly as possible) of a long weekend—the “other chores”—bedraggle one, make a late Sunday awry with unfinished incohesives, and cold with a skiff of granular snow.

What’d I do? Putter’d through some busywork. Try’d, edging into the kingdom of sleep, to conclude the life of Larkin, and failed. (Increasingly struck by the paucity of the finish’d works, the paltry number—like Elizabeth Bishop’s—how it adds up to an out-sized repute. The limited palette, the restraint, and the failure, seemingly, to consider “form” anything beyond a hand-me-down thing, a unquery’d way—is it my American jive-ass big destiny talking

(or is that American big-ass jive destiny? I know some of those, too) that faults one for a small job done decently? (Larkin warn’d against that thing precisely, worrying how one may “insensibly come to embrace what I think of as the American, or Ford-car, view of literature, which holds that every new poem somehow incorporates all poems that have gone before it and takes them a step further.” Obviously never, that Larkin, reading the Robert

and household appliances—one hundred upright vacuums!—arranged in bag-empty squads across the floor. Unprepared to find the only remaining Dymaxion house assembled there today—R. Buckminster Fuller’s circular aluminum-alloy house hanging off a central pole, with moveable (non-load-bearing) interior walls. Invented in 1929. Fuller’s attempt, post-WWII, to arrange for financing for the Beech Aircraft Co. in Wichita to convert 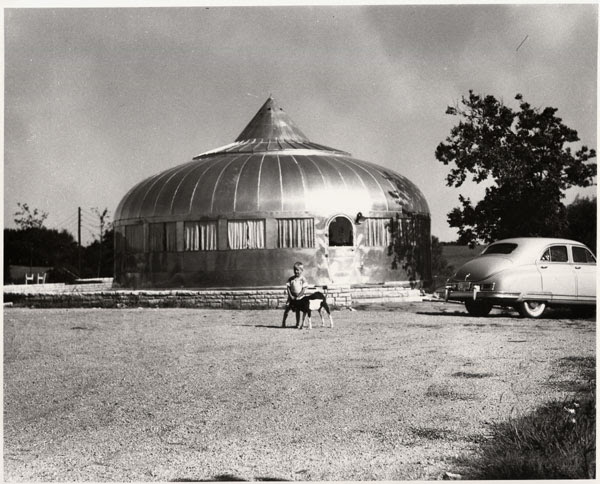 to making Dymaxion houses failed. Costing $6,500, unpack’d and assembled by ten men in two days. Removable, transportable, environmentally efficient. Ford’s museum is full, naturally, of cars (though no Dymaxion car (1933), Fuller’s three-wheeled “Omni-Medium Transport,” intend’d to carry ten passengers, and, eventually, go on land and water, and in the air.) Odd to descend a ramp painted to resemble a two-lane American highway,

advancing “through” history and notice, first, a gigantic list of automobile manufacturers, probably six or seven hundred, active in the early part of the twentieth century, all, or nearly all, neatly crossed off with red ink: representing the fail’d companies. Odd to note how many were marked “electric” or “steam.” Odd to see a Doble steam car, apparently something of a technological success, with a note to the placard, indicating

something like “stock irregularities” caused the company’s collapse. Odd to find one small display of union newspapers—cheaply printed dullish rags—looking evanescent—about to fly into papery slivers—amidst all the buff’d up shine of glossy metal, and a copy of the famous photograph of Ford’s goons kicking and punching UAW organizer Richard Frankensteen (whom they disabled by pulling ’s coat over ’s head)

along with Walter Reuther and two others in the 1937 Battle of the Overpass, near the entrance to the River Rouge plant. Ford of the private police force. Later, my brother explain’d how he’d had the opportunity a few years back to visit a huge house east of Ann Arbor, towards Ypsilanti, up on a bluff overlooking the Huron. Years before, it’d belong’d to the chief of Ford’s thugs. My brother described how a long underground passageway

led down the hill and empty’d out near the river. Construct’d with irregular stair-steps—likely to cause a pursuer’s mis-step—and side rooms for ducking into. A place that’d hold terrible stories. And Larkin? The Ford-car view of poetry? I don’t know: I refuse both. If Larkin’s popularity (differing from ’s achievement) amounts to the countless knowing recitals of “They fuck you up, your mum and dad. / They may not mean to, but they do . . .”

(and so Larkin drolly admitted: “‘They fuck you up’ will clearly be my Lake Isle of Innisfree. I fully expect to hear it recited by a thousand Girl Guides before I die.”) along with the spectacle of the gloomy fish-faced myopic of Hull, then what? Is the choice between a public presence diminish’d to two lines and a Zukofsky-like heritage as “poet’s poet’s poet,” meaning zero? It’s not a choice anybody makes, frankly.

One manages whatever one can manage and nose-thumbs it all. Though one is allow’d to enter into the public space of one’s “era” and try to dissuade it off its most repellent idiocies. Or one is compell’d through moral prod and fervor—these bloom within and nowhere else. Larkin (to Barbara Pym): “the notion of expressing sentiments in short lines having similar sounds at their ends seems as remote as mangoes on the moon.”

Larkin’s humor (in a letter): “A nice-ish evening, have eaten all I want of a good macaroni cheese (not too thick, not too thin), read most of the second half of Laurels are Poison (I think the chapter entitled ‘Iddy Umpty Iddy Umpty Iddy’ the most remarkable, and in a way the most creepy, in modern detective fiction) and am now awaiting the broadcast of the flyweight championship of the world (9.15 p.m.). Wonder what Ted Hughes is doing?”

Recognizing, good-humor’dly, the holy foolishness of the paltry domestic routine, the puttering. Versus the heroic, the asinine heroic, all myth and history in a mere couplet? Larkin’s parody of Hughes: “The sky split apart in malice, / The stars rattled like pans on a shelf, / Crow shat on Buckingham Palace, / God pissed himself.” There is, finally, no proper “way”—this is about one’s “way” after all—one sods along in one’s own sod,

making whatsoever one is able, umpty, iddy, or umpty iddy. And the years scoot by with little yelps of meaning, and one gets down, or gets it down, or it gets one down. At least it’s soddish to think so. 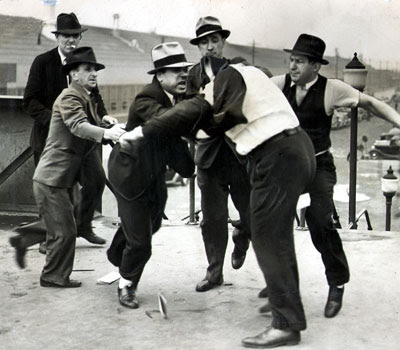 The Battle of the Overpass