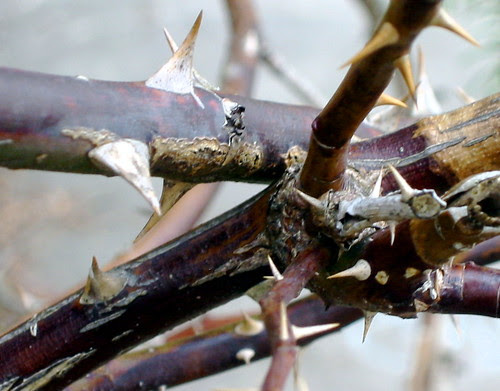 Or, one morning, one is diminished. Is it a welter of voices all clamoring up the decibels into a white noise, signal ratio down, or is it a paucity, the voices unrehearsed, pickled by fatuity, gone meek? Philip Larkin claim’d that retsina, the turpentiney Greek thing, “tastes of cricket bats.” (Evidence of Henry Miller’s ear: somewhere he’s got some galoots getting “stinko on retsina.”)

Ah, April, and the forsythia’s urine-rinse’s beginning to piss-burn the hedges! And a loud league of Sunday poets—a sort of Ladies Auxiliary—bands together to busy themselves writing “a poem a day”—oh, for a month of Sundays! National smirks. Putting additional smarm into the air. And every day another handful of soldiers “fall”—a way of saying that is a way of lying.

All of it is embedded into the daily routine, the scrubbed hands of the bicycle mechanic, the pulmonary hack of the Coca-Cola-wielding janitor, the way the African man punches a finger into every word he misreads. It’s what allows one to shift and adjust, making art out of life, or life out of art (Larkin again: “every time some black-jacketed young sod thunders past me on a ghastly 450 cc m’bike I mutter ‘Thom Gunn made you up, you sod, you noisy little bounder . . .’”)

Another way to keep oneself distract’d, without “falling” into terminal despond, the lethargy of the dying animal. What is the berserk routine of the daily other than a kind of “contentless form”? Signing a letter—“Love, R—”—nothing beyond a nod of acquiescence to a shot-up ideal, a murderous schematic, the kind of thing groupuscular allegiances get made of. (Gertrude Stein: “It can easily be remembered that a novel is everything.”)

What’s missing is any grit in the pulley, any challenge of a marring kind of slippage—that, say, one’d step off road to pee against a shack and be blown limbless. It’s the giddy pitch of the sporting “event,” the marathon, the negligible return, the excited forefronting, the “rules” and “constraints.” (“They shoot horses, don’t they?”)

And if anybody comes up tapping a shoulder and says “Explain all that,” that anybody is probably “invested with the history of the field”—and is arbitrarily seeking a way to manoeuvre a untrainable eye into a slotted verity. Bunk! Your immature churn-outs against the refinements refine a long-ago sated misery-index for the terminally distracted: go pick up that fallen man, and the legs!