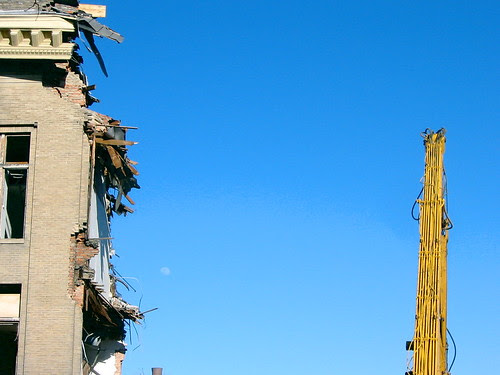 Sieve and winnow, that lovely Coleridgean phrase again. I re-tackle the second booklet of The Grand Piano, not that it’s a “chore,” just that I am in the Joyce-honor’d habit (Stephen Dedalus, vraiment, though I scunged if off Mark Scroggins) of reading “two pages apiece of seven books every night.” Enjoy’d Kit Robinson’s Joe Brainard-style pathos-snapshots. Odd to think of Rae Armantrout (Robinson seems to sketch women in terms of clothing—see Hejinian’s “short jacket with light brown suede panels”) in “one of those brightly colored silk bomber jackets from Korea with embroidery on the back, a tiger or dragon, representing a U.S. military unit.” (Or, odder, to see how Robinson ignores that jacket’s status as class marker. Is class—mostly elided in the U.S. public sphere—to be treat’d any differently by the Grand Pianists? Apparently not.) There’s no hint that Armantrout’s wearing the jacket ironically, nor any story of the jacket’s source. Thus, it becomes a detail no different than Hejinian’s outfit or “Ahni” (another woman)’s wearing of “a green silk Chinese jacket, a loose cotton skirt, and Birkenstocks” (another class marker, though rather less precise) whilst she moves out across the salt flats, “a bottle of beer in her hand.” (Television advertising colonized a whole generation’s consciousness.) Interestingly, Carolyn Forché—only person I think of—mentions just such a military bomber jacket in the poem about “Victoria,” Forché’s childhood friend who ’s “ashamed” of “the stupidity of the Michigan French,” who had photographs of servicemen tuck’d into the mirror-frame, and “jackets embroidered with dragons / from the Far East.” Forché’s poem is terribly maudlin, meaning, I suppose, that it wears its class markers on its sleeve “too proudly,” or with no irony whatsoever, rather like country music (thank-you, Jim Harrison, whose formula that is), which is the other way the benighted citizenry “admits” the existence of class differences, here in these States. It ends:

If you read this poem, write to me.
I have been to Paris since we parted.

That after picturing Victoria with “children, a trailer / in the snow.” (Who says, and in what book: “My only regret, that pouring a single glass, I’d finish the whole bottle”?)

Struck, in Tom Mandel’s latest entry, by how fully he enjoys writing autobiography. One determines by a certain fluidity, an effortlessness? Though I’d argue it’s marred here by a staged alternation with a less convincing “present”—Mandel is participating in a conference / “retreat” (“seventy-five people gathered to talk about the future of technology and of politics”) whilst keying in stories of moving to San Francisco (“Around the corner at the Hayes Valley Food Co-op, the Zodiac killer worked the till . . .”) in 1973 at the age of thirty-one. (Is one startled by the “turn” to autobiography in these later years by a number of Language writers? I see Mandel’s recent To the Cognoscenti (Atelos, 2007) (what kind of “class marker” is that title?) fully ensconces itself in the conventions of the genre:

I am working on my PhD. thesis
I’ve got a terrific idea for it

as a site for tragic art, Paris
our black classic, breaking up

Of course. Later, one reads of Mandel’s novel “about a pair of Siamese twins”—mention’d, too, in The Grand Piano and its “one really good chapter”: “I remember asking Saul to read it / which he did immediately, em sitting there / / peeing my pants . . .” Other “evidence” of autobiography: Silliman’s Under Albany, Armantrout’s True, some parts of Perelman’s Iflife . . .)

A parcel of digressions—all sieve and no winnow. What I’d intend’d to pursue here in Mandel’s (mostly) lively—I particularly like the notion of Mandel in New York, trying to get Macmillan to publish Harry Mathews’s early omnibus, The Sinking of the Odradek Station—section: just how pervasive is the idea on the part of the Pianists that, as Mandel writes: “Politics interrupts life, and political thought interrupts other thinking”? (Mandel goes on to ask if it—politics—holds us “in abeyance immobile”?) Which seems an odd dilemma for one whose aesthetic, if I comprehend it, makes of the art “object” that sublimely political thing, a “writerly” text. (We saw the same grudging animosity toward “the political” in Watten’s first entry—the sense of life interrupt’d by politics, the war in Vietnam.)

One other comment. A disjunct moment. Mandel points out (at the “retreat”) two opposing approaches to information-gathering, referring to “the eleventh edition of the Encyclopedia Brittanica and the Oxford English Dictionary”:

The former was engineered using the well-known command-and-control method, I note; its taxonomy is hierarchical, all-encompassing, an assertion of authority. The OED, on the other hand, incorporated an up-from-below process that engaged much of contemporary English society. Its taxonomy is simply and transparent.

And one thinks—Mandel in the next paragraph refers to “the social work of art”—naturally enough of the “experiment” of The Grand Piano one’s got in hand, though, again, wonders “why not put it up on the Web?”; “why the still rather exclusionary nature of the experiment?”; “where the dissenting voices?” And, bafflingly enough, a few pages later, we learn of Mandel’s book, EncY, whose “original” is “the preface to the edition of the Encyclopedia Brittanica mentioned.” Odd choice: though admittedly, Mandel says “the words seemed to come apart, to give me the leverage only a fragment can have over its original.” How we take things apart in order to comprehend. Winnow and sieve.