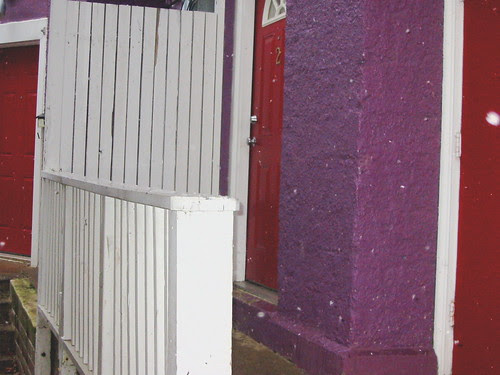 In a rather confused (and confusing) amalgam of community (Santa Barbara, of the 1969 Union Oil Platform A spill, and of the 1970 political torching of the Bank of America—something some Ithaca anti-war marchers attempt’d to re-enact in the spring of 1972, thrusting torches in through the bust’d out windows of the Collegetown branch of some bank, any bank—the draperies fail’d to catch, the cops start’d up with the lacrymogènes, and clubs) politics and “teenage girl” “youth zone” questions of libido, aggression, and petty criminality, Harrymen, oddly enough, focuses on “Boys. Men.” No female models appear’d available, or, if they were, were not consider’d. (One woman, visit’d in San Francisco, a boyfriend’s sister, and “member of the famous Cockettes,” is invisible—we see only the man “wearing translucent pink robes, glitter makeup” who answers the door, and naked toddlers “smeared with pastel ‘peace’ paints.”)

A narrative shift—presumably out of “youth zone”—begins: “I wonder at what moment I entered the art zone so fully that art, for some period of time, became a substitute for nature.” As “nature” ’s barely register’d as a concern (the “beach” is divided equally in Harryman’s world between place of “oil-stained birds,” place of “blond-assed surfer jocks,” and “I associate the beach with loving to fuck”), the remark seems abrupt, a mite dilettantish. What triggers the “art zone” is Frank Stella’s “series of red paintings with gray lines suggesting labyrinthine forms or mosque art motifs.” Harryman:

The gray lines and the red together offered a kind of architecture of thought in which one “could see the whole idea without any confusion.” [Here she footnotes Stella, “Tate Gallery, wall text.”] The painting’s nonlinguistic facticity struck a stunning blow to my busy mind, as I could not explain or even describe my fascination.

All that’s a jumble to me. Surely nigh-all painting exemplifies “nonlinguistic facticity”—it’s first “about” paint and line and color and proportion and reach. And the combo of the “labyrinthine” with the “whole idea without any confusion” suggests thinking probably most charitably term’d “busy.”

“Labyrinthine” recurs in Harryman’s comparing of Acker’s [Nymphomaniac] “text, a work whose narrative depletes itself through repetition until all that’s left is a labyrinthine surface of text” with Stella’s repeating lines series of paintings, abstractions which “might suggest to the poetic imagination content, or content, or cunt-tint that is undermined through the repetition of the pattern . . .” Which lingual play—a happy con job?—not only fails to suggest much of anything painterly, it refutes the argument of a “nonlinguistic” (pure) response.

At the end, in a bizarre representation that appears to measure Watten—whom Harryman’s rather recently met (she’s living with Steve Benson)—against a generic “blond-assed surfer jock” (or ’s board), Harryman conjures up “Barry standing as high as a large man’s surfboard next to the low table spread with books reading Jane Austen mockingly and me feeling pissed.” I’d argue that “mockingly” and that “pissed” probably ought to be, as they say, “unpack’d.”

Muddling about issues of the “abstract.” (To draw off, to draw away. Latin abstract-us drawn away, out of abs off, away + tractus, past participle of trahĕre to draw. I want to claim its root identical to that of trahison, traitorous, treasonous, though it does not seem so.) Is collage abstract? Is the effect of any collection of fragments necessarily to increase a “level” of the abstract? Doodling down some Frank Stella (out of Working Space, 1986). He claims that “abstraction faces no limit to expansion and extension, either in the direction of magnification or reduction. . . . It avoids . . . some of the obvious problems of realism, in which billboard technique often reduces representationalism to a form of abstraction by magnification. In practice, if not in theory, a face ceases to be much of a face if it gets big enough. With abstraction the problem is more one of sustaining pictorial energy than of keeping an image intact . . . Abstraction gains its freedom, its unfettered expandability, its own working space by eluding the spatial dictates of the real and the ideal image.”

The part I extract is: “With abstraction the problem is more one of sustaining pictorial energy than of keeping an image intact.” Which is akin to where “we” find the generic post-avant period-style today. Having ambuscade’d the “intact” image (and sent it off to Borneo, or traded it off “piecemeal” in exchange for felicity and speed and a “homologic realism”—that is, there is a “sameness of relation, a correspondence” between the structure of my mess, and the structure of the “mess out there,” (which is the world)), and / or having lanced the blister of representationalism with the piciform shard of the fragment, (and / or having launched the fragging grenade into the representationalist lieutenant’s tent), “we,” now, toss under a landscape of lost energy, reiterating nothing beyond ways to reiterate. How tired the bombast of the scattershot blasts of nil particulars that “represent the scattershot blasts of nil particulars that is “life” in the “age.” (Which “architecture of thought”—foregoing—is akin to an “architecture” of water, bearing no load beyond its own dissembling . . .) Huh?