Beckett at One Hundred (and One) 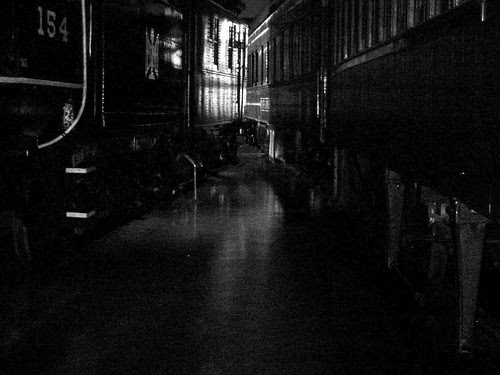 Samuel Beckett, pebble in cheek, hair like a tomahawk, got birth’d out into the foul mirey world one hundred years ago today.

The Samuel Beckett who famously wrote: “They give birth astride of a grave, the light gleams an instant, then it’s night once more.” In Waiting for Godot (1952).

Ask’d to say what the job of the artist is, Samuel Beckett answer’d: “To find a form that accommodates the mess.”

Edward Dahlberg, another of the snarling few, who rather inconceivably wrote of Oscar Wilde, “Too many things disgusted him,” once wrote a piece call’d “Samuel Beckett’s Wake” (1973). In it:

The crocuses are peeping up above the turf. It’s late afternoon, as if that mattered, and my stale uncle is Bible reading and hawking up saffron phlegm. Curse the old concupiscent devil, and his luskish uncle. And all of them pewing every Sunday. Damn the whole pewing lot. My mother’s mother, and her pewing gammer, and my father’s father’s excrement, and my priggish grand-aunt’s stinking shift, wormy, mind you, and her crafty lusts, and what of her halfpenny ancestors, and all my distant cousins which our mother earth has transubstantiated into maggots. Yes, they are snug and quiet many feet deep in the ground which is no better than a jakes.

Luskish: Slothful, lazy, sluggish. “When luskish seasons their retreat delay / And March enamour’d steals a kiss from May.” Pewing: The plaintive crying of a bird. “The birdes likewise with chirpes, and puing could / Cackling, and chattring, that of Ioue beseech.” Gammer: A rustic title for an old woman, corresponding to gaffer for a man. “My Gammer is so out of course, and frantyke all at ones.” Jakes: A privy. “The more unhealthful it may prove, by reason of Jaques, Dunghills and other excrementitious stagnations.”

Clark Coolidge, who insists that artists “start with matter, not with rules,” and, being train’d as a geologist, that “Stone has a certain cleavage,” quoted Samuel Beckett in a lecture at the Jack Kerouac School of Disembodied Poetics. Coolidge report’d that Samuel Beckett said:

It’s perhaps all a question of hitting on the right aggregate.

To what precisely the pronominal it refers there, Coolidge did not say. (Aggregate: Composed of distinct minerals, combined into one rock, as granite. “A compact aggregate substance, apparently compounded of quartz, ochraceous earth, chert, etc.”)

Birds with my piercing sight I have seen flying so high, so far, that they seemed at rest, then the next minute they were all about me, crows have done this. Ducks are perhaps the worst, to be suddenly stamping and stumbling in the midst of ducks, or hens, any class of poultry, few things are worse. Nor will I go out of my way to avoid such things, when avoidable, no, I simply will not go out of my way, though I have never in my life been on my way anywhere, but simply on my way.

Which is, certes, another way to “start with matter, not with rules.”

One biographer suggest’d that Samuel Beckett was “emotionally retarded.”

Of James Joyce’s Work in Progress (“surely the title of every work, surely the lovely, &c.”), Samuel Beckett wrote in Our Exagmination Round His Factification for Incamination of “Work in Progress” (1929):

Making one wonder who first formulated that somewhat useful, though increasingly tiresome argument, and when.

A pimp whose “wares” he’d cold-shoulder’d (legendary sexual nonchalance in those lacustrine green eyes) once stabbed Samuel Beckett, worrisomely near the heart.

Samuel Beckett related to Raymond Federman how he’d spent WWII “à Roussillon, dans le Vaucluse.” Which allow’d Federman to comprehend the reference to merdecluse in En attendant Godot: the terribly red earth. He writes: “I even mail’d off a postcard to Sam, postmark’d Roussillon, to tell him I was “dans le merdecluse.”

The thing I always think of about Samuel Beckett, the story about how, as a determined (or possibly besotted) young man, he wore the same size shoes as James Joyce—“to stand inside your shoes”—even though Joyce ’d tiny dancer’s feet, and Beckett the feet of a rangy fermier.

Samuel Beckett’s early exfoliating, running the gamut of possibles, bigger and bigger, one pebble in pocket, removed out of pocket, put in mouth, &c. Samuel Beckett’s late astonied (stupify’d?) diminishment, the texts (for nothing) trimmed down smaller and smaller. Where comes the pivot’s tipping point? One piece, “Lessness,” ends:

Always that tiniest sliver crack of light between darknesses. (Writing as “figment . . . dispeller of figments”?)

Samuel Beckett’s Fizzles, or Foirades. Fizzle: To break wind, or fart silently. See the “attributed to Swift” lines of “On Miss V———e’s F—t. In the Philippick Stile”:

. . .
Sweetest Warbler of the Tail,
Soft as Breeze of Southern Gale;
Or the fanning Zephyrs Blast,
Over Beds of Spices past;
Gentle Puff of fragrant Air,
Squeez’d from Breech of Virgin Fair;
’Tis by Thee the Fair discover,
Proof of Vigour in a Lover;
Silent Fizzle; or Speaking Fart,
Easily both Ease impart . . .