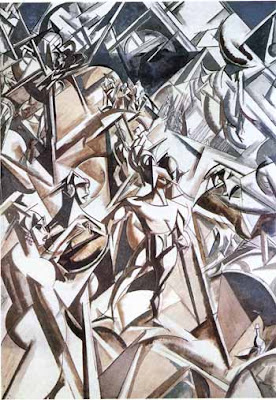 Wyndham Lewis, “Alcibiades” out of Timon of Athens, 1912

Everywhere in The Pound Era, Hugh Kenner makes distinct two forces: that of what’s done and stilled, replete with a kind of banal certainty against what seethes with unstoppable energy, restless for attending, unassuaged by it, and implacably uncomforting in its refusal of laxity or any final stasis. Putting forth Wyndham Lewis’s 1912 Vorticist “drawings for an edition, never produced,* of Shakespeare’s Timon of Athens”—in particular one called “Alcibiades” (“called [in William Cookson’s Agenda] ‘arguably the greatest single manifestation of artistic energy in the whole of English painting’”), he writes:

It is one of history’s great feats of attention, attention to an uncountable array of elements, all interacting. Being pure lines, the elements have no survival power of their own, save by virtue of the interaction that attention guarantees. In a canvas crowded with naturalistic figures, Frith’s Derby Day for instance, much anecdotal detail can be left for the all-too-human recognizing eye to find it and perk up, cheered. Not so here. The calmest things on which Lewis lets the eye rest are a bowl and a carafe, and these are enclosed in an equivocal semicircular space whose perspective snaps in and out at whim. They are cubist props, relegated to accessory status. The rest is lightning, clouds, spears, posturing figures, Renaissance helmets, a pneumatic woman, a screaming head, all fixed in a slow-motion explosion whose next centimeter’s expansion will occupy all eternity. A harsh light, falling from some source in the upper right, bathes their grimaces. They radiate downward and forward from a generating node at the upper left. The perspective seeks equilibrium between these points, where at upper center a quadrangular darkness, stood upon its corner, half-obscures a quasi-solar geometry.
Far in the foreground, vigorous glances meet across the center of the picture: a tension of human antagonism to which no drawn line corresponds. For much of the “Alcibiades”’ energy depends on the interaction of human figures, whose vectors of attraction and repulsion overlie and counter the thrust of all those hundreds of lines a hand has traced. Twenty-five years later Lewis was painting portraits of men aware that a painter is in the room.

Against that—“patterned energy” (“For the vortex is not the water but a patterned energy made visible by the water”)—Cubist forms seem idle, the playthings of a self-satisfied populace. Kenner:

For the cubist . . . a man is a still life.
Cubism, that great revolution of vision, had simplified its effort by banishing the human to that plane of sentiment where wine, violins, newspapers, tablecloths are cherished. Coy forms, in a cubist collage, invite relaxed recognition: beneath so much strangeness, the ikons of coziness dream.

According to Kenner, Wyndham Lewis’s energies, prior to 1912 (“annus mirabilis”) had “previously evaded design and yielded grotesques”: “A grotesque is an energy which aborts, as if to express its dissatisfaction with available boundaries, as a dwarf may be nature’s critique of the tailor’s dummy.” Evidence: Lewis’s 1911 “Smiling Woman Ascending a Stair.” Kenner labels it “the grotesque as a trammeling of energy.” (One notes a later form of grotesquerie à la Lewis: the portrait of Edith Sitwell without hands. One story is that Sitwell stopped sitting for the painting after Lewis’s unwelcome sexual overture.**) Lewis later wrote Sitwell into The Apes of God as Harriet Finnian Shaw, lesbian, with brothers Osmund and Phoebus. But “in the summer of 1912”—one hundred years back—Lewis (“about to turn 30”), found a way to accommodate energy in art:

That summer Art and Energy moved into sudden conjunction; forms filled his spaces, not forms arrested in grotesquerie but forms locked in passionate stases; oblique lines sprang from points of radiation to reverse the thrust of traditional perspective which tapers or dwindles toward a point of vanishing, but they bounded forms such as traditional perspective bounds, and so could capitalize on traditional principles of design. (Tradition is the artist’s stock of capital; it can tap impulses “older than the fish.”)

That final phrase out of Lewis’s 1919 essay “The Artist Older Than the Fish.” Begins: “The artist goes back to the fish. The few centuries that separate him from the savage are a mere flea-bite to the distance his memory must stretch if it is to strike the fundamental slime of creation.” And:

The creation of a work of art is an act of the same description as the evolution of wings on the side of a fish, the feathering of its fins; or the invention of a weapon within the body of the hymenopter to enable it to meet the terrible needs of its life. The ghostly and burning growths—the walking twigs and flying stones—the two anguished notes that are the voice of a being—the vapid twitter, the bellows of age-long insurrection and discontent—the complacent screech—all may be considered as types of art, all equally perfect, but not all equally desirable . . .

Lines that recall nothing so much as “posturing figures, Renaissance helmets, a pneumatic woman, a screaming head . . .” Patterned energies . . .

* See Kenner’s percipient damning of “the market” in determining “repute” (and apply it to the publicity machinations—and their lack—of current big-monied joints “and their representatives,” and wonder idly what’s now being “dropped out”):

The drawings have nearly all disappeared. We have them in reproductions made two years later by an ad hoc firm called The Cube Press, which disappeared likewise. The portfolio of prints is itself excessively scarce. Not being on the market where there is a vested interest in enhancing prices by talking up repute, the enterprise has dropped out of Art History, which in modern times has been written chiefly by dealers and clever collectors. (The Cubist enterprise in Paris had no such misfortune.) Lewis got beyond Cubism. The fact is virtually unknown . . .

** Lewis later wrote Sitwell into The Apes of God (1930) as Harriet Finnian Shaw, lesbian, with brothers Osmund and Phoebus. Sitwell next reviewed Lewis’s The Snooty Baronet (1932), with some pointed remarks concerning the Lewis-modeled protagonist Michael Kill-Imrie, calling him “bitter about the ladies, who are not attracted by him and, to revenge himself . . . he becomes a ‘gossip writer’ of the Novel.” And: “the fact that he has escaped being horse-whipped proves only, that he is too dirty to touch.” Of the sitting, one reads, in Sitwell’s autobiography Taken Care Of (1965):

Before the collar calamity [Lewis, visiting the Sitwells at Renishaw, had “mislaid his collar on the morning after his arrival, and could not come down to luncheon until he had found it.” The butler eventually “tracked it down, and it flapped back on to Lewis’s neck, much as a weary and rather dilapidated black-bird might return to its nest.” Note: “A grotesque is an energy which aborts.”] I sat for Lewis for the portrait of me that is in the Tate Gallery, and also for several drawings. But in the end, his manner became so threatening that I ceased to sit for him, and his portrait of me, consequently, has no hands.
His studio was situated in a piece of waste ground, off Kensington High Street, and haunted by pallid hens, squawking desolately and prophetically; and the appearance of Mr. Lewis’s hair aroused in some observers the conviction that the feathers of these had sought within its shades a refuge from the general confusion. Another school of thought, however, ascribed the alien substances by which it seemed to be bestrewn to a different cause, believing them to be a sprinkling of the snows of time. For the nature of his toilette, and his general appearance, undoubtedly aroused attention and gave rise to speculation. 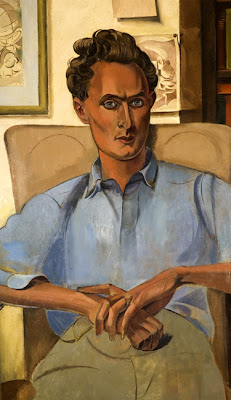 Wyndham Lewis, “Stephen Spender,” 1938
(“Twenty-five years later Lewis was painting portraits of men aware that a painter is in the room.”) 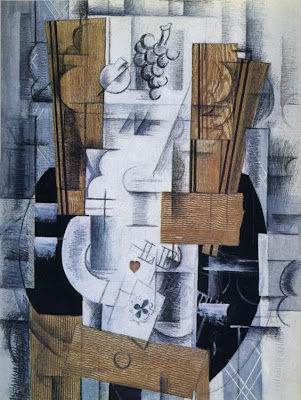 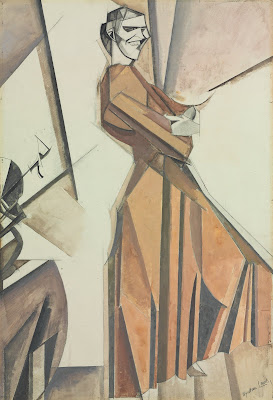 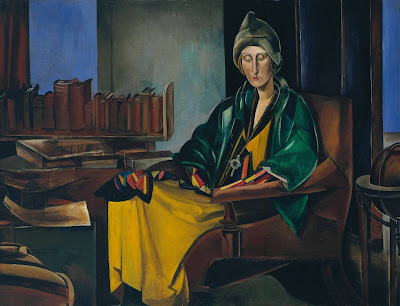