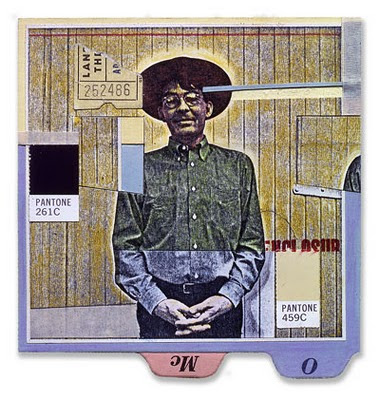 Fragments, when they are but notes (the unfinished works of a Spenser or a Michelangelo are a different matter), touch us as the baby glove of the pharaoh that moved William Carlos Williams to tears, or the lock of Lucrezia Borgia’s hair that drew Bryon back day after day to gaze (and to steal one strand for Landor); they “brave time” with a mite’s grip, missing by a rotten piece of linen or a grammarian’s inadvertent immortality the empty fame of the sirens’ song. To exist in fragments and in Greek is a doubly perilous claim on the attention of our time.

That writ to introduce the “Carmina Archolochi”—“the hundred and fifty-three fragments” rendered succinctly (“I have been as literal as an amateur’s Greek can manage”) by Davenport in an early number of Arion (II:2, 1963). Some fourteen of the bunch printed previously in that year in Henry Rago’s Poetry (CI:6, 1963). Some rewriting evident (Davenport, of the Archilochos: “much revised, more than anything I’ve ever done.** First it was simply Harvard homework: class in early Greek lyric with dear Cedric Whitman. . . . Then a version for [Poetry] . . . then another [Arion], and another [Carmina Archilochi, 1964]. When Hugh Kenner got California to bring it out [Archilochos Sappho Alkman, 1980], I then revised the whole damned thing again.”) A couple of versions. Out of Poetry:

Some Saian mountaineer
Struts today with my shield.
I threw it down by a bush and ran
When the fighting got hot.
Life seemed somehow more precious.
It was a beautiful shield.
I know where I can buy another
Exactly like it, just as round.

(Added in the rewrite: narrative clarity, a “moral” prop (“Life . . . precious”), vague regret. Lost: vernacular immediacy, the all-too-human taunt (“hill-billy”), the discontinuity of battle-tumult.) Here’s another couple. Out of Poetry:

When the fight’s with those hard Euboians,
No bow-strings’ whine or snap of bow-notch
Or whip of sling do you hear, but a delirium
Of Ares, sword work and spear sticking.
The tall Euboians famous for their knives.

(“Ares egging on” needed replacing: too much the gum-snapping teenage girl shouting out obvious advice. Lost: the sense of a seasoned fighter’s own talk (and shrug-off) of “a hell of a lot of sword work / and spear sticking”; the Arion version might be the work of journalist witnessing the combat.) And another. Out of Poetry:

I despise me a tall general
a swaggerer
a curly-haired, cheek-filled
whisker dandy

for me a proper officer’s
short and bow-legged,
both feet firmly planted
tough in the guts

I do despise a tall general,
One of those swaggerers,
A curly-haired, cheek-frilled
Whisker dandy.

For me a proper officer’s
Short and bow-legged,
Both feet planted well apart,
Tough in the guts.

I despise to see a tall,
Swaggering general
With a beard of curls.

Give me an officer
Who’s short and bow legged,
With his feet planted well apart.

Paring off the dandified swagger of “curly-haired, cheek-frilled,” &c. And the merely stance-reiterant “Tough in the guts.” Why “despise”? None of its forms seem right: “I despise me a tall general” too forcedly folksy; “I do despise a tall general” too languorous and precious; “I despise to see” merely awkward. (I am wont to go with “Nothing but contempt for . . .” or something—that welling up with Olson’s plaint “I am no Greek, hath not th’ advantage.”) Davenport, answering—for Arion (III:4, 1964)—a questionnaire regarding “The Classics and the Man of Letters”: “A good translation should take the captivated reader to the original. Should.” And, refuting any claim that the classics be “used up,” repeats a lovely story about the geologist Raphael Pumpelly (1837-1923):

Pumpelly, having lost his equipment, opened the Anacosta silver mines (or whatever mine)—well, I've just found the book (Pumpelly, Reminiscences, 1918, vol. I, page 198): “A thousand firebricks had, indeed, been sent by wagon from the East, but the Comanches in Texas had killed the driver, burned the wagon, and stolen the horses. In vain I studied carefully Kerl’s Metallurgie for methods used in out-of-way places.” He proceeded by methods he remembered from Agricola and Pliny. The mine was the Santa Rita, in Arizona. The dime in your pocket, minted with so many classical motifs, may contain some of its silver.

Forthright immediacy, apt, untrammeled as speech itself. One Archilochos fragment reads: “Yes, yes, / As sure as a poppy’s / Green.” Another is simply “Plums.”


* According to Davenport—out of 7 Greeks (1995)—Archilochos, “a professional soldier from the Aegean island of Paros,” is, after “the archpoet Homer,” “the second poet of the West.” Of Archilochos’s milieu (its daimon and its loss):

The clear minds of these archaic, island-dwelling Greeks survive in a few details only, fragment by fragment, a temple, a statue of Apollo with a poem engraved down the thighs, generous vases with designs abstract and geometric.
They decorated their houses and ships like Florentines and Japanese; they wrote poems like Englishmen of the court of Henry, Elizabeth and James. They dressed like Samurai; all was bronze, terra cotta, painted marble, dyed wool, and banquets. Of the Arcadian Greece of Winckelmann and Walter Pater they were as ignorant as we of the ebony cities of Yoruba and Benin. The scholar poets of the Renaissance, Ambrogio Poliziano and Christopher Marlowe, whose vision of antiquity we have inherited, would have rejected as indecorous this seventh-century world half oriental, half Viking. Archilochos was both poet and mercenary. As a poet he was both satirist and lyricist. Iambic verse is his invention. He wrote the first beast fable known to us. He wrote marching songs, love lyrics of frail tenderness, elegies. But most of all he was what Meleager calls him, “a thistle with graceful leaves.” There is a tradition that wasps hover around his grave . . . To the ancients, both Greek and Roman, he was The Satirist. [Here I add a sentence out of the 1980 Archilochos Sappho Alkman, removed for 7 Greeks: “And we have not a single whole poem of Archilochos.”]
We have what grammarians quote to illustrate a point of dialect or interesting use of the subjunctive; we have brief quotations by admiring critics; and we have papyrus fragments, scrap paper from the households of Alexandria, with which third-class mummies were wrapped and stuffed. All else is lost. Horace and Catullus, like all cultivated readers, had Archilochos complete in their libraries . . .

** Davenport’s hardly one to resort to self-puffery, I think. To put the Archilochos work in context, see the remark made to Joan Crane (c. 1987), regarding the composition of Flowers and Leaves: “If the poem is to judged ‘as poetry’, I’ll risk the two stanzas on Pierre Loti’s cat as the best I could do at the time (1951-1966, time of composition, through a good hundred revisions).” The stanzas hold up marvelously:

The cat of Pierre Loti. Hippolyte on l’appelle.
A sardine of paleological silver the great artist
Gave him when he sat for his portrait, aromatic
And with the soupçon of huile d’olive about it,
As was proper, whose family reached back
To Nilotic tax collectors in porcelain wigs,
To the bee gums of Beersheba, Akkadian hotels,
(A cousin removed was friend to Mr Smart the poet);
Leo Alektor kept the high gates at Mycenae.
Quite Hebraic the family tree, rich in detail.
But we are companion to Monsieur Loti.

The cat of Pierre Loti are we. We are civilization.
Our tribe has resided beyond the borders of France.
Mr Rousseau, master in the modern manner,
Has depicted us in forests of flowers, inquisitive
As catfish, intelligent as Miss Gertrude Stein.
Under starlight we have sniffed the desert arab;
Aztec vegetables and Perelandrian trees
Have been our precincts, and the gardens of Tchad.
But in footballeurs idiotic with motion
We take our delight, in Gruyère and sincerity,
Innocence, bicyclettes, Apollinaire, industry.

Restraint, poise, accuracy (that “paleological silver”—radiant bone-glare in dull sedimentary rock—is perfect; “idiotic with motion” wry and correct—somewhere Davenport makes “grace, the justice of motion”) Recall Fourier. (I see how Emerson, in a journal entry of 1850, remarked that “Fourier’s walking stick was marked off into feet & inches” and quoted the Fourierist adages Davenport loved to repeat:

And, in “Montaigne, or The Skeptic,” Emerson writes:

Charles Fourier announced that “the attractions of man are proportioned to his destinies”; in other words, that every desire predicts its own satisfaction. Yet all experience exhibits the reverse of this; the incompetency of power is the universal grief of young and ardent minds. They accuse the divine Providence of a certain parsimony. It has shown the heaven and earth to every child and filled him with a desire for the whole; a desire raging, infinite; a hunger, as of space to be filled with planets; a cry of famine, as of devils for souls. Then for the satisfaction,—to each man is administered a single drop, a bead of dew of vital power, per day,—a cup as large as space, and one drop of the water of life in it. Each man woke in the morning with an appetite that could eat the solar system like a cake; a spirit for action and passion without bounds; he could lay his hand on the morning star; he could try conclusions with gravitation or chemistry; but, on the first motion to prove his strength, —hands, feet, senses, gave way and would not serve him. He was an emperor deserted by his states, and left to whistle by himself, or thrust into a mob of emperors, all whistling: and still the sirens sang, “The attractions are proportioned to the destinies.” In every house, in the heart of each maiden and of each boy, in the soul of the soaring saint, this chasm is found,—between the largest promise of ideal power, and the shabby experience.

What, in some measure, so much of Davenport’s fictive assemblage attempts to combat.) Le chat Hippolyte, Pierre Loti’s cat—with the terminally “staunched” look of the “civilized”—is found in Henri Rousseau’s 1910 Portrait of Pierre Loti. 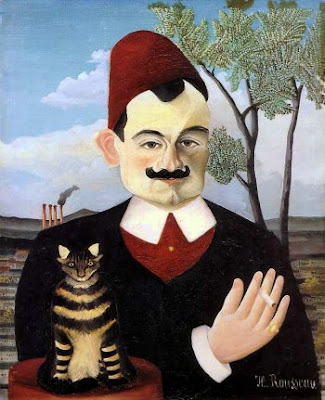