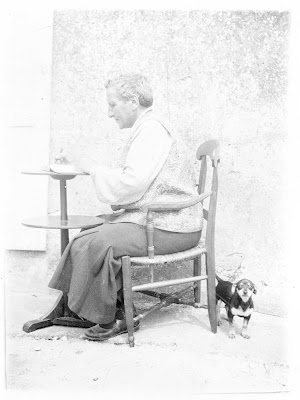 The weekend expended conducting a vehicle thither and yon, a/c kaput. Yon being next to Mayville, New York. A delivery of sorts. “They may lightly send it away to say / That they will not change it if they may / Nor indeed by the time that it is made / They may indeed not be careful that they were thankful / That they should distinguish which and whenever / They were not unlikely to mean it more / Than enough not to decide that they would not / Or well indeed if it is not better / That they are not cautious . . .” Gertrude Stein’s Stanzas in Meditation, natch. Rereading Ashbery’s 1957 “The Impossible”—appended with the title “The Impossible: Gertrude Stein” to the new Yale “corrected edition” of the Stanzas—and struck by the pertinence of:

Perhaps the word that occurs oftenest in the Stanzas is the word “they,” for this is a poem about the world, about “them.” (What a pleasant change from the eternal “we” with which so many modern poets automatically begin each sentence, and which gives the impression that the author is sharing his every sensation with some invisible Kim Novak.) Less frequently, “I” enters to assess the activities of “them,” to pick up after them, to assert her own altered importance. As we get deeper into the poem, it seems not so much as if we were reading as living a rather long period of our lives with a houseful of people. Like people, Miss Stein’s lines are comforting or annoying or brilliant or tedious. Like people, they sometimes make no sense and sometimes make perfect sense or they stop short in the middle of a sentence and wander away, leaving us alone for awhile in the physical world, that collection of thoughts, flowers, weather, and proper names. And, just as with people, there is no real escape from them . . .

(One wonders at the priggish audacity of the pronominal shift: where Ashbery’d writ “to assert his own altered importance,” one reads “to assert her own altered importance”—a rather unnecessary bit of historical updating; too, a semi-colon after “perfect sense” in the sentence beginning “Like people” is peremptorily removed—inflicting no little rhythmic havoc at no gain beyond a sense of wheeziness . . .) (Egg all down the phyiog. Where my complaints here assume editorial niggling, I see that Ashbery’s 2004 Selected Prose prints the piece—originally found in Poetry XC:4 (1957)—with the changes made, presumably, then, his own.)

Is the shifting play of pronouns an Ashbery borrowing off Stein? Is something like the small early piece “The Grapevine”—out of Ashbery’s 1956 Some Trees, that is, pre-“The Impossible”—essentially Stein-inflected?

Of who we are and all they are
You all now know. But you know
After they began to find us out we grew
Before they died thinking us the causes

Of their acts. Now we’ll not know
The truth of some still at the piano, though
They often date from us, causing
These changes we think we are. We don’t care

Though, so tall up there
In young air. But things get darker as we move
To ask them: Whom must we get to know
To die, so you live and we know?

Amidst such a barrage of imprecise and unattached particulars, one attaches oneself to that “piano,” or even to the “young air.” See Ashbery’s note of how, out of Steinian austerity—“‘stanzas’ . . . made up almost entirely of colorless connecting words”—any tossed down nounal tidbit flares up tangible and sweet: “like certain monochrome de Kooning paintings in which isolated strokes of color take on a deliciousness they never could have had out of context, or a piece of music by Webern in which a single note on the celesta suddenly irrigates a whole desert of dry, scratchy sounds in the strings.” Hence, “the impossible,” what Ashbery calls Stein’s “attempts to do what can’t be done, to create a counterfeit of reality more real than reality” (a line tempered by Ashbery’s earlier reference to “attempts to transmit a completely new picture of reality, of that real reality of the poet which Antonin Artaud called ‘une réalité dangereuse et typique.’”) Did Ashbery recall, in that “more real” William Carlos Williams’s formula “the perfection of new forms as additions to nature”? Or these lines out of Spring and All (1923):

Imagination is not to avoid reality, nor is it description nor an evocation of objects or situations, it is to say that poetry does not tamper with the world but moves it—It affirms reality most powerfully and therefore, since reality needs no personal support but exists free from human action, as proven by science in the indestructibility of matter and of force, it creates a new object, a play, a dance which is not a mirror up to nature but—
As birds’ wings beat the solid air without which none could fly so words freed by the imagination affirm reality by their flight . . .

(“Solid air” like that “certain monochrome” of de Kooning . . .) Ten years subsequent to “The Grapevine”—out of Ashbery’s “Soonest Mended”:

These then were some hazards of the course,
Yet though we knew the course was hazards and nothing else
It was still a shock when, almost a quarter of a century later,
The clarity of the rules dawned on you for the first time.
They were the players, and we who had struggled at the game
Were merely spectators, though subject to its vicissitudes
And moving with it out of the tearful stadium, borne on shoulders, at last.
Night after night this message returns, repeated
In the flickering bulbs of the sky, raised past us, taken away from us,
Yet ours over and over until the end that is past truth,
The being of our sentences, in the climate that fostered them,
Not ours to own, like a book, but to be with, and sometimes
To be without, alone and desperate.

Now I wish to tell quite easily well
Just what all there is of which to tell
Immediately increases hold as told
Or may they better be better be known
I have thought in thinking that is walking
That the way to be often more than told in walking
Is after all as much as told in walking
That they as well will be just not to have
Theirs be theirs now. It is not only this a change
But theirs might be
I have lost the thread of my discourse.
This is it it makes no difference if we find it
If we found it
Or which they will be bought if they worry or not
Without which if they begin or yet began
May they be equalled or equal in amount
When there is a doubt but most of course
Of course there is no doubt.

Hot in that car, brain-broiling hot.
Posted by John Latta at 6:51 AM