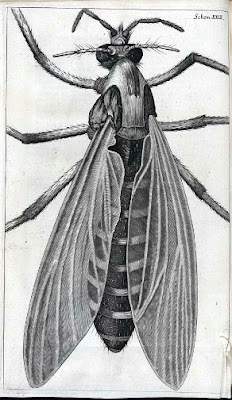 Robert Hooke, “Gnat,” out of Micrographia, or, Some physiological descriptions of minute bodies made by magnifying glasses (1665)

A calendar to tell the day;
A handkerchief to wave away
The gnats; a couch unstuffed with storm
Pouching a bottle in one arm;
A whiskey bottle full of worms;
And bedroom slacks; are these fit terms
To mete the worm whose molten rage
Boils in the belly of old age?

—James Schuyler, out of “Kennexth” (Other Flowers: Uncollected Poems, 2010)
—

Once upon a time, in some out of the way corner of that universe which is dispersed into numberless twinkling solar systems, there was a star upon which clever beasts invented knowing. That was the most arrogant and mendacious minute of “world history,” but nevertheless, it was only a minute. After nature had drawn a few breaths, the star cooled and congealed, and the clever beasts had to die.
One might invent such a fable, and yet he still would not have adequately illustrated how miserable, how shadowy and transient, how aimless and arbitrary the human intellect looks within nature. There were eternities during which it did not exist. And when it is all over with the human intellect, nothing will have happened. For this intellect has no additional mission which would lead it beyond human life. Rather, it is human, and only its possessor and begetter takes it so solemnly—as though the world’s axis turned within it. But if we could communicate with a gnat, we would learn that he likewise flies through the air with the same solemnity, that he feels the flying center of the universe within himself.

“What sort of insects do you rejoice in, where you come from?” the Gnat inquired.
“I don’t rejoice in insects at all,” Alice explained, “because I’m rather afraid of them—at least the large kinds. But I can tell you the names of some of them.”
“Of course they answer to their names?” the Gnat remarked carelessly.
“I never knew them do it.”
“What’s the use of their having names the Gnat said, “if they won’t answer to them?”
“No use to them,” said Alice; “but it’s useful to the people that name them, I suppose. If not, why do things have names at all?”
“I can’t say,” the Gnat replied. “Further on, in the wood down there, they’ve got no names.”

—Lewis Carroll, out of Through the Looking Glass (1871)

Why do gnats always get into white wine?

Some of them have a sharpe pricked weapon in their muzzle, as namely, the Breese or great Horse-flie, called in Latine Asilus or Tabanus, whether you will. Likewise Gnats also, and some kind of flies. And these prickes serve them in good stead both for mouth and tongue. Some of these are but blunt, and not good for to pricke, but onely handsome to sucke withall, as flies, which have all of them a tongue, beeing evidently fistulous and like a pipe.

. . . there be other Gnats, that soure things will engender.

. . . swarms of minute light-colored gnats, looking like motes in the sun.

On the willow oak under which Mikkel and Magnus were lying one summer afternoon there rained down every second on every square centimeter of long sunlit leaf a quintillion photons.
—A thousand quadrillion photons.
—What’s it look like as a number? Mikkel asked. And what are those midges doing, bouncing up and down in the air and turning like a wheel?
—They’re happy, Magnus said in a drowsy voice. You write quintillion with a one and eighteen zeros. That’s nothing compared to the neutrinos falling through the leaves rather than onto them, through us too, and the dithering gnats. They are so little that to them the spaces between the leaf’s atoms is like from here to the moon.
—Midges. Gnats are bigger. You think they’re happy, like us?
—They have minds. They’re frolicking in existential ecstasy, dancing and spiralling. The old Greeks put mind everywhere, as things have to know how to be. This tree knows how to be a tree . . .

. . . the fremitus of things, the jigget of gnats, drum of the blood, fidget of leaves, shiver of light, boom of the wind.

They were marching through a wide defile, hedged in by two chains of reddish hillocks, when a nauseous odor struck their nostrils, and they believed that they saw something extraordinary at the top of a carob tree; a lion’s head stood up above the foliage.
Running towards it, they found a lion attached to a cross by its four limbs, like a criminal; his enormous muzzle hung to his breast, and his forepaws, half concealed beneath the abundance of his mane, were widely spread apart, like a bird’s wings in flight; under the tightly drawn skin, his ribs severally protruded and his hind legs were nailed together, but were slightly drawn up; black blood had trickled through the hairs, and collected in stalactites at the end of his tail, which hung straight down the length of the cross. The soldiers crowded around the beast, diverting themselves by calling him:—“Consul!” and “Citizen of Rome!” and threw pebbles into his eyes to scatter the swarming gnats.

They are armed with a strong sharp beak or proboscis, shaped like a lancet, and sheathed in flexible thin valves; with this beak they instantly pierce the veins of the creatures, making a large orifice from whence the blood springs in large drops, rolling down as tears, causing a fierce pain or aching for a considerable time after the wound is made. There are three or four species of this genus of less size but equally vexatious, as they are vastly more numerous, active and sanguineous; particularly, one about half the size of the first mentioned, the next less of a dusky colour with a green head; another yet somewhat less, of a splendid green and the head of a gold colour; the sting of this last is intolerable, no less acute than a prick from a red-hot needle, or a spark of fire on the skin; these are called the burning flies. Besides the preceding tormentors, there are three or four species of the asilus or smaller biting flies; one of a grayish dusky colour, another much of the same colour, having spotted wings and a green head, and another very small and perfectly black: this last species lie in ambush in shrubby thickets and Cane brakes near water: whenever we approach the cool shades near creeks, impatient for repose and relief, almost sinking under the persecutions from the evil spirits, who continually surround and follow us over the burning desart ridges and plains, and here in some hopes of momentary peace and quietness, under cover of the cool humid groves, we are surprised and quickly invested with dark clouds of these persecuting demons, besides musquitoes and gnats (culex et cynips).

—William Bartram, out of Travels through North and South Carolina, Georgia, East and West Florida, the Cherokee Country, the Extensive Territories of the Muscogulges or Creek Confederacy, and the Country of the Chactaws. Containing an Account of the Soil and Natural Productions of Those Regions; Together with Observations on the Manners of the Indians (1791)
Posted by John Latta at 8:11 AM