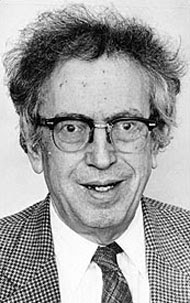 Hugh Kenner, out of Geodesic Math and How to Use It (1976), talking about constructing a Tensegrity (see R. Buckminster Fuller) out of string and straw-made struts:

The parabola has a theoretical zero point, where it touches the baseline, but this resembles the famous ideal point with position but no magnitude: we can never really say that it is occupied. In the real universe where winds blow, invisible forces tug, and molecules are in ceaseless motion, a Tensegrity will no more quite settle down than will anything else: there will always be minute motions, tiny strut displacements at the order of magnitude where elasticity multiplication is truly enormous and compensating forces have enormous advantage. The parabola’s zero point is that ideal condition of rest which nothing real ever attains, and about which a Tensegrity in particular dances an eternal jig of pre-Socratic derision.

To arrive at that (Guy Davenport points to its final sentence in a November 26, 1976 piece in National Review wherein, too, he reports how “a model cuboctahedron (a dozen sticks in orbit around nothing, untouching, kept from leaping all over the room by a cat’s cradle of strings)” unfailingly stops visitors: “The question ‘What is it?’ can only be answered in terms that double back to the fact that it is a model of itself . . .”*)—to arrive at Kenner’s “invisible forces tug, and molecules are in ceaseless motion” in the midst of rereading—dilatory, rapt, étonné encore—The Pound Era (1971) is to be struck by how consistent Kenner’s thinking is: “a model of itself.”

Two things: integrity of form and constant motility: “the vortex is not the water but a patterned energy made visible by the water.” (Isn’t Kenner suggesting that language itself is a vortex? “Language is not words but a patterned energy made visible by words.”**) In the chapter called “The Invention of Language,” a sense of how lively burgeonings in the fields of philology and etymology and lexicography*** precipitate a shift against the supposed aplomb of linguistic stasis****: out of a place wherein “Words, since the 18th century . . . seemed fixed upon a rigid and authorized grid, each little violation of which incited the Great Anarch” (see Pope’s Dunciad (1743): “Lo! thy dread empire Chaos! is restored: / Light dies before thy uncreating word; / Thy hand, great Anarch! lets the curtain fall, / And universal darkness buries all . . .”) one moves to “the slow discovery of language, a complex coherent organism that is no more the sum of its constituent words than a rhinoceros is the sum of its constituent cells, an organism that can maintain its identity as it grows and evolves in time; that can remember, that can anticipate, that can mutate.” The upshot: the processual poetics of high Modernism flowers forth largely out of a new sense of language’s own processual nature, words “in ceaseless motion.” Another species of “eternal jig of pre-Socratic derision.” (Davenport: “As for my cuboctahedron on the desk, it quivers all the time.”) 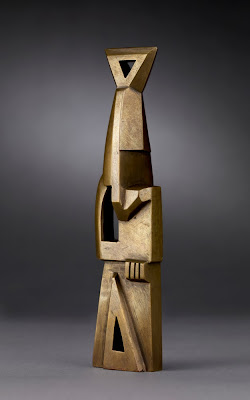 * “A model of itself.” The phrase (and the cuboctahedron) recall Kenner’s report of Gaudier-Brzeska’s cutting “about 1913” a brass toy—

that embodies in its four inches several hundred formal decisions: that two triangles, one fish-tailed, shall have open centers and beveled edges, that four finger-like rectangularities shall prolong but displace the downward thrust of a straight vertebral gesture, that next to that descent in high relief shall lie a concavity, its far side curved. . . . T. E. Hulme used it for a pocket toy to occupy his restless fingers. It is a sacred object, elusively anthropo- and ichthymorphic, with no god but its own vigor. I do not know what has become of it.

“No god but its own vigor.” Kenner: “God is concentrated attention; a work of art is someone’s act of attention, evoking ours; there have been great feats of attention.”

Language, which permeates our minds and obeys not the law of things but its own laws, which has an organism’s power to mutate and adapt and survive, and exacts obligation from us because no heritage is more precious. The things against which its words brush are virtually extraneous to its integrity.

Skeat’s Dictionary appeared in four parts, 1879-82; this last date was also the year of Joyce’s birth. In January 1884, when he was almost two, the first part of the New English Dictionary (A-Ant) was published. By the time he had commenced Ulysses it had reached the S’s and T’s. Its 125th and final fascicle is dated April 1928; several installments of the polyglot Wake were by then in print.
The insight behind the great Dictionary is that meanings, arrayed in chronological sequence, display a seamless intelligible continuity.

An elder colleague of Skeat’s, Richard Chenevix Trench, “gave the first impulse” to the N.E.D by a paper read before the Philological Society in 1857, and this same Trench (later Anglican archbishop of Dublin) had defined in 1851 the state of awareness, at length transmitted to Joyce by philological tradition, within which such a thing as Finnegans Wake was conceivable: “Many a single word . . . is itself a concentrated poem, having stores of poetical thought and imagery laid up in it.”

Thus Charles Olson, a century or so belatedly: “whatever you have to say, leave / the roots on, let them / dangle // And the dirt // Just to make clear / where they come from . . .”

With no grasp of language families, with no hint that linguistic morphology follows laws, and with only a few thousand years since Babel to contain all the borrowings and derivations that have ever occurred, ingenious people etymologized at whim. Johnson derived crocodile from Greek words meaning saffron-fearer, he did not say why, and was uncertain whether the peacock was named from its “peak” of head-feathers or from the French beaucoq. (He had the Latin pavo at hand, but no way of perceiving how Old English had made it into pāwa which became pēa.)