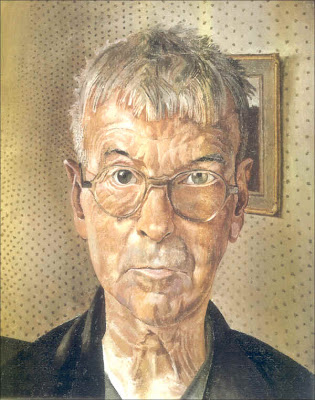 Stanley Spencer, out of Sermons by Artists (1934):

When I lived in Cookham I was disturbed by a feeling of everything being meaningless. But quite suddenly I became aware that everything was full of special meaning and this made everything holy. The instinct of Moses to take his shoes off when he saw the burning bush was similar to my feelings. I saw many burning bushes in Cookham. I observed this sacred quality in most unexpected quarters.

Every thing or person other than myself is a future potential part of myself, or a revealer of and an agent in revealing unknown parts of myself: unknown husbands, wives, lovers, worshippers, never before seen and only known by a persistent desire or passionate longing, supported by a kind of consciousness of their existence.

Distortion arrives from the effort to see something in a way that will enable [the painter] to love it.

She has been felt and fingered by him for fifty years. He has emptied himself into her about eighteen thousand times . . . Each new fold in her skin appearing as her age increased was a new joy to him . . . her old joints ached for the affection of his gnarled hands. She remained standing like a cow in the stall being milked as he smoothed out the creases between her knees and joints. The curve of each cheek of her buttocks hung and sagged like a wallet. She stood and he surveyed her as he does in the picture only now he does so from every angle . . . Some hours later when they were going to bed she said to him you know I feel wonderful with your stuff inside me. I think the idea of taking the sacrament must have come from this really. I can feel the virtue of you in me. 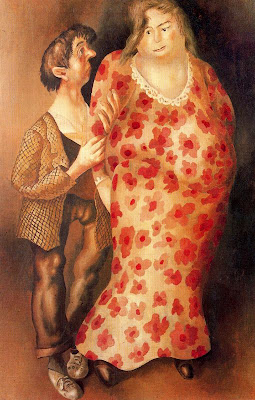 Roger Fry’s insistence, during the years when Bloomsbury was establishing its hegemony over British critical opinion, that the subject of a work of art is always secondary to technique calcified into a dogma: the subject of a work of art is negligible. Further mischief followed, which Fry did not intend. A perverse logic developed his dogma into the more insidious one that subject-matter is merely a pretext for the artist to demonstrate a style of painting. The artist, we were to understand, is not primarily interested in the meadow, or nude, or bowl of apples before him. He is only interested in the aesthetics (Fry’s great word) of their form.

Alexandra Harris, out of Romantic Moderns: English Writers, Artists and the Imagination from Virginia Woolf to John Piper (2010):

He had been interested in formal containment; he had simplified his shapes and schematized his colours, and he responded to Fry’s advocacy of early Italian murals. John Donne Arriving in Heaven (1911), the painting he gave to Fry and Bell for their exhibition, was a ceremonial orchestration of abstract, priestly figures occupying the canvas like monolithic standing stones. But Spencer’s imagination was too full of nature’s compelling detail for abstraction to take hold, and too much in thrall to the particular surroundings of Cookham. In the 1930s, when he returned there after a decade’s absence, every brick and flower in the village seemed uniquely fascinating. He wanted to paint it all with the worshipful attentiveness of the Pre-Raphaelite, recording each fallen leaf and blade of grass. No detail could be surrendered in the interest of formal design; to do so would be an act of desecration.* So he paints every petal in the straggly clump of Michaelmas daisies on the edge of a field, the neatly weeded ornamental gardens on terraced streets and the view from his window over gates and sheds . . .
. . . the inhabitants . . . bursting with sexual energy, embracing each other and gripping onto straggling tree roots, drawn together in a great orgasmic communion. . . . Each button and daisy . . . credited with the expressiveness of a face; dour chintz wrappers . . . mesmeric. Everything is holy and everything is connected. 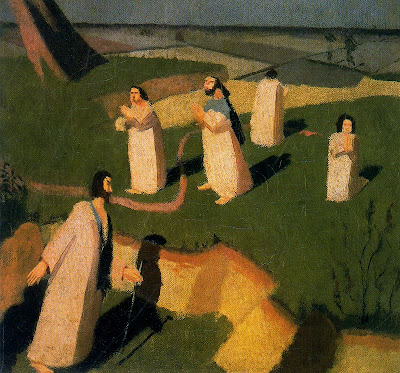 Guy Davenport, out of “Christ Preaching at the Henley Regatta” (1979):

A man in an ulster and cloth hat searches the pavements and edges of gardens for the droppings of dogs, which, if the way is clear, he puts in his pockets, for later inspection in his room above the Swan and Maiden. He is . . . Stanley Spencer.
A nanny across the street asks herself whatever is that man doing, and her charge, a boy in a sailor suit, reads her eyes and answers.
—Picking up dog shit and squirreling it away on his person.
— God save the poor sod, says the nurse.
— Now he’s pulling his pudding.
— Charles Francis!
An old woman in a plaid shawl has caught Stanley Spencer’s attention. She wears gaiters and a fisherman’s hat. The crop of white whiskers on her chin pleases Spencer. He imagines her as a girl, as a bride, as a woman getting fleshy about the hips, a woman who would cast her eyes upwards when she laughs . . .

He inspected shingles, brick, and windows. Bees stitched along the bells of a file of hollyhocks. Greatly comforted in God at Westchester, a voice came through a parasol. And ever so nice, ame shaw. And from a clutch of gaitered clergy, nothing but my duty and my sin.

Old Man Cézanne, he tells himself, was all very well for the French temperament, going at things logically, vibrating with a passion for the École Polytechnique, for ratios and microscopes, precisions and a constant polishing of everything with critical sandpaper. He was a Poussin run by electricity. But that woman there shaped like a bottle and her daughter shaped like a churn, they want to be seen by Cimabue, by Polish buttermold carvers, by eyes begot of the happy misalliance of stiff northern barbaric chopped wood sculpture, polychrome embroidery, and beaten gold with autumnal Roman giant stone: roundly ungainly, stubborn as barrels, solid as brick kilns.

Guy Davenport, out of “Stanley Spencer and David Jones”:

. . . bricks are but one example of a reticulated pattern in Spencer. This pattern has something to do with sexuality in its highest spiritual state, as witness the Angels of the Apocalypse (plaids, polka dots, stripes). The dog a boy is kissing in Sunflower and Dog Worship is a Dalmatian. 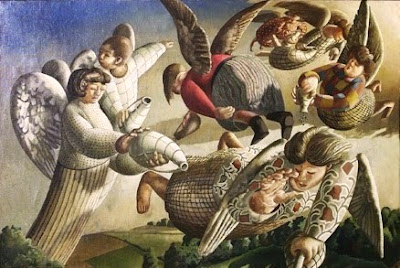 Stanley Spencer, “Angels of the Apocalypse,” 1929 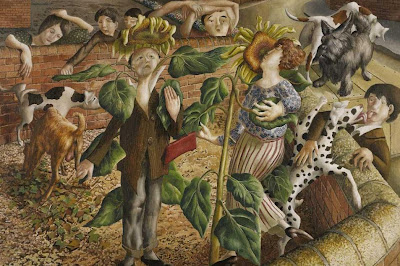 Without belief, without utter faith & confidence, there is impotence. A man raises a womans dress with the same passionate admiration & love for the woman as the priest raises the host on the altar.

I think I have been led to do the Resurrection subject through this sense of true meaning of things. I used to say ‘today is the world to come’ meaning that it contained as much & could express as much as that. I had a sense of this being born again; of approaching the ‘world to come’ when I was returning from Macedonia after all the years out there & never expecting to return. As I approach the lighthouse off the Isle of White in the dark & the light swinging round & round now on our ship now not; its wonderful. I ‘the unborn babe’ still in the ship—am having a little chat with a sort of angel who is giving me advice & some notion of what this life of mine in England is going to be like. In this imaginary converse I now & then get a little concerned at the future possibilities being foretold & raise my unborn eyebrow & way ‘nothing precipitate I hope?’

Guy Davenport, out of “Stanley Spencer and David Jones”:

How, then . . . to see Spencer? . . . Is he a mystic descending from the heaven-on-earth designers (St.-Simon, Fourier, Mother Ann Lee) with a hope for political reformation? Clearly, his sexual paintings constitute a critique of society as we know it, comically different from D. H. Lawrence’s, Ibsen’s, or the yeastier psychoanalysts with bees in their bonnets about a society without repressions. Not even Fourier, that most imaginative of Utopians, considered orgies with sunflowers and dogs. A plausible answer might be that he is a disillusioned visionary. Apolitical, but a democrat in the philosophical sense, eccentrically religious, honest, a realist in matters of the flesh, Stanley Spencer was before all else a poet for whom the natural beauty of the world—meadows, gardens, trees in blossom, rivers—was the primary fact. 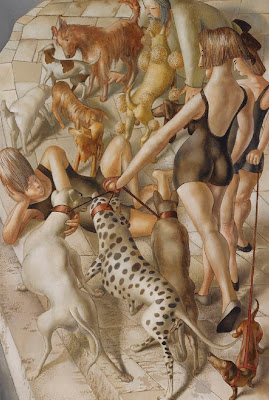 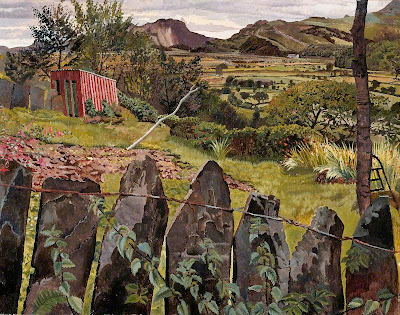