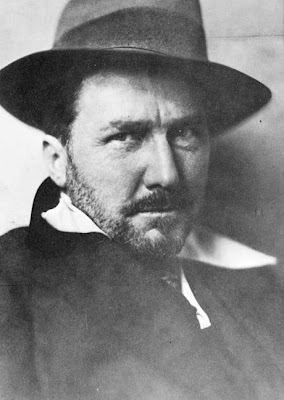 A pause. To consider how protean and undependable words can be. Writing like stringing together a necklace out of beads of mercury—shiny, motile, fissiparous, globular bits that hie out from under any defining weight. Malleable words, made-up words, words rendered skittish and intemperate by time’s own rampant lurch and recovery, its oddly human way of walking forth, a leaking sack of memory in tow. Kenner (The Pound Era), considering the epithet (οἶνωψ = “oīnōps”) Homer “applies 17 times to the sea and twice to oxen, and which Sophocles at one point applies to a human forearm.”:

We find it in Liddell and Scott’s Lexicon under a nominative singular form which occurs in no ancient text but has had to be invented to keep the lexicons consistent, and this invented form contains the judgment that the word is compounded from oinos, wine, and ops, eye or face. Wine-eyed? wine-faced? And of the sea, of oxen, and of a forearm? W. H. D. Rouse surmised that the etymology was false and the word simply an ancient blunder which there is no chance any longer of unstitching.* Tradition instructs us to understand that the sea, modified by this epithet, shall be understood to be “wine-dark,” and the oxen “deep red” or perhaps “brown.” About the Sophoclean forearm tradition leaves us free to guess. . . .
Lexicography is compendious illusion; words are strangely inexplicit; they “mean” here, here, here. And traditions of what we are to understand here and here . . . guide us so constantly that we are only aware of them when they lapse . . . Mr. Auden has described an entanglement with Keats’ lines,

The wakeful bloodhound rose, and shook his hide,
But his sagacious eye an inmate owns;

two meanings, “inhabitant” for “inmate” and “accepts” for “owns” having dropped out of the current vernacular . . .

Without which, using the scoured markers, one postulates “a lunatic who had removed the dog’s eye.” (Somewhere Kenneth Burke points to a word found “at the end of Aeschylus’ Eumenides, . . . a word that, in its simplest translation, means shout.” Only to report how “scholarship . . . admonishes us that this word in Greek stands for a particular kind of shout (a shout such as announces the rebirth of the ritually slain divinity).” Or there’s Kenner’s note of how the old meaning-anchor Latin no longer holds: “When Dr. Johnson writes of a radical idea branching into parallel ramifications he is relying on radix and ramus for the tree that sustains his metaphor. Once Latin goes out of mind radical commences its vernacular slide toward extreme, and ramification toward entanglement. Parole, decidedly, in libertà.)

Lining up some of Pound’s definitions:

An “Image” is that which presents an intellectual and emotional complex in an instant of time . . .

and (Kenner says, pointing to the shift out of any possibly inert stasis “just 20 months later”)—

The image . . . is a radiant node or cluster; it is what I can, and must perforce, call a VORTEX, from which, and through which, and into which, ideas are constantly rushing.*

Note how Kenner argues against a Poundian poetic stuck to the succinctly put principles of “A Retrospect”:

1.   Direct treatment of the “thing” whether subjective or objective.
2.   To use absolutely no word that does not contribute to the presentation.
3.   As regarding rhythm: to compose in sequence of the musical phrase, not in sequence of the metronome. . . .

—what Kenner calls “specifications for technical hygiene . . . which can be followed by any talented person . . . to write what may be a trivial poem.” Kenner:

Pound’s Imagism is energy, is effort. It does not appease itself by reproducing what is seen, but by setting some other seen thing into relation. The mind that found “petals on a wet, black bough” had been active (and for more than a year on that poem, off and on). The “plot” of the poem is that mind’s activity, fetching some new thing into the field of consciousness. The action passing through any Imagist poem is a mind’s invisible action discovering what will come next that may sustain the presentation—what image, what rhythm, what allusion, what word . . .

Continual unit-forming work. Metaphor-making central to it. (Pertinent here: Kenner, faulting I. A. Richards for “supposing that metaphor does not blaze with process but unites two things, called tenor and vehicle.”) And Pound, out of “The Serious Artist” (1913):

Poetry is a centaur. the thinking word-arranging, clarifying faculty must move and leap with the energizing, sentient, musical faculties. It is precisely the difficulty of this amphibious existence that keeps down the census record of good poets.

Later in that essay:

Aristotle will tell you that ‘The apt use of metaphor, being as it is, the swift perception of relations, is the true hall-mark of genius.’ That abundance, that readiness of the figure is indeed one of the surest proofs that the mind is up borne on the emotional surge.
By apt use, I should say it were well to understand, a swiftness, almost a violence, and certainly a vividness. This does not mean elaboration and complication.

Not belaboring mannerist décor. Not swerving off the thing itself. Making the continual apprehending of correspondences itself into “what is called thinking.” Kenner points out how “The ideal language”—see, say, Bishop Thomas Sprat’s 1667 reverie (out of The History of the Royal Society) for “a constant Resolution, to reject all the amplifications, digressions, and swellings of style: to return back to the primitive purity, and shortness, when men deliver’d so many things, almost in an equal number of words”—is a language without verbs, is “embarrassed by verbs, which it took for specializations of the copula, and scandalized by metaphor”: “When so many things are at last represented by an equal number of words, then everything will have its own name, and metaphor (whale’s acres, breast-cares) will be not only unneeded but excrescential.” According to Kenner, Fenollosa’s genius is to see précised how Chinese ideographs “supposed to correspond with things . . . corresponded with actions”:

His great, his unassailable originality stemmed from his conviction that the unit of thought was less like a noun than like a verb, and that Chinese signs therefore denoted processes (“the ideograph meaning ‘to speak’ is a mouth with two words and a flame coming out of it”). Metaphor so seen was a centrality, not an embarrassment (“Metaphor, the revealer of nature . . . The known interprets the obscure, the universe is alive with myth.”)

Fenellosa, “a Harvard-educated enthusiast [of Chinese] of Spanish descent,” who’d taught Emerson to Japanese in Tokyo: “there to find confirmation of Emerson’s etymologist who ‘finds the deadest word to have been once a brilliant picture.’”


One thinks, naturally enough, of Pound’s lovely rendering of a visit to Emil Levy, expert in Provençal, in Freiberg in 1911, copies of Arnaut Daniel in tow (Canto XX):

And he said: “Now is there anything I can tell you?”
And I said: “I dunno, sir,” or
“Yes, Doctor, what do they mean by noigandres?”
And he said: “Noigandres! NOIgandres!
“You know for seex mon’s of my life
“Effery night when I go to bett, I say to myself:
“Noigandres, eh, noigandres,
“Now what the DEFFIL can that mean!”

** How derivative Olson’s “high energy-construct” in the 1950 “Projective Verse” seems of a sudden: even the paced breathlessness of “get on with it, keep moving, keep in, speed, the nerves, their speed, the perceptions, theirs, the acts, the split second acts, the whole business, keep it moving as fast as you can, citizen” recalling Pound’s syntax.