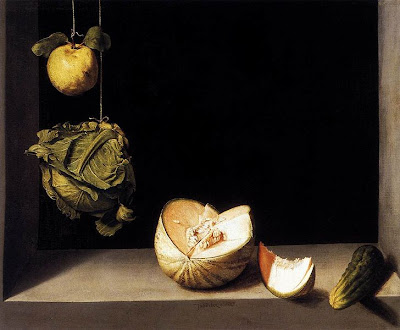 And still she slept an azure-lidded sleep,
In blanched linen, smooth, and lavender’d,
While he from forth the closet brought a heap
Of candied apple, quince, and plum, and gourd ;
With jellies soother than the creamy curd, And lucent syrops, tinct with cinnamon . . .

Quince is in Greek poetry (Ibycus, for example) a Cydonian apple, and botanically it is a Cydonian pear (Pyrus cydonia). Cydonia is in Crete, or as the Elizabethans (Chapman, for example) called it, Candy, so that “Candied apple, quince” reads “apple and pears from Crete, where Cydonia is, the sacred precinct of Aphrodite.”

—Guy Davenport, out of Objects on a Table: Harmonious Disarray in Art
and Literature(1998)

The quince tree is of a low stature; the branches are diffused and crooked; the flower and fruit is like that of the pear tree; but, however cultivated, the fruit is sour and astringent, and is covered with a kind of down: of this the species are six.
Miller.

They call for dates and quinces in the pastry.
Shakesp.

A quince, in token of fruitfulness, by the laws of Solon, was given to the brides of Athens upon the day of their marriage.
Peacham on Drawing.

—Samuel Johnson, out of A Dictionary of the English Language (1755)

Next to Pine apples, for big and large, are the Quinces, which we call Cotonea, the Greeks Cydonea, because they were first brought out of Candie. So heavie and massie they be, that they bend the boughs to the ground as they hang upon the tree, and will not suffer their mother to grow.
Many kinds there be of Quinces, to wit, Chrysomela, of a colour inclining to gold, & divided by certain cut lines. Secondly, there be the Quinces of our owne country, and so called*: these be whiter, & of an excellent smell. They also that come out of the realm of Naples, be highly esteemed. Now there be a smaller sort of the same kind called Struthea [i. the Peare-quince] & those doe cast a more odoriferous smell: late they be ere they come to ripenesse or perfection; whereas contrariwise the greene Quinces called Mustea, be as hastie and soone melow. Now if a man doe graffe the great Quinces upon the Struthea, the tree will bring foorth a kind of Quinces by themselves called Mulviana; and these are the Quinces alone of all other that may be eaten raw. In summe, all the sort of these are come now adaies to be entertained within the waiting or presence chamber of our great personages, where men give attendance to salute them as they come forth every morning; and in bed-chambers also they are to garnish the images standing about the beds heads and sides.
There are besides small wild Quinces, next to the Peare-quince Struthea, for pleasant and odoriferous smell; and they grow commonly in hedge-rowes.

They dined on mince and slices of quince,
Which they ate with a runcible spoon.
—Edward Lear, out of “The Owl and the Pussycat” (1871)

And in Cascadia also

As in the first line of a nursery rhyme

Against cyclic hum of the heating apparatus

There were priests posing as nuns,
quinces and stuff.

Tilt me a little more to the sun,
I want to see it one last time. There,

that’s just fine, I’ve seen it.
You can roll me inside. On wings of what perturbation?

I need not tell a magpie how to judge eggs but might I be supernumerary to this extent? On my left hat-brim, could the white wisps be effaced? And the back side of the dollar clip; i.e. where the clip is not right-side out I think it detracts. Could the twine on the stems of the flowering quince be darkened? Could the speckling of my eyebrows be overcome—especially along the lower ledge of the right eye? . . . Photography is a great help in these matters.

The apple rots, and the quince decayeth, and one by one they perish; the petals of the rose fade! I send thee my tears bound in a napkin, and what though the napkin burns, if my tears reach thee at last!

—Theocritus, out of the Idyls, translated by Andrew Lang (1880)

The love-hour is ended.
Swallow-wings, dreams of a spiked iris,
Gipsy your eyes.

The hollows under your knees are sweet with love.
Your knees are quince-blossoms, bent back by the rain . . .

Now labor his reward receives,
For ADORATION counts his sheaves,
To peace, her bounteous prince;
The nect’rine his strong tint imbibes,
And apples of ten thousand tribes,
And quick peculiar quince.

The whole world, he said, is a correspondence. And everything comes in a chord. The chord contains eight items. The center of the chord is the pivot. At one end of the chord is the avant-garde, and at the other end is the arrière-garde. In a fruit chord, let’s say, you have at one end the ripest golden pear, and at the other end is the quince, which never ripens. It remains as hard as a rock. And all of these corresponded with personalities . . .

Quince and vermilion for the common man.
—John Latta, “To James Schuyler in Heaven” (2010)

Way-laid made it known as quince cake. This is a perfect sentence because it refers to regretting.
—Gertrude Stein, out of “How to Write” (1931)

Hints obiter are:—not to permit delicacy and exquisiteness to seduce into effeminacy. Not to permit beauties by repetition to become mannerisms. To be jealous of fragmentary composition,—as epicurism of genius, and apple-pie made all of quinces.

—Samuel Taylor Coleridge, “written in Mr. Lamb’s copy of the ‘Dramatic
Scenes,’” out of Literary Remains
Posted by John Latta at 7:00 AM