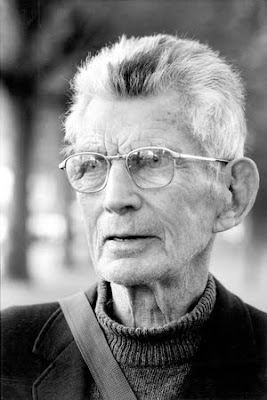 Reading’s routine miasma (reading being its own miasma—out of the Greek μίασμα stain, defilement < μιαίνειν to stain, sully, defile—reading staining and straining certainty with infectious turns, ways out beyond itself into other readings, dropping “its miasmata on the pinions of every breeze . . .”) Viral onslaught of words. To end up undone, surrounded by the unfinished books of one’s undoing. The kind of thing that points the reader implacably back into the world, in order to make a new room for moving, a temporary thing, untrammeled by words. (Virginia Woolf, out of Between the Acts: “Dispersed are we, the music wailed. Dispersed are we.”)

Why not remain there, detailing the weighty incumbency of drift and perusal? Why exit that room at all? Beckett (in a 1 June 1949 letter to Georges Duthuit):

I am reading Around the World in 80 Days. It is lively stuff. Do you remember Fogg’s lunch at the Reform Club, made up of “an hors d’oeuvre, boiled fish with a first-rate ‘Reading Sauce’, scarlet roast beef stuffed with stalks of rhubarb and gooseberries, a piece of chester, the whole thing washed down with a few cups of excellent tea.”
Bella menzogna = beautiful lie, quite simply. I think it is in the Convivio. Poetry was something else, of course, but there had to be some falsehood in it, as well founded as possible.

The comestibles of world invariably accompanied by “une ‘Reading Sauce’ de premier choix” put up against (run through by) Dante’s bella menzogna. Miasma hoedown. It’s rather like Kafka’s observation in the Diaries (8 September 1911): “How easy it is for a grenadine and seltzer to get into your nose when you laugh (bar in front of the Opéra Comique).” Reading’s sour fizz into significance, its invasive prickliness, its damned convivial wash. (I suspect the “carbonated splutter” of that wren—isn’t that straight out of reading Merrill Gilfillan?) Beckett in another mode (out of a note—called “Humanistic Quietism”—regarding Thomas McGreevy’s Poems, in Disjecta: Miscellaneous Writings and a Dramatic Fragment):

All poetry, as discriminated from the various paradigms of prosody, is prayer. A poem is poetry and not Meistergesang, Vaudeville, Fragrant Minute, or any of the other collects for the day, in so far as the reader feels it to have been the only way out of the tongue-tied profanity.

Tongue-tied by reading, made unclean by it. Direct address to the world and its holy inhabitants (that urge to glossolaliac reconnoitering, spouting out nonesuch hebetudes to the trees and rocks, surely that cometh not of bookishness . . .) And (Beckett again):

To know so well what one values is, what one’s value is, as not to neglect those occasions (they are few) on which it may be doubled, is not a common faculty; to retain in the acknowledgment of such enrichment the light, calm and finality that compose it is an extremely rare one. I do not know if the first of these can be acquired; I know that the second cannot.

In lieu of the “calm and finality” of the world’s own means (I think of lines somewhere “to thump the earth / and be stilled by it”), I recall O’Hara’s “Light       clarity       avocado salad in the morning” ending with “all thoughts disappear in a strange quiet excitement / I am sure of nothing but this, intensified by breathing” (see, too, in “Personism”: “. . . when I get lofty enough I’ve stopped thinking and that’s when refreshment arrives.”)