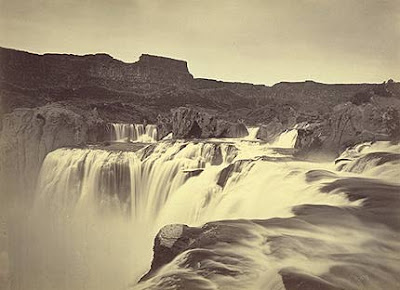 “The igloo sun, while I was away,
Chastened the wolverine towels.
Isn’t Idaho the wolverine state
Anyway Ohio is the flower state
New York is the key state.
Bandana is the population state.
In the hay states of Pennsylvania and Arkansas
I lay down and slept.
The cross delirium tremens state of Mississippi
Led me to further discoveries:
Timbuctoo, for instance. And Ashtabula,
The towel city . . .”

A unique rolling stone, gathering–or thinking he would gather–a unique kind of moss, he spent many summers wandering from spa to spa. His complaint was difficult to cure because it was both vague and variable: attacks of melancholy when his mind would be benumbed with unspeakable forebodings and nothing except an abrupt change of surroundings could bring relief; or else a recurrent state of physical distress marked by shiverings when no abundance of clothing could warm his limbs and when the only thing that helped, if persistently repeated, was a brisk walk–the longer the better. The paradox was that while needing constant movement to prompt inspiration, this movement physically prevented him from writing . . . Dresden, Bad Gastein, Salzburg, Munich, Venice, Florence, Rome, Florence, Mantua, Verona, Innsbruck, Salzburg, Karlsbad, Prague, Greifenberg, Berlin, Bad Gastein, Prague, Salzburg, Venice, Bologna, Florence, Rome, Nice, Paris, Frankfurt, Dresden,—and all over again, this series with its repetitions of names of grand tour towns is not really the itinerary of a man seeking health—or collecting hotel labels to show in Moscow, Idaho, or Moscow, Russia—but merely the dotted line of a vicious circle with no geographical meaning.
—Vladimir Nabokov, out of “Nikolay Gogol (1809-1852)”
(Lectures on Russian Literature (1981)

O all ye isolate and separate powers, Sing! Sing, and sing in such a way that from a distance it will seem a harmony, a Strindberg play, a friendship ring . . . so happy—happy, happy, happy—as here we go hand in handling, up and down. Our union was a singing, though we were silent in the songs we sang like single notes are silent in a symphony. In no sense sober, we barbershopped together and never heard the discords in our music or saw ourselves as dirty, cheap or silly. Yet cats have worn out better shoes than those thrown through our love songs at us. Hush. Be patient—prudent—politic. Still, Cleveland killed you, Mr. Crane. Were you not politic enough and fond of being beaten? Like a piece of sewage, the city shat you from its stern three hundred miles from history—beyond the loving reach of sailors. Well, I’m not a poet who puts Paris to his temple in his youth to blow himself from Idaho, or—fancy that—Missouri. My god, I said, this is my country, but must my country go so far as Terre Haute or Whiting, go so far as Gary?

No but who said anything about drilling hey see it’s just this here timber up there like if we leased these here rights off them to help them out like we could . . . No listen it would too hey because some of these here Indians were real broke which wanted to divide up this whole preservation and sell off their . . . what? Oh, okay anyways see if we lease these here rights off the whole tribe these here broke Indians get something and we’re like bailing them out, see so I was thinking like if . . . No it’s like out by those Alberta and Western sites under them you know? like near all those mineral claims by you know where that big green state that goes along the top of . . . no where they’re like all by this here Great Lake under where Minnesota and Idaho both where? No because hey Nebraska’s like way out with Kansas and all beside Utah or someplace anyways I was just thinking, see . . .

Names
“Chippewa” is the best name for the new n.w. Territory /

“Idaho” (gem of the mountains) is not a very appropriate name.—would have been better, applied to Colorado. /

The great western mountain peaks (Colorado) three or four of them, (as Pikes Peak) among the grandest in the world, are seriously injured by vulgar names . . .

—Walt Whitman, out of Notebooks and Unpublished Prose Manuscripts (1984)
“Inscribed in black ink on scrap of white wove paper . . .
No date can be assigned other than before November, 1885.”

I live in Idaho. No, I live in Saint Paul. No, DerryWheat. No, a Placer Del Sol. Perhaps CleatRanch Western? Or a Marrywell, Delaware. Eventually the rosters fine down to Rhode Island, palace of brad arts and the costume brine resorts. Here I carefully casually placed each rock in its separation paperbox, thinking them all eggs. What did I know in peacefully grounded window with the sun going off the dog. Illimitable breakfastfood message packs. Whines behind the radiator. Lump seeded yard flats with vanilla. The car again had gone away on my poem. Once again wholly I was handed back, bright sun on nothing to do starring. Worry not, whatever of the past you’ve forgotten you have made up. Never go back to highschool, never recapped on foot stool. Evidently enough tests gone past. Lincoln Logs to Gabby Hayes. My trains went down the garbage, the cellar which is desire.

Nothing is weird here. Not even
Captain Jack’s Chaps, showing
the history of all the crawling bugs
in Idaho . . .

Arrived at the Emerald City, Dorothy and friends were fitted with dark glasses, to filter the glitter and glare of it all, which otherwise would have blinded them. The Emerald City is Hollywood itself—theater!—manipulating us, with a dishonesty comparable to a politician’s, through our eager suspension of disbelief.
How many American artists and writers have fled their barren Kansas or its equivalent, for a glittering Emerald City: Pound from Idaho, Eliot from Missouri, Crane from Chagrin Falls—the list is endless. And wherever they find themselves—Greenwich Village, London, the Left Bank, Bolinas—it is the Emerald City . . . and the green spectacles continue to protect their aging eyes.

and accurate in its
expression

of the thing they
would destroy—

with a little card
hanging

under it to tell
the persons

it runs, it is Geo.
Shoup

of Idaho it wears
a beard

women from a river
Trumbull

Even in Chicago as the brilliant young economist he lived pioneerfashion. . . . He kept his books in packingcases laid on their sides along the walls. His only extravagances were the Russian cigarettes he smoked and the red sash he sometimes sported. He was a man without smalltalk. When he lectured he put his cheek on his hand and mumbled out his long spiral sentences, reiterative like the eddas. His language was a mixture of mechanics’ terms, scientific latinity, slang, and Roget’s Thesaurus. The other profs couldn’t imagine why the girls fell for him so. . . .
Tongues wagged so (Veblen was a man who never explained, who never could get his tongue around the essential yes . . .) that his wife left him and went off to live alone on a timberclaim in Idaho and the president asked for his resignation.
Veblen went out to Idaho to get Ellen Rolfe to go with him to California when he succeeded in getting a job at a better salary at Leland Stanford, but in Palo Alto it was the same story as in Chicago. He suffered from woman trouble and the constitutional inability to say yes and an unnatural tendency to feel with the workingclass instead of with the profittakers. There were the same complaints that his courses were not constructive or attractive to bigmoney bequests and didn’t help his students to butter their bread, make Phi Beta Kappa, pick plums off the hierarchies of the academic grove. His wife left him for good.

Aint been a soul listening because no one listens to a bum all the other bums are blagdengabsting and you cant find nor finangilate yr way out of that—all talking at the same time and all of them confused. You have to go back to the railroad man to understand.—Like, say, you ask a man “Where’s track 109?” —nu—if it’s a bum he’ll say “Cart right over there dadday, and see if the old boy in the blue bandana knows, I’m Slim Holmes Hubbard from Ruston Louisiana and I got no time and got no knowledge to make me ways of knowin what where that track 109—only thing’s I got, is—I want a dime, if you can spare a dime I’ll go along my way peacefully—if you can’t I’ll go along my way peacefully—ya cant win—ya cant lose—and from between here to Bismarck Idaho I got nothin but lost and lost and lost everything I had.” You’ve got to admit these bums into your soul when they talk like that . . .

—Jack Kerouac, out of “The Railroad Earth” (Lonesome Traveler, 1960)

Ron Padgett . . . showed up in Essex, with news of his discoveries in French poetry (Re- verdy, Max Jacob) and stories about the Tulsa days, when Ron, Dick Gallup, Joe Brainard and Ted had all been “on fire with being there.” Donald Davie didn’t know what to make of any of this. Ed Dorn was one thing, but Dorn was at least serious. When Davie asked Padgett a question about Idaho—a place where Davie had never been, but which he’d read about in Dorn’s poems—Ron grinned and said that the only thing he knew about that state was that Judy Garland had been born there, in a trunk . . . a non-sequitur which left Davie stumped.

I was born in a trunk
In the Princess Theatre in Pocatella, Idaho
It was during the matinee on Friday . . .

So I grew up in a crazy world of dressing rooms
And hotel rooms and waiting rooms
And rooms behind-the-scenes.
And I can’t forget the endless rows
Of sleepless nights and eatless nights
And nights without a nickel in my jeans.

But it’s all in the game and the way you play it
And you’ve got to play the game you know.
When you’re born in a trunk at the Princess Theatre
In Pocatello, Idaho.