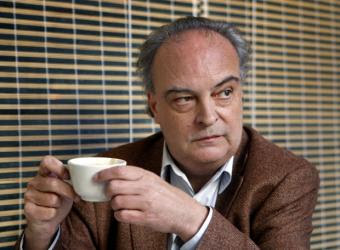 She is a great lover of the art of quotation and very specifically of Godard’s technique from his early period, when he inserted quotations, the words of others—real or invented—into the action of his films.

Gonzalez-Foerster “is trying to create an apocalyptic culture of the literary quotation, a culture of the end of the line . . . or the end of the world.” In the Turbine Hall of the Tate Modern she is putting together a piece that locates one in “a London of 2058, where it has been raining cruelly, without let-up, for years”:

The idea . . . is that one sees how a great flood has transformed London, where the incessant rainfall over the last few years has had strange effects; there have been mutations in the urban sculptures, which, invaded by damp, have not just eroded, but have also grown monumentally, as if they were tropical plants or thirsty giants. In order to stop this tropicalization or organic growth, they are stored in the Turbine Hall, surrounded by hundreds of mental bunks that, day and night, cradle men who sleep, and other vagabonds and refugees from the flood.

(Other details of the exhibit: “books by Philip K. Dick, Robert Walser, Stanislaw Lem, James Joyce, Fleur Jaeggy, Jean Echenoz, Philip Larkin, Georges Perec, Marguerite Duras, W. G. Sebald . . .”; “undefined music . . . like an echo of the orchestra that went down with the Titanic” or “distorted jazz . . . a hybrid style that, one day, will be called electric Marienbad.”) Flood and barrage, distort and reverb, monumental glut and tedium—all the ingredients of contemporary cyber-“culture,” its rampancy like a cancer. The “men who sleep” do so out of avoidance and refusal, info-shy in the quasi-allegorical style. (Another seeming allegory: of “going off on mental tangents and making life more complicated than necessary.” The story of the Italian novelist “Carlo Emilio Gadda, who was a neurotic as admirable as he was phenomenal”:

Gadda threw himself into the page he was writing, with all his obsessions. And everything he did was incomplete. In a short article about risotto alla milanese, he made things so complicated that he ended up describing the grains of rice, one by one—including the moment when each one was still enveloped in its little husk, the pericarp—and naturally, he was unable to ever finish the text.

What to do, though, with Larry O’Sullivan? Presented by Vila-Matas as “the Boston poet” and “very American” and “a master of putting trivial close to the lyrical.” One character—a Columbian by the name of Ricardo—talks up Larry O’Sullivan’s work to Vila-Matas’s protagonist Samuel Riba:

. . . recites a few line about walking through downtown Boston: “I go get a shoeshine / and walk up the muggy street beginning to sun / and have a hamburger and a malted and buy / an ugly NEW WORLD WRITING to see what the poets / in Ghana are doing these days . . .

O’Hara’s “The Day Lady Died,” of course, only slightly butchered. Why the odd maneuver of such a poorly arranged skein hiding no identity? Though it may (hide). I find myself examining each and every literary factoid for signs of inauthenticity: Is Vilém Vok, author of The Center real? (Yes.) Did Fernando Pessoa write a book called The Education of the Stoic? (Yes.) Did Hugo Claus write a book called The Sorrow of Belgium? (Yes.) Did Julien Gracq, author of The Opposing Shore, talk in a thunderstorm of bolts of lightning as “the unleashing of erroneous energy”? (Perhaps.) Is there something slyly self-referential about any number of such references?

Vila-Matas’s Samuel Riba (“he likes to see himself as the last publisher”***), propounding a “theory of the novel that, based on the lessons apparent to him the moment he opened The Opposing Shore, established five elements he considered essential for the novel of the future”:

These essential elements were: intertextuality; connection with serious poetry; awareness of a moral landscape in ruins; a slight favoring of style over plot; a view of writing that moves forward like time.

Not, of course, unlike the elements of Vila-Matas’s own novels.


* Translated out of the Spanish by Anne McLean and Rosalind Harvey.

** Excerpts: “For the broth, boil beef with carrot and celery, all three from the Po Valley, not a retired bull, with a Balkan spirit and horns . . .” And: “For the saffron . . . Carlo Erba Milan in sealed vials: this will run you ten twelve, at most fifteen lire per person: half a cigarette. Do not deceive the gods, do not forget Asclepius, do not betray your family, nor the guests protected by Jove Xenios, in order to deprive Carlo Erba of its reasonable profit. No!” And: “Risotto alla milanese must not be over-cooked, no, not at all! It should be served just a little more than al dente . . . the grains still individuals, not stuck to their companions, not softened into a slime, into a soup that could prove to be unpleasant.” The recommended rice: “Large-grained Vialone, shorter and plumier than the Carolina grain . . .” and never “entirely deprived of its pericarp.”

*** History of the literary publisher as book thief (anecdotally, hardly uncommon) and history of a purity of motif absconded:

Riba starts to remembering that his vocation as a publisher began during a trip to Paris after May ’68. As he was stealing left-wing essays with unusual happiness from the François Maspero bookshop—where the booksellers looked kindly upon people looting the place—he decided to devote himself to a profession as noble as that of publishing avant-garde novels and rebellious books that later enthusiasts would steal from the Maspero and other left-wing bookshops. Some years afterward, he changed his mind and gave the revolutionary dream up for dead and decided to be reasonable and charge for the books he published.