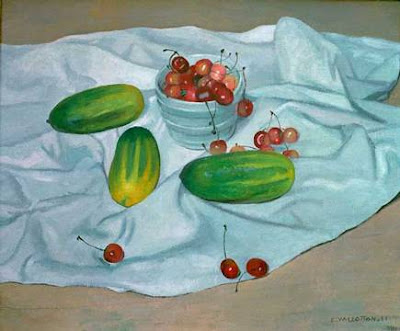 “Start her, start her, my men! Don’t hurry yourselves; take plenty of time—but start her; start her like thunder-claps, that’s all,” cried Stubb, spluttering out the smoke as he spoke. “Start her, now; give ’em the long and strong stroke, Tashtego. Start her, Tash, my boy—start her, all; but keep cool, keep cool—cucumbers is the word—easy, easy—only start her like grim death and grinning devils, and raise the buried dead perpendicular out of their graves, boys—that’s all. Start her!”

The first man I saw was of a meagre aspect, with sooty hands and face, his hair and beard long, ragged, and singed in several places. His clothes, shirt, and skin, were all of the same colour. He has been eight years upon a project for extracting sunbeams out of cucumbers, which were to be put in phials hermetically sealed, and let out to warm the air in raw inclement summers. He told me, he did not doubt, that, in eight years more, he should be able to supply the governor’s gardens with sunshine, at a reasonable rate; but he complained that his stock was low, and entreated me “to give him something as an encouragement to ingenuity, especially since this had been a very dear season for cucumbers.”
—Jonathan Swift, out of Travels into Several Remote Nations of the World, in Four Parts. By
Lemuel Gulliver, First a Surgeon, and then a Captain of Several Ships (1726)

We manage well enough with the elements, but when the elements become men, not so well; for they are no longer . . . pure, but have such quantities of alloy as to make them of very questionable use. You can extract sunbeams from cucumbers, but there is more cabbage than sunlight; & phosphate from cows, but the chemical phosphate is better.

Not the smallest event enlivens our little sandy village: we have not even rigged out a hay cart for a whortleberry party. If I look out of the window there is perhaps a cow; if I go into the garden there are cucumbers; if I look into the brook there is a mud turtle. In the sleep of the great heats there was nothing for me but to read the Vedas, the bible of the tropics . . . It is sublime as heat and night and a breathless ocean.

The Medeola [Medeola virginiana or Indian Cucumber] has blossomed in a tumbler— I seem to perceive a pleasant fugacious fragrance from its rather delicate but inconspicuous green flower— Its whorls of leaves of two stages are the most remarkable. I do not perceive the smell of the cucumber in its root.

What in the cut with any money and so, and so the climate is at stake, all the circular receipts are pears and linen is the stall to peep, likely and more the season’s chair and little grasses with a pole all the occasion is the wreath and many houses are baked. Many have the same in came and all the light is many wet all the burst in in the man and best to hide is only sweet. All is that and a little haste, a little pleading with a clouded pup all is chance to be the curl that sets and all the winding causes. All of it cucumber.

I am their crude and their sublimate, their precipitate and their unctuous, their male and their female, sometimes their hermaphrodite; what they list to style me. It is I that am corroded and exalted and sublimed and reduced and fetched over and filtered and washed and wiped; what between their salts and their sulfurs, their oils and their tartars, their brines and their vinegars, you might take me out now a soused Mercury, now a salted Mercury, now a smoked and dried Mercury, now a powdered and pickled Mercury: never herring, oyster, or cucumber passed so many vexations; my whole life with ’em hath been an exercise of torture; one, two, three, four and five times an hour ha’ they made me dance the philosophical circle, like an ape through a hoop, or a dog in a wheel.

—Ben Jonson, out of “Mercury Vindicated from the Alchemists at Court” (1616)

Beat stellar bottoms Emerson’s noble chemistry
Poured out
Sunshine from cucumbers come true.
Or is the shine of any kid’s pants seat
Reared from the floor
On a rainy day
A sign the solar universe
Is not running down . . .

Wasn’t it just divining that dog of a dag in Skokholme as I sat astrid uppum their Drewitt’s altar, as cooledas as culcumbre, slapping my straights till the sloping ruins, postillion, postallion, a swinge a swank, with you offering me clouts of illscents and them horners stagstruck on the leasward! Don’t be of red, you blanching mench. This Isabella I’m on knows the ruelles of the rut and she don’t fear andy mandy . . .

Everybody remained mutely separate, either to make his tedium the rapture of gall and hyssop, or to wound human flesh. Golem skulked into candy stores or hid in halls to shun a familiar face; he imagined satyric hair sprouting from an ear, a lewd, bulby underlip made him diet for a week on fish, the radish, raw peas, and shun the amative artichoke and priapic cucumber.

We remember the fish which wee did eate in Egypt freely: the cucumbers and the melons, and the leekes, and the onions, and the garlicke.

Torrential rains, water rising at Fort, my husband’s cucumbers & squash swimming. Depend on nothing . . .

Sunshine from cucumbers. Here was a man who has occupied himself in a nobler chemistry of extracting honor from scamps, temperance from sots, energy from beggars, justice from thieves, benevolence from misers. He knew there was sunshine under those moping churlish brows, elegance of manners hidden in the peasant, heart-warming expansion, grand surprises of sentiment, in these unchallenged, uncultivated men, and he persevered against all repulses until he drew it forth.
Now his boors are orphans are educated, his boors are polished, his palaces built, his pictures, statues, conservatories, chapels adorn them. He stands there prince among his peers, prince among princes. The sunshine is out & all flowing abroad over the world.

Cucumbers Set by Bees.—If bees, who are much the best setters of cucumbers, do not happen to take kindly to the frames, the best way is to tempt them by a little honey put on the male and female bloom. When they are once induced to haunt, they set all the fruit, and will hover with impatience round the lights in a morning, till the glasses are opened. Probatum est.

—Gilbert White, out of The Natural History and Antiquities of Selborne (1789)

It’s a little strange, I guess. It’s in an old brownstone, and is what Kenward accurately calls a pensione. I share a large bath, in which there is a small refrigerator. The first time I looked inside it there were six large cucumbers . . .

“How do you know that?”
“Can tell by the way he watches television.” The two of them had gone off to watch Twi-Nite Theatre, which tonight featured John Ritter in The Bryant Gumbel Story, and soon they were deep into a discussion of Tubal nuances that could have gone on all night, but Hector had to run up to the Cucumber Lounge to catch Biliy Barf and the Vomitones, who might, if they’d work cheap enough, do some of the music for the movie. He didn’t get to the Cuke quite in time to miss Ralph Wayvone, Jr., in a glossy green suit accented with sequins, who was cracking jokes into the mike to warm this crowd, who in Ralph’s opinion needed it, up.
Things work out funny sometimes . . .