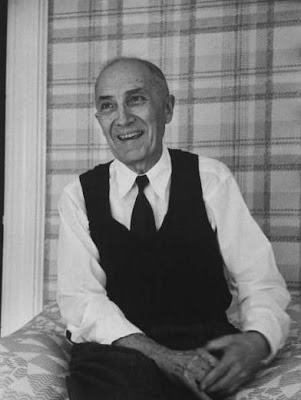 Muriel Rukeyser (out of the Wendell Willkie biography / documentary poem, One Life): “All is leaf. This simplicity makes possible the greatest diversity.” Recalling Pound’s “leaf over leaf” or “ply over ply” (the base accumulating construct in all its repeatables) or the loud nod at the “Oirishman” Scotus Erigena in Canto LXXIV:

“sunt lumina” said the Oirishman to King Carolus,
“OMNIA,
all things that are are lights”

(Browsing around The Cantos, I note the final line of Canto LXXX—“sunset grand couturier”—and mutter vaguely how it nods at that of Apollinaire’s “Zone”—“soleil cou coupé”—though rather mockingly, inserting the latest finickings of “style” into Apollinaire’s primeval bloody sun-slaughter . . .) All that making me think of the work of “gussying up” versus that of “stripping down.” Bill Berkson, in reply to Bernadette Mayer’s query “Is elegance opposed to innovation?” (What’s Your Idea of a Good Time?) says, elegantly enough: “Pretty iffy.” And:

Can we name a single innovator whose innovations are of value whose work at any point lacks elegance? Well, early Cézanne (before he innovated) and a lot of Williams has no elegance whatever. In music, a lot of raw music is more elegant (country blues or Cajun) than the refined versions of the same material. Innovation being a reaction against dull flatness or vulgarized mechanical “cheap imitation” style is always the revelation of furthered elegance.

What “age” is the present? One of predominant gussying up—heaped up audacities of the unslung vocable, exfoliant empirics gerrymandered up against the presumed “dull flatness” of the empire’s previous experiments, so soon become ready-mades? (Is there exemplary poverty in the overloading of the query itself?) Is what is needed now a flinging off of such obesity of means? I keep returning to Williams’s (Berkson points to Williams’s “raw awkward flatness” with the proviso and rejoinder that “it wasn’t dull”) warning against any penchant to merely “play tiddlywinks with the syllables”:

Experiment we must have, but it seems to me that a number of the younger writers have forgotten that writing doesn’t mean just inventing new ways to say “So’s your Old Man.” I swear I myself can’t make out for the life of me what many of them are talking about, and I have a will to understand them that they will not find in many another.

Williams aged roughly forty-seven (c. 1930) at that salvo. He’s warning against dallyings with freighted substancelessness: “Technique is a part of it—new technique; technique is itself substance, as all artists must know; but it is the substance under that, forming that, giving it its reason for existence which must be the final answer and source of reliance.” Twenty-five or so years later: still the inaccrochable doubt, writing to Louis Zukofsky (1 April 1956): “I firmly believe that with the nutty experimentation due before long to have evaporated from our systems (necessary as it was to break down stodginess) a great dawn in soon to burst above American letters.” See, too, Berkson’s seeming fatigue (c. 1981, in a letter to Mayer) at mere rampant industry repeating the new doxy’s foibles: “I do feel my attentions need to be tricked to a new alert state for, in & then back out of writing . . . Like you once said, the accumulation method is dog-tired (I know you didn’t say dog-tired) & likewise the ‘popcorn / snapdragon’ jabber voice.” Isn’t that fatigue, too, what’s displayed in Berkson’s lines out of the “Gimme a Swig” section of “For Jim Gustafson” (Fugue State)?

There must have been a saturation of enchantment
at some point before the crafty badgers
dismantled their catch, the Actual, for
meathead determinism, pestilence futures, sub-
dular glitches, et alia. You had plenty to read,
a river slipping, sliding gently though it
every day, the first pineapple.

One is, I think long gone beyond what Williams calls—speaking of Marianne Moore’s work—“a swiftness that passes without repugnance from thing to thing.” A sense of “the Actual” beleaguered (in the present “age”) by overdetermining glut, excess harrying the clean fit (“cloud over cloud” or “steel over steel”—the muzziness of the particulars offers no quandary) of percept. Williams : “The goal is to keep a beleaguered line of understanding which has movement from breaking down and becoming a hole into which we sink decoratively to rest.”

(Accounting: the new year’s offertory must needs consider at the outset one’s own likely insolvency of means.)