The Correspondence of William Carlos Williams and Louis Zukofsky 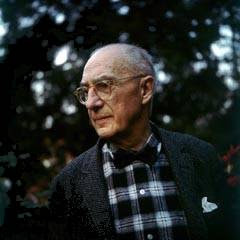 Abjuring hacks and sniffles. Some notes out of The Correspondence of William Carlos Williams and Louis Zukofsky, edited by Barry Ahearn (Wesleyan, 2003). Williams (29 January 1943), regarding the work of the “surrealistus” (here, Alain Bosquet):

He seems wordy, wanders on as I imagine most surrealistus are bound to. If you give yourself over to the unconscious you know as well as I that it’s going to be repetitious . . . Maybe a nugget will be turned up . . . We’re to suppose that the poet is born perfect—if only he can loosen the neck of his bladder and piss it out.

Later, in a 22 December 1944 letter, Williams talks of reading a piece by André Breton, “one of those rarities—something simple coming out of an insensate complexity of method”—making something of an oxymoron attempt to do the dialectical work of defining. It’s a practiced move for Williams. I am thinking of how he works to nail down the shiny mercurial blob of the writerly “fit” (socked-in and stuck like a peg in a hole and sliding off into the vacuum-hatch of its own continual departure, motility’s grease) in the essay, “The Work of Gertrude Stein”:

Either, we have been taught to think, the mind moves in a logical sequence to a definite end which is its goal, or it will embrace movement without goal other than movement itself for an end and hail “transition” only as supreme.
Take your choice, both resorts are an improper description of the mind in fullest play.
If the attention could envision the whole of writing, let us say, at one time, moving over it in swift and accurate pursuit of the modern imperative at the instant when it is most to the fore, something of what actually takes place under an optimum of intelligence could be observed. It is an alertness not to let go of a possibility of movement in our fearful bedazzlement with some concrete and fixed present.

That movement stilled still moving, the present held forth in its hurtling between what’s gone and what’s arriving. It is precisely there where Williams repeatedly locates himself (hence the warnings against ga-ga experimentalism). Think of how, in “The American Background,” he writes, of the early American settlers, how “two divergent forces were steadily at work, one drawing the inhabitants back to the accustomed with its appeals to loyalty and the love of comfort, the other prodding them to face very often the tortures of the damned, working a new way into a doubtful future, calling for faith, courage and carelessness of spirit.” So Williams’s own “inner tension” and “cultural dilemma”—that of the “conflict between present reliance on the prevalent conditions of place and the overriding of an unrelated authority.” So the animus against any sign of “a cut-off and imposed culture from Europe. See Williams’s vexatious and somewhat amusing report (3 February 1943) of a patient, “a ponderous, 65 year old Englishman”:

You’ve got to hand it to them. He actually sacred me—like my father. A big, big fisted, slow speaking, red faced, H dropping Englishman from Birmingham—the town where my father was born. He came in as if the world were really his and he was destined to be tolerant of it, completely sure of himself, a bit out of breath, very polite but one of God’s own chillen. Had been a [guard] on an armored truck that takes money from one bank to another. Absolutely trustworthy, would die on the spot rather than have a penny lost. The ribs of the Empire. [Jesus!] what am I beside that magnificence. All you can do or could do would be to fuck it. I can now understand why Englishmen are buggers by nature, there’s [absolutely] nothing else to do but take out a 3 ft tool and shove it up the man’s ass. It would be like a crown on one’s head to have been connected with so much empire.

Scribbled pre-American imperium: the thing rings differently seventy years of largely immoral post-WWII adventurism along . . . Is Williams’s essential humility what is lacking in the present “age”? (22 December 1944: “It really takes a lifetime not only to do anything worth while but even to find what we want in others—one is so unsure, so tentative because of lack of [opportunity] to observe. And any decent intelligence is humble at core, too humble to want to make [too] brash an assertion in a fluid world. Finally a small amount of positive statement is possible.” Recalling, somewhat, Marianne Moore’s rarely attenuated regard for the occasion: see, say, “The Steeple-Jack”—“it is a privilege to see so / much confusion.”)

Zukofsky (5 April 1941) brooding about the writerly “demarcation between imposition and necessity” seems to preen a little toward the necessitous (pissing): “Sometime after several years—as the other day—I look thru a batch of poems and make some revisions, and then the next day maybe only one or two revisions stand up. Usually the original—if worth keeping—is the final choice. I think that’s true of most work in which a guy is not merely a writer but saying something. . .”

Williams (“[April 1943]”), revising The Wedge (“I cut the book by about twenty three pages and that is final”), obtaining fortitude and grace in chance local conditions: “I had almost to get a fever to do it—in fact I was helped by an article on gardening which said that the victory [gardeners] next year, it is hoped, will profit by their errors next year. That if you plant too much and have not the hardihood to weed out what you cannot use or that you have not the place for, the overabundance of no matter what you have growing is a WEED! Tear it up.”

Zukofsky’s odd aping of Williams (15 April 1960). After Williams suggests he “can’t do it any more”: “And as for stopping to write, I am really waiting for a time when—and that’s not hard to imagine having gone thru what we have—life, and that is the poem, will be no poorer even when poetry is not being written. Because that’s when it’s written and even literally gets written down.” Or, out of an unsent letter regarding “A” dated “Thanksgiving Day 1957”—Zukofsky echoing Williams’s “cleanliness” of technique (think of, say, Williams’s 1925 remarks on Marianne Moore’s pleasure in “wiping soiled words or cutting them clean out, removing the aureoles that have been pasted about them or taking them bodily from greasy contexts”). Zukofsky:

I was moved by your grasp of its poetic means: what I always want to be its means, if I have done well. That is: the clean statement—no matter what one’s personal interests, leanings, refinements, excesses, abstentions, historic subjects, and so on are at any time—that does not impose a lie on the incontrovertible fact that because the statement is clean it compels only thru the construction in its music. In this sense, I do not have to tell you, the poem has no subject but the poem.

Or, replying to Williams’s poem “Mounted as an Amazon”—originally titled “The Swivelhipped Amazon”—

She rides her hips as
it were a horse
such women

tickle me a pat answer
to philosophy
or high heels would

put them on their
cans if fol-
lowed up most women

are more pliant
come of
a far different race

What’s “The Swivel hipped Amazon” a preview from? Do you want it back? Gives both C. & me a good laugh. And, by the way, it’s a good clue to reading Bottom in Black Mtn. Rev.—if you read it as the product of a pliant breed not forcing any thing on one, but presenting, as much as it can, everything around a thing, without, if possible, cluttering: instead of a pat answer to philosophy, to show up how swivelhipped it is. So I proceed in prose as I do in “A”: I show & come back to it, & show something related, & come back to both . . . always (I hope) saying it’s neither the pat answer nor philosophy that makes or sees anything solid-like.

A little stretched, isn’t that, like foisting off into a hardly suspecting or appropriate comment box the besiegement of one’s own momentary obsess? Cough, snort . . .