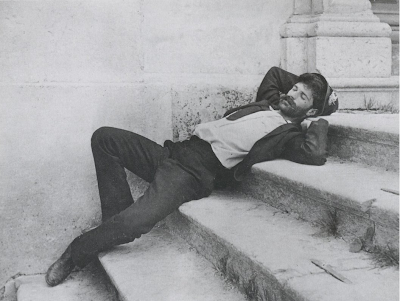 Bloated yellow moon hanging cheekish and low making the pre-dawn sky look green. A car horn’s sudden low chortle, distantly unlocked. Wind-made tremolos all along the viaduct. Tremolos of tremolos. To connect beyond with. “Withness”: a William James-invented word. In 1904, predating imagism’s codified joinery: “This imperfect intimacy, this bare relation of withness between some parts of the sum total of experience and other parts.” And (1907): “The lowest grade of universe would be a world of mere withness.”

Samuel Johnson (Boswell, The Journal of a Tour to the Hebrides): ‘I remember I was once on a visit at the house of a lady for whom I had a high respect. There was a good deal of company in the room. When they were gone, I said to this lady, “What foolish talking have we had!” “Yes,” said she, “but while they talked, you said nothing.” I was struck with reproof. How much better is the man who does nothing. Besides, I love anecdotes. I fancy mankind may come, in time, to write all aphoristically, except in narrative; grow weary of preparation, and connection, and illustration, and all those arts by which a big book is made. If a man is to wait till he weaves anecdotes into a system, we may be long in getting them, and get but a few, in comparison of what we might get.’ (Partially quoted by Guy Davenport, epigraph for Every Force Evolves a Form.)

Stéphane Mallarmé, out of the Preface to Un Coup de Dés (1897), translated by Henry Winkfield: “The ‘blanks,’ in effect, assume importance and are what is immediately most striking; versification always demanded them as a surrounding silence, so that a lyric poem, or one with a few feet, generally occupies about a third of the leaf on which it is centered: I don’t transgress against this order of things, I merely disperse its elements. The paper intervenes each time an image, of its own accord, ceases or withdraws, accepting the succession of others; and, as it is not a question, as it usually is, of regular sound patterns or verses but rather of prismatic subdivisions of the Idea, at the intent they appear and for the duration of their concurrence in some exact mental setting, the text imposes itself, variably, near or far from the latent guiding thread, for the sake of verisimilitude.”

Henri Michaux, out of “Cannabis Indica” (Light Through Darkness), talking about the hemp-seized phenomenon of proliferating words (“explaining themselves in commentaries and in commentaries of commentaries”) he calls “neotenic thinking”: “Before a thought has fulfilled itself and matured, it gives birth to a new one, and this one, scarcely born, incompletely formed, brings still another into the world, a litter of others which similarly respond to one another by means of unexpected and unseizable references, which I have not so far succeeded in rendering.” (Quoted by Jed Rasula in Modernism and Poetic Inspiration: The Shadow Mouth (2009). Neoteny: “Through the process of neoteny a whole slew of new traits may be introduced very rapidly, thereby increasing the variation available for natural selection.”)

Leo Bersani: “Immediacy is an ontological error; the immediacy of sense perverts the nature of thought. The opposite of such immediacy is not ‘profound’ or non-contingent sense, but rather the moving sense of a thought continuously proposing supplements to the objects abolished by its attention.” (Quoted by Rasula.)

William Carlos Williams (out of the 1939 essay “Federico García Lorca”): “‘I proceed,’ Unamuno says still in the twentieth century, ‘by what they call arbitrary affirmations, without documentation, without proof, outside of modern European logic, disdainful of its methods.” A line likely gleaned out of the final “A Funeral in Madrid” chapter of John Dos Passos’s 1922 travel book, Rosinante to the Road Again): “Not for nothing does Unamuno live in the rust and saffron-colored town of Salamanca in the midst of bare red hills that bulge against an enormous flat sky in which the clouds look like piles of granite, like floating cathedrals, they are so solid, heavy, ominous. A country where barrenness and the sweep of cold wind and the lash of strong wine have made people’s minds ingrow into the hereafter, where the clouds have been tramped by the angry feet of the destroying angel.” Dos Passos quotes Unamuno out of “an essay in one of the volumes published by the Residencia de Estudiantes,” adding, too, Unamuno’s

“. . . I want no other method than that of passion, and when my breast swells with disgust, repugnance, sympathy or disdain, I let the mouth speak the bitterness of the heart, and let the words come as they come.

“We Spaniards are, they say, arbitrary charlatans, who fill up with rhetoric the gaps in logic, who subtilize with more or less ingenuity, but uselessly, who lack the sense of coherence, with scholastic souls, casuists and all that.

“I’ve heard similar things said of Augustine, the great African, soul of fire that spilt itself in leaping waves of rhetoric, twistings of the phrase, antithesis, paradoxes and ingenuities. Saint Augustine was a Gongorine and a conceptualist at the same time, which makes me think that Gongorism and conceptualism are the most natural forms of passion and vehemence.”

The last Dos Passos quote of Unamuno thrust by Williams, too, into the Lorca essay.

Williams (out of the 1947 talk, “An Approach to the Poem”): “To be men today we must emulate the past (we need not exceed it), we must take the elements, the particulars (which exist today as they existed then) and combine them today in a manner similar to the work of the past—but completely different in form—we must make anew! of old particulars.
“And if we cannot do work comparable to theirs, in its differences as in its comprehensiveness, then we cannot say that we, as they were, are alive. Our world is not real to us.
“But imagine what we are if we only copy them! Imagine what we are if we are so bound in our minds that we are obsessed by poetry and make no poems comparable to those of the past. If we cannot invent anew.
“Alfred Stieglitz used to tell an effective story about this. He would say, ‘If there were two doors and over one was written, “This way to see God” and over the other, “This way to hear a lecture about God,” everyone would rush toward the second door—for the implication inherent in entering the first door would be so overwhelming that no one would dare to face them.’

Davenport (“Every Force Evolves a Form”): “An osprey, swooping and crying with a ‘barbaric yawp’ (both words referring to sound, speech that is not Greek and seems to be bar bar over and over, yawp, a word as old as English poetry itself for the strident or hoarse call of a bird) seemed to Walt Whitman to be daimon upbraiding him for the ‘gab and loitering.’”