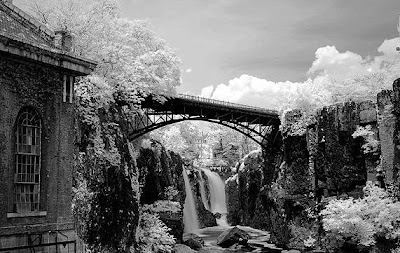 Tired of scratching at the midden-
heap to pull out some ready
bit of usable debris or delectable
chunk of supposed commonality, I chop
green cilantro ‘coarsely’ and throw it
into a pot of canned cannellini
beans and cumin-smeared chicken, ‘expert
in home-cosmography.’ I am surrounded
by books, relics of the incessant
flux of novelty into the world,
useless imperturbables of the sweet constant
juddering . . .

The beginnings of something. Maybe. Riding along a wave of sluggardly dilatoriness and deferral, doing anything but. Reading Paterson

in which a falls unseen
tumbles and rights itself
and refalls—and does not cease, falling
and refalling with a roar, a reverberation
not of the falls but of its rumor
unabated

—“rumor / unabated” being precisely what is found in books, hearsay crudely limned, snatches and forays “at” the world, little anticipatory nothings, din subsumed by itself. (I think of Roman Jakobson’s line in “On Realism and Art” (1921): “verisimilitude in a verbal expression or in a literary description obviously makes no sense whatever.”) Recent tendency to long to shove words—unfixed, petulant words; foot-dragging adherents to “meaning”—its obstinacy and inflexibility; suborned words; loosely clumped and vasty words—aimlessly about against the dull torrent of sense. Paterson:

Texts mount and complicate them-
selves, lead to further texts and those
to synopses, digests and emendations. So be it.
Until the words break loose or—sadly
hold, unshaken. Unshaken! So be it. For
the made-arch holds, the water piles up debris
against it but it is unshaken.

“The 7th December, this year, (1737) at night, was a large shock of an earthquake, accompanied with a remarkable rumbling noise; people waked in their beds, the doors flew open, bricks fell from the chimneys; the consternation was serious, but happily no great damage ensued.”

Or (out of the Marcia Nardi letter): “living (unsafe living, I mean) isn’t something one just sits back and decides about. It happens to one, in a small way, like measles; or in a big way, like a leaking boat or an earthquake . . .” Williams’s sense of the earth: source and rumor-monger, immovable movable ongoing, ceaseless (futile?) chatterer against the “din”:

That at the end of Book One, succeeded only by the late-added note (out of John Addington Symonds’s Studies of the Greek Poets) concerning the “deformed and mutilated verses . . . called Χωλίμβοι or ἴαμβοι σχάζοντεσ (lame or limping iambics)”: “Deformed verse . . . suited to deformed morality.”