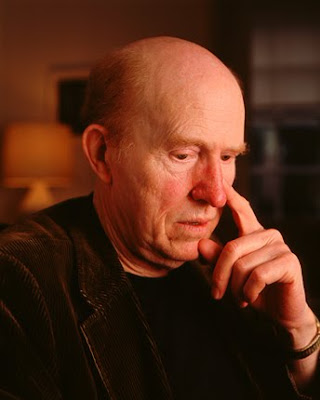 A morning (dog walked under a sketchy Orion, bicycle slicing through the fraudulent blue-blacking of dawn) of juggling several distended anomalies. One is Coleridge’s noticing (in the Biographia) how poetry “reveals itself in the balance or reconciliation of opposite or discordant qualities: of sameness, with difference; of the general, with the concrete; the idea, with the image; the individual, with the representative; the sense of novelty and freshness, with old and familiar objects; a more than usual state of emotion, with more than usual order; judgment, ever awake, and steady self-possession, with enthusiasm and feeling profound or vehement . . .” A. R. Ammons repeats the initial line in the 1967 talk “A Poem Is a Walk.” And, a couple paragraphs prior to quoting it, in the midst of a Cagean opening gambit (“I don’t know whether I can sustain myself for thirty minutes of saying I know nothing—or that I need to try, since I might prove no more than you already suspect, or, even worse, persuade you of the fact . . .”), writes:

Nothingness contains no images to focus and brighten the mind, no contrarieties to build up muscular tension: it has no place for argumentation and persuasion, comparison and contrast, classification, analysis. As nothingness is more perfectly realized, there is increasingly less (if that isn’t contradictory) to realize, less to say, less need to say. Only silence perfects silence. Only nothingness contributes to nothingness.

That “contrarieties . . . build up muscular tension” points to Blake’s proverb out of The Marriage of Heaven and Hell (1790): “Without Contraries is no progression. Attraction and Repulsion, Reason and Energy, Love and Hate, are necessary to Human existence.” Dialectical tension, focus and blur, accretion and wince. A whole rhythm of balances measurably unbalanced. Like walking, its regular consequent fall and catch. (Ammons: “I’m not, of course, interested in walks as such but in clarification or intensification by distraction, seeing one thing better by looking at something else.”) Focus through its lack, the spray off the wave’s curling (disintegrating, foamy) top slapped down into its trough.

William Carlos Williams, in a piece called “Speech Rhythm” (found “uncatalogued among the Viola Baxter Jordan papers” by Mike Weaver and quoted by him in the 1971 William Carlos Williams: The American Background) talks of such: “Each piece of work, rhythmic in whole, is . . . in essence an assembly of tides, waves, ripples—in short, of greater and lesser rhythmic particles regularly repeated or destroyed . . .” And: “The one thing essential to rhythm is not sound but motion, of the two kinds: forward and up and down, rapidity of motion and quality of motion.” A poem is a walk. Weaver points to the rhythmically repeated word “Walking     —” toward the end of the “Sunday in the Park” sequence in Book Two of Paterson:

—roots, for the most part, writhing
upon the surface
(so close are we to ruin every
day!)
searching the punk-dry rot

The body is tilted slightly forward from the basic standing
position and the weight thrown on the ball of the foot,
while the other thigh is lifted and the leg and opposite
arm are swung forward (fig. 6B). Various muscles, aided     .

Weaver locates the lines “The body is tilted . . .” in an article by one Beckett Howorth called “Dynamic Posture” in the 24 August 1946 number of the Journal of the American Medical Association. He quotes pertinent lines therein: “Alternating contraction and relaxation with balanced timing produce rhythm in movement and increase the capacity for sustained action . . .” And: “Correct walking is done with a smooth rhythm, the muscles contracting gently with a brief wavelike action and relaxing in the interval.” And: “The good walker should be able to change pace, stop, start, turn, step up or down, twist or stoop, easily and quickly, without losing balance or rhythm . . .” That recurrent “Walking     —”: six fermata’d notes, sign of a pulse, hold and proceed.

I think, too—thinking of the walk, and writing, and silence—of Kandinsky’s remarks in the 1925 Punkt und Linie zu Fläche (Point and Line to Plane): “The geometric line is an invisible thing. It is the track made by the moving point; that is, its product. It is created by movement—specifically through the destruction of the intense self-contained repose of the point. Here, the leap out of the static to the dynamic occurs.” Walking out of “the intense self-contained repose of the point.” Out of the settled, the assumed, the writ. Ammons (working off Creeley’s “Form is never more than an extension of content”?): “Each poem in becoming generates the laws by which it is generated: extensions of the laws to other poems never completely take.” Somewhere in Paterson (Book Three) Williams writes:

Movement into origin, lalling, a beginning. Ammons again: “A work of art creates a world of both and many, a world of definition and indefinition. Why should we be surprised that the work of art, which over-reaches and reconciles logical paradox, is inaccessible to the methods of logical exposition? A world comes into being about which any statement, however revelatory, is a lessening.”