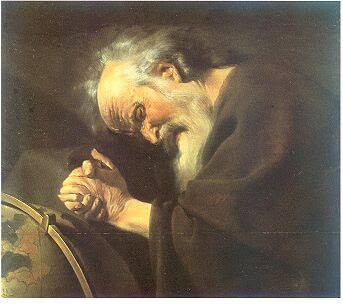 “Dogs, too, bark at what they do not know.” That according to Heraclitus (according to Plutarch). Crows blacking up the tree’s reaches, iniquitous flowers of the damned, refusing to bloom. Tourniquets in the limbs. Cawing foolishly. Making dog noises. (Plutarch assigned to Heraclitus, too, a remark about “the Sibyl with raving mouth” who “utters things mirthless and unadorned and unperfumed,” and whose “voice carries through a thousand years because of the god [who speaks through her].” One commentary reads in part: “just as the Sibyl’s power comes not from herself but from the god, so Heraclitus’ authority is derived not from his own person or opinions but from the cosmic logos in whose name he speaks: “listen not to me but to the logos.” Jack Spicer city. The breakdown: “The point is that words are not something which in themselves are anything but Lowghosts, instead of the Logos. Words are things which just happen to be in your head instead of someone else’s head, just as memories are, various other pieces of furniture in this room that this Martian has to put the clues in . . .”

Kenneth Burke, writing to William Carlos Williams in a letter dated 14 February 1947 (opening, “Dawlink, be my valentine”): “Some years ago, I suffered from a most damnable symptom. When I read certain words, I would ‘hear’ totally different words. I recognized the word as it was, but at the same time I ‘heard’ this other one. And apparently this outlaw word would always be the same. (Though I know I had something here, I was really too frightened to encourage the dislocation by taking notes on it. Rather ‘waste’ it, I thought, and try to kill it, than ‘cultivate’ it, perhaps to my permanent confusion. But I do, in spite of my resolve, remember one such outlawry, such dissociate association: every time, in the newspaper, I read ‘industry,’ along with this word, I heard ‘insanity,’ just as clearly as though it had symptoms of the same sort: I would wake up in the night, for instance with the suddenness of a shot; some word had been spoken, and this word awoke me. And then something would occur which I can best suggest by calling it a zigzag flash of lightning. For of a sudden, spontaneously, I would remember a whole series of ‘connected’ things (things that I had never before thought of as connected, or often things I had not remembered at all, but that seemed ‘connected’ from the standpoint of this ‘key’ word that had awakened me). The zigzag might connect, for instance, something that had happened yesterday, something I had written in a review, something I had said in an argument or as a wisecrack, some hitherto unexplained response to another person, something out of my novel, something out of my childhood, etc. On these, too, I started to take notes; and then I quit because the symptom was increasing—so for months I resolutely refused to take a single note that thus occurred to me spontaneously . . .”

Out of Spicer’s “A Textbook of Poetry” (“It was the first appearance of the Logos that said, ‘The public be damned,’ by which he did not mean that they did not matter or he wanted to be crucified by them, but that really he did not have a word to say to them . . .”):

The poet thinks continually of strategies, of how he can win out against the poem.

Seeking experience for specific instances, drawing upon the pulp of the brain and the legs and the arms and the motion of the poet, making him see things that can be conveyed though their words.

Or disbelief too. Seeking experience for specific instances. And in the gradual lack of the beautiful, the lock of the door before him, a new Eurydice, stepping up to him, punning her way through his hell.

They won’t come through. Nothing comes through. The death

Of every poem in every line