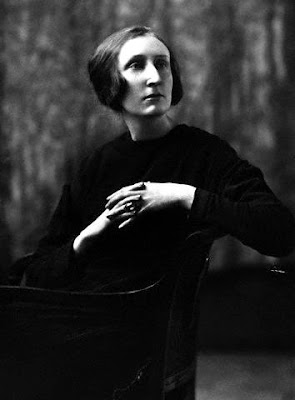 Lately alerted to Ronald Johnson’s “Six, Alas!”—a circa 1990 Chicago Review-published “toast to six women writers, hardly unknown but alike disregarded at present by fashion”—with its deftly considered applaudissements. For Edith Sitwell (“in England I was prepared for many an incomprehension, but the blank wall set up against Edith I always wanted to leap over and set up a ruckus of quotation”), Edna St. Vincent Millay (“No other poet I recall has been so acclaimed then so eclipsed. Within a decade Eliot had made her old hat”), Louise Bogan (Johnson quotes Bogan’s clipped and pertinent verdict regarding “the practice of lyric poetry”: “The chances of getting away with pure fakery within it are very small. One cannot fib—it shows, one cannot manipulate—it spoils. One cannot apply decoration from the outside; or pretend that non-feeling is feeling; or indulge in any of the lower-grade emotions, such as self-pity”), Stevie Smith (“As to technique, she was as unselfconscious as Blake about jarring sense into song. For those who never heard her, the poems can seem ungainly on the page, though when she read aloud they could stick in the ear like Tin Pan Alley”), and Lorine Niedecker (“We admired each other’s poems, though we never met. Shy, she liked it that way, for most attention, other than letters, made her too self-conscious and awkward, she was so unused to it. She’s likened by her readers to Emily Dickinson, not only for this, but for her plain wry dignity with every word.”) The sixth “alas”—Johnson’s opening is a remarkable paean to the way we lose things, alas—some unjustly, others not so—and the need for looking, and selecting:

We all like to believe, as readers, the sands of time might part to show landmark authors, shining a new horizon. It is part of our myth that straw for the bricks of Modernism might be threshed from things like Pound’s exasperation with Sordello, his fascination with Provençal poets’ reiteration of sounds, from Eliot refurbishing Donne for the pantheon, and the unwrapping of fragments of pure Sappho, forgotten, from minor Egyptian mummies. Though every time has its winds—in truth there is not an Ozimandias under every dune.

The sixth “alas” is Elizabeth Bowen, allowing Johnson both to quote the terrific opening to Death of the Heart (“That morning's ice, no more than a brittle film, had cracked and was now floating in segments. These tapped together or, parting, left channels of dark water, down which swans in slow indignation swam”—Johnson’s remark: “Indelible, that “down which swans in slow indignation swam”—a frieze with all the swans’ neck s’s held in rhythm’s sway”—critical sentence-ry mimicking what it addresses) and to defend the capacity of prose, too, to “make the stone stoney” (Shklovsky). Johnson:

Our first read-through of Shakespeare makes any defined border between poetry and prose a quicksand. Later, we might make the distinction that whereas poetry is always visible, like stepping stones on a page, prose is more like water you swim through. First from Flaubert and Joyce, then Henry James, I began to see prose might be also word by word, and phrase after phrase, actually physically enjoyable as poetry, something to read and re-read for itself. And that this might include many before and in between Sir Thomas Browne and Elizabeth Bowen.

One begins to comprehend how Johnson’s own work ranges so effortlessly along genres, visual poetry’s distinct markers to “watery” prose poems. And, noting the humble incisings of Johnson’s criticism, the deft grace of its modesty—oughtn’t “the age” have demanded more of it?

Johnson’s “Six, Alas!” sends me off to the derided (F. R. Leavis apparently opined: “the Sitwells belong to the history of publicity, rather than of poetry”—a remark probably more apt for some of “our” own current Twittering marketeers) Sitwell’s “Some Notes on My Own Poetry”—Johnson calls it “a text to shove alongside Charles Olson’s Projective Verse and Louis Zukofsky’s anthology A Test of Poetry.” A sample:

At the time I began to write, a change in the direction, imagery and rhythms in poetry had become necessary, owing to the rhythmical flaccidity, the verbal deadness, the dead and expected patterns, of some of the poetry immediately preceding us.
Rhythm is one of the principal translators between dream and reality. Rhythm might be described as, to the world of sound, what light is to the world of sight. It shapes and gives new meaning. Rhythm was described by Schopenhauer as melody deprived of its pitch.
The great architect, Monsieur Le Corbusier, said that, as the result of the Machine Age, 'new organs awake in us, another diapason, a new vision.’ He said of persons listening to the sound of certain machinery that ‘the noise was so round that one believed a change in the acoustic functions was taking place.’ It was therefore necessary to find rhythmical expressions for the heightened speed of our time. . . .
There was a great deal of opposition to the revivification of rhythmic patterns. But even the greatest of all rhythmic patterns, those not made by the hand of Man, have been misapprehended. The otherwise great mind of Bishop Burnet, who died in 1715, was so seriously disturbed by the unsymmetrical arrangement of the stars that he rebuked the Creator for His lack of technique. ‘What a beautiful hemisphere they would have made,’ he exclaimed, ‘if they had been placed in rank and order; if they had all been disposed in regular figures . . . all finished and made up into one fair piece, or great composition, according to the rules of art and symmetry.’
We must not complain, therefore, if the patterns in the humble works of Man are not perceived immediately by the unobservant.
Therefore, to rebukes and protests, I returned the answer, ‘God comfort thy capacity,’ and went on my way.