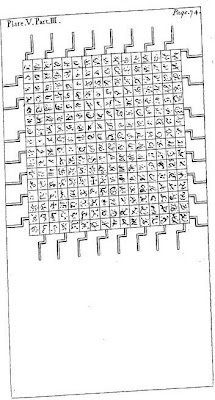 “It was Twenty Foot square, placed in the Middle of the Room.”
(Out of Jonathan Swift’s
Travels into several remote nations of the world. In four parts. By Lemuel Gulliver, first a surgeon, and then a captain of several ships . . ., London, 1726)

To make two bald statements: There’s nothing sentimental about a machine, and: A poem is a small (or large) machine made out of words. When I say there’s nothing sentimental about a poem I mean that there can be no part, as in any other machine, that is redundant.
Prose may carry a load of ill-defined matter like a ship. But poetry is a machine which drives it, pruned to a perfect economy. As in all machines its movement is intrinsic, undulant, a physical more than a literary character.

There’s Williams, too, “An Approach to the Poem” (1947), refining the note: “. . . it is a small (or large) mechanism or engine, as Saintsbury said, composed of words to do a certain job.” And adding, “as a forewarning”:

(Hard to figure exactly what particular, if any, Saintsbury reference Williams is recalling. In a 20 June 1947 letter to Kenneth Burke, prior to attending a writers’ conference in Salt Lake City, Williams reported “reading Saintsbury’s Manual of English Prosody in preparation for bouts with [Allan] Tate who will be also at Utah—so’s not to be caught with my pants too far down on technical matters.” Saintsbury’s usage of “engine” seems mostly to mean “device”: “certainly that powerful and dangerous engine, the pause, comes into play here,” “Pope’s other engine for attaining his effect was phraseology,” &c.)

Machined. That ongoing reverie of some “Contrivance” by means of which “the most ignorant Person . . . with a little bodily Labour, might write Books in Philosophy, Poetry . . . without the least Assistance from Genius or Study . . .” Donc, Jonathan Swift’s writing machine in Gulliver’s Travels:

It was Twenty Foot square, placed in the Middle of the Room. The Superficies was composed of several Bits of Wood, about the Bigness of a Dye, but some larger than others. They were all linked together by slender Wires. These Bits of Wood were covered on every Square with Paper pasted on them, and on these Papers were written all the Words of their Language, in their several Moods, Tenses, and Declensions, but without any Order.

Operated: “Pupils . . . took each of them hold of an Iron Handle, whereof there were Forty fixed round the Edges of the Frame; and giving them a sudden Turn, the whole Disposition of the Words was entirely changed . . . Six and Thirty of the Lads . . . read the several Lines softly as they appeared upon the Frame; and where they found three or four Words together that might make Part of a Sentence, they dictated to the four remaining Boys who were Scribes . . .”

The necessity is to keep one’s different ideas from barging into each other.
In looking at any machine one must sort out the essential parts from the parts that merely happen to be there and which keep an assemblage of machines in more or less fortuitous relation to each other. . . .

Objection to machines has probably disappeared from all, save a few belated crania. No machine ever interfered with a man’s personality or damaged his liberty. Machines were made to eliminate work and produce leisure. Overcrowding, bad placing, bad ventilation of work rooms, all these results of greed and ineradicable human stupidity may have done harm, but can not be blamed on the machine. Machine products have been ugly but even the parochial aesthetic knows by now that this is due to human stupidity and not to machines; the same result has occurred in handwork, painting, music, whenever the worker or artist has gone in for flummydiddle instead of proportion.

Gunk in the gearing. Williams (“An Approach to the Poem”):

When the form has been completed, when it has at last flowered, it begins at once to become sclerotic and has to be broken down once more to the elements—elements, as when English first differed from Latin and Greek, as when Italian grew from Latin and Dante adopted it . . . The elements were new—opening new realms of feeling unknown to the earlier languages.
Everything has to be broken down, not cynically, not without a deep sense of its old dignity, to get at the essential: the formal unit in its purity (that has been tied into now partially meaningless configurations by old languages) . . .