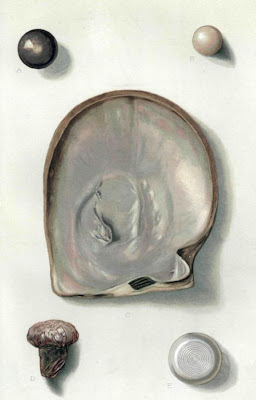 Pearls at her ankles, her monstrous hair
spangled with apple-blossoms is scattered about into
the back country, waking their dreams—where the deer run
and the wood-duck nests protecting his gallant plumage.

In February 1857, David Hower, a poor shoemaker with a large family, out of work and money, collected a lot of mussels from Notch Brook near the City of Paterson. He found in eating them many hard substances. At first he threw them away but at last submitted some of them to a jeweler who gave him twenty-five to thirty dollars for the lot. Later he found others. One pearl of fine lustre was sold to Tiffany for $900 and later to the Empress Eugenie for $2,000 to be known thenceforth as the “Queen Pearl,” the finest of its sort in the world today.
News of this sale created such excitement that search for the pearls was started throughout the country. The Unios (mussels) at Notch Brook and elsewhere were gathered by the millions and destroyed often with little or no result. A large round pearl, weighing 400 grains which would have been the finest pearl of modern times, was ruined by boiling open the shell.

Editor Christopher MacGowan, in notes to the 1992 revised edition, writes of the prose:

No source found. To judge by an article in the Bulletin of the Passaic County Historical Society of November 1956, pp. 38-39, 44, this prose conflates two stories. Jacob and John Quackenbush found and sold to Tiffany what became known as the “Queen Pearl.” The article cites The Paterson Guardian of May 1, 1857. The article goes on to tell the story of “a South Paterson citizen . . . One account names him as a poor shoemaker . . . one David Hower. Another source names him as Daniel Howell, carpenter.” Hower / Howell brought home mussels for dinner, found them tough and fried them, and while subsequently eating them bit into the 400-grain pearl—which had been ruined by “too much cooking. . . . it was, by far, the largest pearl ever found in fresh water mussels.”

Scouting about for sources, one uncovers an essentially verbatim version of Williams’s second paragraph in George Frederick Kunz’s 1890 Gems and Precious Stones of North America. Kunz:

Large and valuable Unio pearls have been obtained in New Jersey. In 1857 a pearl of fine lustre, weighing 93 grains, was found at Notch Brook, near Paterson. It became known as the “Queen Pearl,” and was sold by Tiffany & Co. to the Empress Eugenie of France for $2,500; it is to-day worth four times that amount. (See Colored Plate No. 8.) The news of this sale created such an excitement that search for pearls was started throughout the country. The Unios at Notch Brook and elsewhere were gathered by the millions and destroyed, often with little or no result. A large round pearl, weighing 400 grains, which would doubtless have been the finest pearl of modern times, was ruined by boiling open the shell.

Kunz’s book makes no mention of Hower / Howard. Kunz apparently presented some material out of the chapter (“Pearls”) at the 1893 meeting of the American Fisheries Society in a paper titled “On the Occurrence of Pearls in the United States, and Shall We Legislate to Preserve the Fisheries.” (The lines quoted out of Gems and Precious Stones appear in the annual Transactions of the American Fisheries Society with the added note that the “Queen Pearl” is “finer than any pearl shown at the 1893 World’s Colombian Exposition.”

In ignorance
a certain knowledge and knowledge,
undispersed, its own undoing.

(The multiple seed,
packed tight with detail, soured,
is lost in the flux and the mind,
distracted, floats off in the same
scum)

Rolling up, rolling up heavy with
numbers.

It is the ignorant sun
rising in the slot of
hollow suns risen, so that never in this
world will a man live well in his body
save dying—and not know himself
dying; yet that is
the design. Renews himself
thereby, in addition and subtraction,
walking up and down.

Sun up out of its usual slot. MacGowan quotes, too, cut (in the galleys) lines out of Dahlberg letter that ends the second part of Book I:

I have always abhorred busy people, being too busy to talk, to be able to sit down a few minutes the way the Brahma or the Sacred Cow sits, to put together a letter, which is a way of arranging the pieces of one’s spirit, it is just a hoax, and you ought to know that, and if you don’t you ought to spend some time finding it out, even, if you have to damn me for pointing it out to you.
Frankly, I don’t know what you are saying when you put the past into a frozen theorem, separate and apart from the present. I know of no such past or present; I only know of Nero, of Abraham sitting underneath the terebinth, or Modigliani painting glandular physiognomies, or Socrates prattling in the Symposium, or Sherwood Anderson walking through one of those blighted and noisesome downtown sections, and answering me, as I said to him, ‘Consider with what malice this city must have been conceived.’ ‘Oh, it just happened,’ as of one kind of human continuum. Time to me is an infant’s conception, which Heraclitus so detested. Time is something you mention when you have sick nerves and cannot stand still or sit in quiet either to paint, or smile or talk or listen to somebody else. It’s an occidental fraud, in the main, and there are no people in the world so concerned as the American, who positively has no time, with the clock. It always appeared to me that it was no accident that the glum little Swiss were clock-makers, and that the inhabitants of Königsberg set their watches soon as they saw the apriori Immanuel Kant. The hatred, by the way, of the past, all human lore and poetry, is best illustrated by the modern state which always commemorates and canonizes its own murder-uses by starting a year one for the people. But enough.

A sobering tincture, like so much of Dahlberg. MacGowan reports, too, how, though Dahlberg admired WCW’s In the American Grain, he was no fan of Paterson, writing to Robert McAlmon in 1953: ‘I think his Paterson. . . is a fraud. The man is very spongy, and imagines by repeating the word rock about a hundred and thirty-five times that he can become hard or give the effect of having ophidian intellect.’” A hard judgment to expel, at points, in reading it.
Posted by John Latta at 6:42 AM