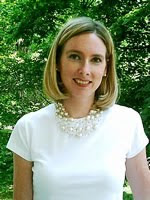 Thumbing through the Sara Crangle-edited Stories and Essays of Mina Loy (Dalkey Archive, 2011), I am struck by the giddy conceptualism of “All the Laughs in One Short Story by McAlmon”:

, and crackled a laugh that came out in sharp hard spurts
of metallic sound.
Yoland laughed harshly disdainful.
And she smiled her glistening
mechanically glamorous smile into his eyes
was laughing her unlubricated
laugh, steadily now – – – –
The jeer and taunt in her weird laugh – – –
She laughed a warmer rusty
chortle now
She smiled sphinxly
, and they shrilly shrieked laughter
– – voice was higher and more abandoned than usual. It shirieked, but rustily mechanical rather than human.
Their jokes could not be heard
because of the laughter,
She gave an inebriated rasp of laughter
– – caused the other girls to shriek their shrill hyena laughter again.
. . .
, and she merely rattled her machine laugh,
again to chortle dry rattling laughter
“I love her laugh.”
Her laugh is cleared of emotions.

A roughly two-page piece (here truncated by about half), put, by Crangle, into the “Essays and Commentary” section of the book. Of it, she writes:

McAlmon wrote many short stories that could be the unnamed focus of “All the laughs,” but in terms of its content, Loy’s piece bears a distinct resemblance to “The Laughing Funeral” of Post-Adolescence. “All the laughs” has a title page in Loy’s hand. Although it appears to start in medias res, this speculation is complicated by Loy’s use of a comma at the outset of the occasional line throughout. The handwritten text is formatted like a prose poem; in spite of the vagaries of Loy’s margins, every attempt has been made to preserve the integrity of her lineation.

“Giddy conceptualism” (that is, a thing designed to amuse and reveal—unlike the ennui-burdened work of the recent brute copyists): I read the piece as a kind of pointed sampling of the McAlmon story. A laughter chart. It’s likely that I am “attuned” to read it thus by my reading of Michelle Disler’s recent book, [Bond, James]: Alphabet, Anatomy, [Auto]biography (Counterpath, 2012). A book that seemingly runs Ian Fleming’s Bond novels through a series of mock-mathematical dismantlings, attempts to “solve” Bond’s overall “linear equation” by listing possible variables, and their values. See something like “Y Solve for Unnamed Variables [Bond, James]”:

Etc. A bruising kind of lark amongst the stripped down particulars. Disler’s “ballparking” allows some likely less-than-fortuitous alignments, that “[89?]” count for “contemplates animal beauty” gets assigned, too, to “loses consciousness.” One at random (for the copyists amongst us). (Disler’s epigraph reads, cheekily, after all: “‘No escape. There was only bluff.’ Ian Fleming.") And then, mid-alphabet, the contextualizing move puts Disler precisely in Bond’s own boots:

“Bond peered through the slits in his mask. Yes, by God! Two of the thugs were standing beside the ticket man watching the throng with deadly concentration. On the far side of the road stood the black Mercedes, petrol vapour curling up from its exhaust. No escape. There was only bluff. Bond put his arm round Tracy’s neck and whispered, ‘Kiss me all the way past the ticket-table. They’re there, but I think we can make it.’
She flung an arm over his shoulder and drew him to her. ‘How did you know that that’s what I've been waiting for?’”

contingent, like acts of mastery, on           beauty, champagne, empty magazine, loaded magazine, rare blood type, her broken nose, killing in cold blood, license to kill, limits to a man’s courage     ON TOP OF     death-cure, voodoo curse, vomiting on the beach, violet hour, velvet dress drawn tightly across the breasts, the saying of unpleasant things     AS WELL AS     shark repellent, sleep of dreams, small curling waves inside the reef on a foreign shore, slight tingling of the scalp, scent in the nose of a clean sea, nightmares, non-essential parts of the body, bamboo shade along the sweltering banks, beach sand littered with bullets     ADDED TO     holiday in the sun, hypocrisy toward her, hot silence, hard sand too warm for sleep, “Why do they hate us so much,” sweeping waves of sleep, “Would you like me in white with pale blue birds flying over me,” phantom memories, manacled wrists, memory of pain, illusion of power, “pair of queens kiss[ing] the green cloth,” her glittering body, her body torn lifeless from the churning sea     OVER AND ABOVE     swirl of movement in dark glass, sass, soft mission, standing transfixed, slight flush at the temples, “the sensual bluntness that breeds mistakes,” too much champagne, too many cold showers, too much blood, a terribly exciting girl, colored glass, gone soft on account of poisoned fruit, gone pale     WITH     clenched teeth, cruel eyes, unnamed curses, gun-sight ground into the coccyx, grated egg with caviar, skeleton grip, imagination above everything else     PLUS     empty window frames, expensive pine-bath essences, questions as easy as possible, the vital purpose of evil, peccadilloes, “privileged to emerge better and more virtuous men”

There is emergent here, one thinks, “after all, a place for the genuine.”