Alan Halsey’s Even if only out of 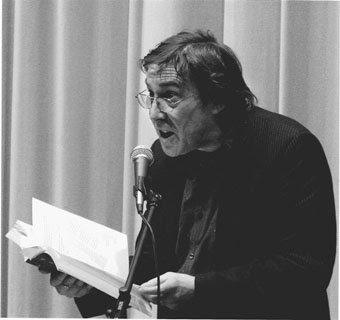 The initial piece—untitled, suddenly there—in Alan Halsey’s Even if only out of (Veer Books, 2011) reads:

Pure relishing of plosives and sibilants severally arrayed. Lip stretches and ear exercises for the goofy heck of it. Somewhere out beyond Gertrude Stein territory, aimless tonguing of a virelangue “without permission.” I think of Ashbery’s remark about O’Hara’s poem called “Poem” that begins “At night Chinamen jump / On Asia with a thump”—how O’Hara, “in the academic atmosphere of the late 1940s” is “amusing himself, another highly suspect activity”—and concede that the current “atmosphere”—caught among the aggressive fatuousness and terminal ironies of flarf’s knowing “humor,” a hybridity all self-consciously a-bristle with the worn-out marks of “experimentalist” doxology, and the determined excesses of Cambridge-sycophancy gibberish (to point to only three areas of earnest) may, it too, warrant the “activity.” Anything for a—O’Hara again—“sign that people do not totally regret life.” Here, in Halsey’s work, a ludic sensibility is combined with a nuanced sense of literary history, an easy-in-its-skin bookishness without idolatry, what Halsey himself calls the work of a “logoclast”—to break the too-serious word, to twit the dogmatic:

A live ideal dead
vade mecum or linger,
singer: disappointment’s
only one of the reasons

to feel discouraged.
‘He wrote against’
that is
he opposed both manner

and matter and expressed
as much in the margin.
Another showed
‘adequate charisma’

but it was after all
October. Just as
limousines to
limestone are but

than Rousseau’d.
Just as also and
without less love
his dearest said

‘Your prodigious
knowledge of
books is
incidental.’

Adherence to the trappings of the bibliographic—or faux-bibliographic. See the wonderful “Mercurialis the Younger: Fragments translated from the ‘Fortunatus’ Codex with an Exegesis” with its scholarly apparatus intact: one sequence of fragments reads:

IV. The most corrupt fragment in this codex. Does it suggest that knowledge of the future would give the present the status of the distant past? M was rarely so philosophic and would have been no admirer of the Four Quartets.
V. The last words have been knifed from the MS. Would anybody censor a phrase such as ‘once loved’? An obscenity seems the likelier provocation. The ‘Black Sea herbs’ and ‘Thessalian hymnbook’ imply that Sibylla hoped to win her wrestler by spells. Perhaps these also required ‘pistachio’ make-up but there is an ambiguity: the complexion is possibly the wrestler’s.
VI. A fragment so obscure it must speak for itself. There are references in the Annales Anticyrae to Posthumus’ Lectures on Plotinus but no text survives.

Against the (presumably) invented works of Mercurialis the Younger, see Halsey’s reworkings of Martial in “Some Versions of Martial.” Gists and piths. Here’s one:

Go, little book.
To read your dirty bits
in Bohn’s edition
London 1860
if they don’t know Latin
the English will teach
themselves Italian.

That expertly parsing what Walter C. A. Ker renders thus:

Would you rather dwell in the shops of the Potters’ Field although, small volume, my bookcase stands empty for you? You don’t know, alas, you don’t know the superciliousness of Mistress Rome; believe me, the crowd of Mars is too clever for you. Nowhere are heard louder sneers; young men and old, even boys, have noses tilted like a rhinoceros. When you have heard a deep “Bravo,” when you are throwing kisses, up you will go, shot heavenward from a jerked blanket. But you, to avoid your master’s constant erasures, and the scoring of your playfulness by his critical pen, are eager, wanton one, to flit through the airs of heaven. Go! fly! yet you might have been safer at home.

Succeeding in shelving the “literary” (along with its “Ho, there!” littérateurs) right up there next to the grocery’s can of corn. (See, too, Halsey’s deft limning of the seventieth epigram of Martial’s Book X: “I’ll tell you why I’ve written so little / this year, Potitus: I spent a whole / day at a literature festival.”) A final Martial, without commentary, too tempting to relent:

Even Bohn translates this one
but in pussyfooting prose. I didn’t say
the gent had his ‘desires aroused’
I said he had his hand in his fly.
The girl was certainly ‘not without emotion’:
her knickers were wet. But Lucretia
did hide my book when Brutus came in
and picked it up again when Brutus went out.

Included, too, amongst much, in Halsey’s Even if only out of: ten additional pieces for the terrific Lives of the Poets. St Robert Southwell, John Aubrey, Charles Sackville, Earl of Dorset, Laetitia Pilkington, Charles Lamb, Thomas Hood, George Meredith (“I may take strange leaps and eyeing the English public / be a Dd. Dd. Dd. difficult Box Hill donkey”), Christina Rossetti, Lewis Carroll and Oscar Wilde. Here’s the one for memoirist Laetitia Pilkington (c. 1709-1750), erstwhile wife of the Church of Ireland priest and poet Matthew Pilkington (Jonathan Swift’s report: “a little young poetical parson, who has a littler young poetical wife”):

Pertinent lines out of Pilkington’s Memoirs:

These Facts are so publickly known, that for the Evidence of them I could produce even a Cloud of Witnesses, were it necessary.
And yet, who that beheld this Man, clad in holy Vesture at the
Altar, appearing like white-robed Innocence, with Eyes up-turned to Heaven, could believe him capable of all Manner of Crimes;

Perjury, Perjury in the highest Degree!
Cruelty, Cruelty in the sternest Degree.

He may, indeed, like Richard III prove himself by these to be a Man; who, when his Mother upbraids him with his manifold Acts of savage Tyranny, she says,

No Beast so fierce, but knows some Touch of Pity.
Rich. But I know none, and therefore am no Beast.

And, indeed Mr. Pilkington may again say with him, that he has nothing

But the plain Devil, and dissembling Looks
To back his Cause.

Oh that Ithuriel’s heav’nly temper’d Spear
Would make the Fiend in his own Shape appear,

Or pluck the holy Furr from off his Back, and let the World, for once see what the Inside of a wicked Priest is made of.

Extraordinary concocting of disparates there, nigh akin to Halsey’s own. Pound’s adage regarding “direct treatment of the ‘thing’ whether subjective or objective” keeps imposing itself in my thinking about Halsey’s work, its carefully appointed assemblings and alignings. Done with humility and empathy for the grand range of human foibles (even those of the overly-ambitious, the earnest, the corrupt) So that another Pound extract comes to importune my reading of Halsey, aptly asserting its “forméd trace”: “nothing matters but the quality / of the affection— / in the end—that has carved the trace in the mind” (Canto LXXVI). Palpable in Even if only out of.