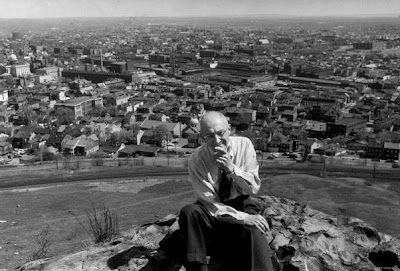 So that offending Nature we immediately offende God, and he that offendeth arte offendeth God touching the hurt or annoyaunce of Nature; but the Vsurer offendeth Nature, for it is not naturall that money should beget or bring forth money without corruption, since Nature willeth that the corruption of one bee the generation of another; and it offendeth God because it doth not exercise the arte according as God commaunded the first man, when he saide, in the sweate of thy face thou shalt eate thy bread; and it is not artificiall that money shoulde bring forth money, as the Vsurers wold have it, which putteth the vse in the thing.

(And I think immediately of the usury of the current conceptualist charlatans, most aptly Kenneth Goldsmith and Vanessa Place, who “putteth” no “vse in the thing”: it is not “artificiall” that text unworked should bring forth text . . .) I am thinking, though, of Williams’s Pound-boxing in Paterson. The lines early in the poem (Book I, 3) wherein Williams makes retort against a Poundian slight (or sally):

P. Your interest is in the bloody loam but what
I’m after is the finished product.

Editor Christopher MacGowan noting: “In a notebook in which he began the notes for his Autobiography WCW records: “Pound’s story of my being interested in the loam whereas he wanted the finished product.” Williams turns Poundian certainty against itself, points to the hazards inherent in “finish”: orthodoxy, arrogance, recklessness, contempt. Rehashing in two lines one reading of Pound’s own trajectory. I read Williams’s “I” as making argument, too, against the eventual “produce” of any literary movement, no matter what idealism accompanied its beginning. (One thinks of Jefferson’s letter of 13 November 1789 to William Stephens Smith wherein he cautions, “God forbid we should ever be 20. years without such a rebellion.” And, earlier, warns against the unfettered insolence of imperial control: “Wonderful is the effect of impudent and persevering lying. The British ministry have so long hired their gazetteers to repeat and model into every form lies about our being in anarchy, that the world has at length believed them, the English nation has believed them, the ministers themselves have come to believe them, and what is more wonderful, we have believed them ourselves.”)

In Paterson (Book Two) Williams turns Pound’s certainty in the “finished product” against itself by rehashing Pound’s litany against usury (Canto LXV) in terms of invention, rather awkwardly mimicking its rhythms:

Without invention nothing is well spaced,
unless the mind change, unless
the stars are new measured, according
to their relative positions, the
line will not change, the necessity
will not matriculate: unless there is
a new mind there cannot be a new
line, the old will go on
repeating itself with recurring
deadliness: without invention
nothing lies under the witch-hazel
bush, the alder does not grow from among
the hummocks margining the all
but spent channel of the old swale,
the small foot-prints
of the mice under the overhanging
tufts of the bunch-grass will not
appear: without invention the line
will never again take on its ancient
divisions when the word, a supple word,
lived in it, crumbled now to chalk.

The “all / but spent” soil where “the alder does not grow” recalling the “bloody loam” of Pound’s taunt. (Williams’s talk of a “new line” making one read Pound’s “with usura the line grows thick / with usura is no clear demarcation” somewhat differently—beyond mere plasticity.) Williams’s rewrite of Pound’s “With Usura” in terms of inventio registers no quarrel with Pound’s damning of usurious practices—see Williams’s interjected excerpts in Paterson of various Social Credit materials:

The Federal Reserve System is a private enterprise . . . a private monopoly . . . (with power) . . . given to it by a spineless Congress . . . to issue and regulate all our money.

They create money from nothing and lend it to private business (the same money over and over again at a high rate of interest), and also to the Government whenever it needs money in war and peace; for which we, the people, representing the Government (in this instance at any rate) must pay interest to the banks in the form of high taxes.

In other words, the Federal Reserve Banks constitute a Legalized National Usury System, whose Customer No. 1 is our Government, the richest country in the world. Every one of us is paying tribute to the money racketeers on every dollar we earn through hard work.

It’s hard not to see Williams’s quarrel with Pound’s glib brusqueries and traveled unerringnesses continued in the subsequent lyric plaint (at the end of Book II, 2):

Why should I move from this place
where I was born? knowing
how futile would be the search
for you in the multiplicity
of your debacle. The world spreads
for me like a flower opening—and
will close for me as might a rose—

wither and fall to the ground
and rot and be drawn up
into a flower again. But you
never wither—but blossom
all about me . . .

Or, in the live portrait of Williams working of a Sunday—

all of a piece, alone
in a wind that does not move the others—
in that way: a way to spend
a Sunday afternoon while the green bush shakes.


.         .       a mass of detail
to interrelate on a new ground, difficultly;
an assonance, a homologue
triple piled
pulling the disparate together to clarify
and compress

That’s Poundian lingo (“clarify / and compress”), unbegrudged, took, and of use to Williams, there indefatigably working the loam, there to “exercise the arte” honestly.