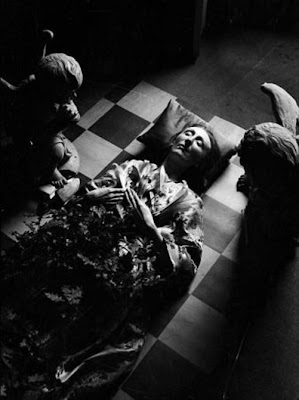 One oughtn’t, apparently, go athwart Dame Edith. If critic F. R. Leavis, in the wake of Sitwell’s 1930 Collected Poems, hinted that “the Sitwells belong to the history of publicity, rather than of poetry,” Sitwell herself seemingly kept up a retaliatory poking at Leavis for the next thirty-odd years. In the 1964 “Preface” to Sitwell’s autobiography Taken Care Of, when she talks of “the depths to which the criticism of poetry has fallen, and the non-nutritive quality of the bun-tough whinings of certain little poetasters,” Sitwell makes certain the harangue occurs in the vicinity of Leavis’s name. More needling in the autobiography’s pages:

It is both instructive and pleasurable to study the works of those living critics whose ears, long as they may be, seem not to have been constructed for the hearing of poetry.
Dr. F. R. Leavis’s pronouncements are a constant pleasure to one. For one thing, he has a transcendental gift, even when he is writing sense, of making it appear to be nonsense. With this, he has a genuine, natural and cultivated gift for wincing—which, from time to time, makes him resemble a ruthless, yet graciously antiseptic young dentist discovering the root of the trouble and explaining it to the patient.

And there’s the question of Leavis’s Milton:

But happiest of all is the moment when we read Dr. Leavis on the subject of Milton, whom he decided to show up in his magazine Scrutiny. He has decided that there is very little of interest to be found in Milton. The sound of a great deal of Milton’s poetry, too, affects Dr. Leavis much as the sound of a motor bicycle affects my less sensitive nervous system. “We find ourselves . . . flinching from the foreseen thud that comes so inevitably, and, at last, irresistibly; for reading Paradise Lost is a matter of resisting, of standing up against the verse-movement, or subduing it into something tolerable like sensitiveness, and in the end our resistance is worn down, we surrender at last to the inexplicable monotony of the ritual.”
This thunderbolt is followed by a lot of the usual wincing and whimpering about “sensitiveness” and by an analysis of the following passage:

The hasty multitude
Admiring enter’d, and the wórk some praise
And some the Architect: his hand was known
In Heav’n by many a Towred structure high,
Where Scéptr’d Angels held their résidence,
And sat as Princes . . .

It is sad to see Milton’s great lines bobbing up and down in the sandy desert of Dr Leavis’s mind with the grace of a fleet of weary camels.

(That line about camels dating back to a 1933 letter to Geoffrey Gorer: “Scrutiny is still affording me some innocent joy. It is all that mincing about which pleases me so much, together with the camel-like bobbing about rhythmically with which Fr. Leavis endows Milton. He makes Milton’s lines move just like a fleet of camels.”) To love, too: the indexical entry for Dr. Leavis found in Sitwell’s Selected Letters (1970):

Odd charging of seeing with auditory heft in Sitwell, as if visibility spoke (sound like “a fleet of camels”). She quotes Bacon’s Naturall History (is it simply the “Beames” that recall Ronald Johnson?):

“The Species of Visibles,” wrote my collateral ancestor Francis Bacon, in his Naturall History, “seem to be Emissions of Beames from the Object seen, almost like Odours, save that they are more Incorporate.”

Sitwell’s comment: “So should be the sound of poetry. And from my earliest age, these Emissions of Beames came to me from all the objects I saw.” And quotes a line out of Chaucer (“Wyf of Bathe”): “Al was this land fulfild of faëry.” As if seeing’d become a matter of capturing auditory emissaries. So, too, when quoting some several echoing lines out of Pope’s “Rape of the Lock”:

Some to the Sun their Insect-Wings unfold,
Waft on the Breeze, or sink in Clouds of gold.
Transparent Forms, too fine for mortal sight,
Their fluid Bodies half dissolv’d in Light.
Loose to the Wind their airy Garments flew,
Thin, glitt’ring Textures of the filmy Dew;
Dipt in the richest Tincture of the Skies,
Where Light disports in ever-mingling Dyes,
While ev’ry Beam new transient Colours flings,
Colours that change whene’er they wave their Wings . . .

Sitwell’s comment would seem to locate all the world’s animating force in sound: “The changes in the movement are caused . . . by an incredibly subtle and ever varying arrangement of alliteration and of vowel-schemes, these latter stretching the line, making it wave in the air, heightening it or letting it sink.” Sitwell, quoting St. Bernard:

“The Word,” wrote St. Bernard (Cantico, Sermon 74), “has sprung in me more than once: if It has entered frequently, I have not always been conscious of Its arrival. But I have felt even the forerunning of Its entry.
“Whence did It enter my soul? Whence did It return on leaving me? What is the place of Its entry? . . . It does not enter through the eyes, for It is not a colour; nor through the ears, for It is not a sound.”

Here Sitwell adds a drily pertinent note: “Here the experience of the saint and the poet differs. The Word, for a poet, does come as a sound. But one from far away.”