Out of the marvelous Lives of the Poets (Five Seasons Press, 2009) by Alan Halsey, “with eighteen by Martin Corless-Smith”:

Whiffs of the life, the style, the “engend’ring poetique,” all wrap’d in the torn muslin cloth of unsettled orthographickal conventions, what a ride! What materiality! Reminders of how language begins with (and is so rarely and “saddilie rememberyt” by) whole clutches of humus-rich dirt, membra disjecta and nary a single polish’d stone shiny falling out of “our” mouths, there in the dawning, letters there for the arranging. Provender in the radical turf of “our awin langage”—a way of continuing the devilishness of Finnegans Wake. Language without slack. Here’s “Sir Thomas Wyatt”:

Sir Thomas with a typewriter. And “quarelles ynowgh in euery mans mowgh”: such language requires the big grainy abrasives of speech (in order to hear it) precisely by calling the eye (“mine Ies”) to examine it so intently. (Or: such language calls to all the senses—that “stynke and close ayer” appendix to the fuddy “englysshe.” Out of that “jeperdie”—“knollege.”) Here’s one of the Corless-Smith “eighteen”:

Everything is dead (poor human) posthumous mask
Swell loudly swelling up to dying proudly
walking hospitals his airy citadels—collapse
(Tom has spit a leetle blood this afternoon)
sleeping in the vale of health—the Battery
a rainless shower [I] begin to fix my eye on an horizon
[The] little mercury I have or sparrow were before
my window Devonshire a mental cottage
golden head upon a thing of clay
a sense of being drowned and rotten like a grain of wheat
there is something real in the world
water parted from the Sea   My Dear Rice, My Dear Brown
Exiled in an awkward bow I have more to say
Blood from my mouth I know the colour of that blood

Why do I suspect [wrongly, it turns out] the book to’ve found its origins in some aimless collaborative romp and amusement, a sketchy reply to Michael Schmidt’s colossal Lives of the Poets? (Or, distantly, Samuel Johnson’s Prefaces, Biographical and Critical, to the Works of the English Poets, commonly call’d ditto.) And then, collaborators “beset upon” by the collaboration itself—the way any good writing, like a high-spirit’d quarterhorse, ’ll up and run off, whim-pretty and unpredictable—turn’d (a little) serious. The poets run a gamut, Chaucer (“toold tales of vanitees and ribaudye / the which pray foryeve me or elles I dye”) to Lionel Johnson (“whose silence has beak and claw”), with seemingly none of the period—five hundred years!—unaccount’d for. So one peruses George Gascoigne (“I neuer receyued one pennie for these Posies / . . . remember to place every worde in his natural sound”), Barnabe Googe (“this Author lothe yet not vnknowen to a greate nombre / in gyuynge lyght to thefe vnpolyshed nombred heapes”), Robert Greene (“conny-catching malcontent with makeshift queane / that could not make verses jet upon the stage”), Ben Jonson (“pinching pediculous mouth-stinker Horace the second”), Margaret Cavendish, Duchess of Newcastle (“twisted each letter to make such toys as I invent myself”), John Dryden (“my Virgil finishd I will write on since I find I can”), Aphra Behn (“as many good Comedies as any Man writ in our Age”), John Wilmot, Earl of Rochester (“the most fantastical odd man alive that slattern Betty was dear to / must have starv’d if I had not pawn’d my plate”), Erasmus Darwin (“I neglected the Muses but study Vowels and consonants and chemistry so eagerly / a little wild garden unexplored / as the poetic ground of Linnaeus incessantly labour’d at”) and William Blake (“at Felpham more distinctly a fairy procession / an immense Poem I am secretary to / and a very unwarrantable warrant for seditious words”). A perfect contagion of quotables. Uno más:

Chestnut     Oak     birch     elm Skin’s up very high in
anything you like sunrises sunsets blood-light and lazuli
ash and gentle fellowship it was a hard thing to undo
forbidden talking sins whips sins and stallion fascination
to give up beauty penitent waiting found the law of oak leaves
verses I resolved [instress] wd. interfere [inscape] with my vocation
the true eye and ace poor chaste and obedient I felt
an instress of Wales and in any inscape of sky or sea thought of Scotus
but never say the poem on the Deutschland is mine
and don’t you (dearest Bridges) say my lines don’t scan
my alleged singularities so harried and gallied up and down
or at standstill go gone at a temporary Junction
no farther inspiration unbidden impulse against my will
some sonnets ready for hanging on the line E V E N   N O W

The book itself is ravishingly design’d in severest blues, blacks and grays. Blue boards and titling. With a dozen or so reprint’d engravings of the poets (out of Portraits of The British Poets publish’d by W. Walker, 1820-1824). 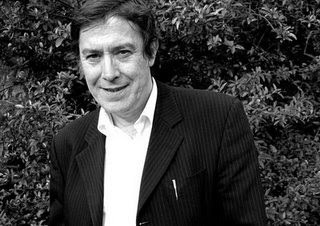 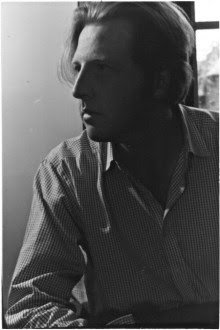 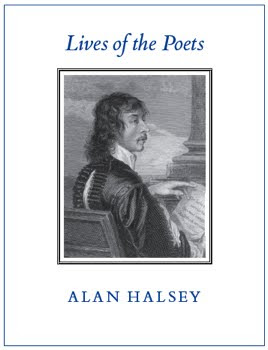 Thomas Carew
(Cover of Lives of the Poets)

CCXXXVIII
Unsung the primal minutiae of the Nekyia, oh down derry derry down,
that unremitting final dowse
Spelunk tiresias jaunt unreport’d. Think of the way the brusque twentieth-
century’s inventing of the aeroplane
Allow’d a reading of the colossal earth-etch’d Nazca lines of southern
Peru, a previous
Geometry unperceiv’d, made by gods or humans mete in grim harmony.
High in the red oak a cicada begins its audacious drilling, keening
for whatever yawn-gaping soul it
Deposit’d in the husk it shed, ungarner’d mestizo, hook-claw’d replica,
green-martyr’d tree-prawn.
Self-sufficiency and finesse is a New World syntax, is align’d with
cruelty meandering, under the white castrato sun.

Bold idylls and cumbersome ruts. Twenty summers of sphinxlike drinking
unutterable, preparedness for the pounce.
I wash the ostentatious violets out of my hair and my soul, little knee-
Hugging manikin of the barstools, nearly throws a chub. It’s that blonde
with the Red Detachment of
Women bangs and the mortal while slice of incisors, ut moveat, ut
dilectat, meticulous as a ditty.
Poor John Luck, the world needs changing and the ordinary gods so
inviolate in a perfecting rout
Doubt it not, walking like enormous white bulls up hind-leggedly, swaggering
like boxers undefeat’d or
Cruelly meandering, punch-drunk under the white castrato sun.