Up out of sleep-sock’d reverie of an Odyssean retour, the semi-slummy precincts of North Plain Street in Ithaca (where Ithaca House perch’d behind the sign of a bicycle-riding frog): the wan yellow Italianate structure now standing tout seul in a blast’d urban mess and tangle, dishevel’d, half-de-timber’d, falling. All the surrounding houses demolish’d, ailanthus and other weed trees partout. (Rhyming with a place—sole upright in a destroy’d zone—I inhabit’d in the fifteenth arrondissement in Paris, home to what we call’d the anarchist’s restaurant, a joint run by a surly Corsican who made one plat and served it to all comers freely, pay what—if—you can.)

Read a little in Davenport’s Pound book, Cities on Hills, and discard’d the remaining hour to Tom McCarthy’s C, that, swerving into coke-snorting spiritualist ya-ya, suddenly seem’d something to get through. Davenport continually wows me with the tangibility—the tang and pungency—of explicatory readings. “Cutting through the muck with clarity”: what Pound himself claim’d to be doing in The Cantos. Davenport, defying supposed obscurity with gentle scrutiny (and little upbraiding, even where a typo’s concern’d):

The New York Times for 18 April 1958, writing about Pound’s career at the time of his release from St Elizabeths hospital in Washington, printed these lines from The Cantos, noting that they are mystifying.

The critic anxious to defend might point out that the passage is misquoted (“plays hob in the tent flaps” is the second line), misarranged typographically, and unfairly removed from its context, as if one were to take Tom o’ Bedlam’s lines from Lear and offer them as evidence of Shakespearean obscurity. Mere literacy tells us that something called Awoi’s hennia is playing hob with tent flaps, something very like a storm wind, and that the verse is imitating this disturbance. But, without further information we must agree with the Times. In context, however, the reader at this point knows the “2, 7” is a count of birds on telegraph wires, and that they are being watched by the poet from a tent in the U. S. Army Disciplinary Training Center outside Pisa, and that the poet sees the birds as notes on a page of music and amuses himself with the tunes they make as they shift on the wires. Already the passage begins to take on an engaging legibility. Birds making their own and visual music is certainly a fresh conceit; one can imagine Campion or Lawes charming an Elizabethan audience with music suggested by birds on a rule of wires. In context the reader has also met “der im Baluba” in its full form—here it is a motif repeating, and a catchphrase only is needed; it is a story about the German anthropologist Frobenius, who among the Baluba people of Africa learned to execute on the tom-tom a ritual beat for making rain. He was allowed to perform this sacred business on a real occasion, and the heavens broke, pouring, A bespectacled German professor, from Frankfurt, beard, pith helmet and all! Now we have a storm, a tent, music written by birds across the sky, and a memory of other rain in a place that seems, by situation, less strange than a detention camp. And Awoi’s hennia is a Japanese ghost, from a Nōh play; so it is a real wind that goes thuuuuuuu but a ghost that says hoooo. The most that can be said for the farfetchedness, as it seems, of Awoi’s hennia is that a sympathetic and interested reader is likely to know Pound’s translation of the play from which it comes, or will enjoy reading it if he looks it up, and that a specific, exotic ghost is more interesting than the unadorned concept of ghosts, and that a spooky rainstorm is more entertaining if you have to sit through one, than unrelieved tedium. Of such curious things are The Cantos made, in quick and close detail.

“Quick and close detail”: that of The Cantos and Davenport’s own (with bravura and dash). “Mere literacy”: what can no longer be assumed. (Earlier in the book, Davenport reproduces part of a letter, John Adams to Thomas Jefferson, wherein Adams is deploring how one Dr. Priestly (in, apparently, a gathering of Greek translations) disregarded the Stoic successory to Zeno, Cleanthes of Assos—“ridiculed by his brother philosophers, and called ‘an ass.’ He owned he was the ass of Zeno, and ‘the only one whose back and shoulders were stout enough to carry his burdens.’” Adams notes how Cleanthes compared “philosophers to instruments of music, which made a noise without understanding it of themselves.” Former Presidents Adams and Jefferson.)

To rhyme with one example of Davenport’s dash (and to implicitly argue for the artistry of reading itself): out of “The Critic as Artist”:

The most notoriously unreadable book in all English literature is Joyce’s Finnegans Wake. Here is a sentence from it:

The horseshow magnete draws the field and don’t the fillyings fly?

Whatever this is, it began life as Stephen Foster’s “Camptown Races.” Like most of the sentences in Finnegans Wake (including the title) it can be sung to a tune from the great fund of childrens’ songs, folksong, or opera which Joyce could count on our knowing. This appeal to common culture is crucial to understanding Joyce. Paradise Lost assumes precisely such a common culture, as do, let us admit, all works of art.
The horseshow magnete is a horseshoe magnet, and we begin to see a poetic joke: a racetrack is shaped like two horseshoes tine to tine (but if you do this with magnets, they repel each other—this is a theme all to itself, not to be pursued here). Having seen the magnet in our sentence, we see that Joyce has in mind the classroom demonstration of magnetic fields (we say “a field of horses” in a race)—iron filings poured onto a sheet of paper will arrange themselves in a pattern that makes the magnetic field visible if we hold the magnet beneath the paper.
Joyce knew that Ezra Pound, his friend and patron, had used this image—“the rose in the steel dust” Pound calls it—to claim that if Dante had known it, he would have found a way, as surely as John Donne, to use it as a valid image in poetry.
Horseshow Magnate is another meaning: a rich buyer of racehorses. And magneto. And the fillyings are fillies, and girls, and they are also feuilles, leaves, for the image of autumn and falling leaves is never far from Joyce’s imagery.
Without its context, which is one of children staging a play for their parents in a nursery, we cannot pursue the full resonances of this sentence. The preceding sentence is “And vamp, vamp, vamp, the girls are merchand.” So the girls who are fleeing the horseshow magnate are camp followers; the setting is our Civil War specifically, and all wars generally, and the battles are full of echoes of Abel and Cain, whose contention has amplified down through history into “the baffle of Whatalose when Adam Leftus and the devil took our hindmost.” 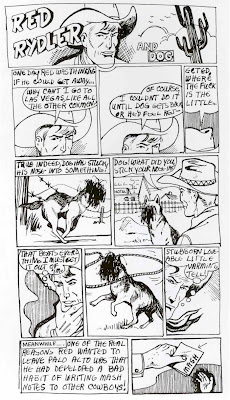 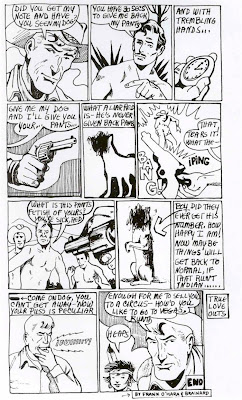