One regret: how the day so indefatigably utters its sentences. (How one is compel’d to jot the sentences down. Somewhere Wallace Stevens complains about always needing to sit with a book, unable to simply sit.) John Ashbery says Fairfield Porter turn’d, in a letter, to a line “quoted out of memory” by Wittgenstein, a sentence central to Porter’s aesthetics: “Every sentence is in order as it is.” Explication de texte (Porter): “Order seems to come from searching for disorder, and awkwardness from searching for harmony or likeness, or the following of a system. The truest order is what you already find there, or that will be given if you don’t try for it. When you arrange, you fail.” And, out of the same letter: “I can’t be distracted from paying the closest possible attention to what I am doing by evaluating it ahead of time. . . . What one pays attention to is what is real (I mean reality calls for one’s attention) and reality is everything. It is not only the best part. It is not an essence. Everything includes the pigment as much as the canvas as much as the subject.” The whole kit and caboodle found unsought for. Kin, surely, to the “naturalness” of “the intangible quality of incidents which are all too concrete and circumstantial” (O’Hara, note the way he slips the halter of essence with that “circumstantial”). O’Hara’s seemingly nonchalant remark (out of “[Statement for The New American Poetry]”—“What is happening to me, allowing for lies and exaggerations which I try to avoid, goes into my poems. I don’t think my experiences are clarified or made beautiful for myself or anyone else; they are just there in whatever form I can find them.” So that: O’Hara joins what Ashbery refers to (speaking of Porter) as “a series of brilliant know-nothings who at intervals have embodied the American genius, from Emerson and Thoreau to Whitman and Dickinson down to Wallace Stevens and Marianne Moore.” Porter dismisses, precisely, “art as sociology”—the artist who “treats art as though it were raw material for a factory that produces a commodity called understanding.” (Or, heaven forfend, career—that hobgoblin of attention-seeking artificers everywhere . . .) Porter: “You can only buck generalities by attention to fact. . . . So aesthetics is what connects one to matters of fact. It is anti-ideal, it is materialist. It implies no approval, but respect for things as they are.” Wittgenstein (Tractatus Logico-Philosophicus):

5.63 I am my world. (The microcosm.)
5.631 There is no such thing as the subject that thinks or entertains ideas. If I wrote a book called The World As I Found It, I should have to include a report on my body, and should have to say which parts where subordinate to my will, and which were not, etc., this being a method of isolating the subject, or rather of showing that in an important sense there is no subject; for it alone could not be mentioned in that book.—
5.632 The subject does not belong to the world: rather, it is a limit of the world.
5.633 Where in the world is a metaphysical subject to be found? You will say that this is exactly like the case of the eye and the visual field. But really you do not see the eye. And nothing in the visual field allows you to infer that it is seen by an eye.
5.6331 For the form of the visual field is surely not like this.

O’Hara’s “in whatever form I can find them” and Wittgenstein’s “book called The World As I Found It,” and Porter’s “attention to fact . . . respect for things as they are.” (As Marianne Moore says: “Expanded explanation tends to spoil the lion’s leap.”) (Fairfield Porter call’d O’Hara’s work “an outpouring in the first person: a prophecy set adrift.” And noted how “O’Hara’s Whitman-like width of awareness dominates a dishevelled wealth of realistic details all somewhat altered by the stamp of the author’s personality.”) Enough jotting. 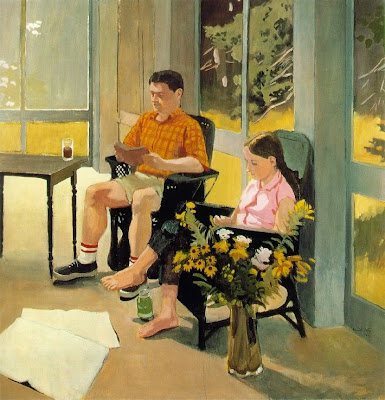 Fairfield Porter, “Iced Coffee,” 1966
(Ashbery: “The show does reveal occasional awkwardnesses, particularly in large figure paintings like “Iced Coffee,” in which the apparent lack of interrelation among the figures gives the whole a somewhat creepy air. But Porter devotees seem to prize these flaws, if such they are, and they have Porter’s authority to do so. What he once wrote of the painter Jane Freilicher is also true of him: ‘When she has to choose between the life of the painting and the rules of construction, she decides to let the rules go.’ Certain irregularities are essential to a picture’s ‘life’: Porter once indignantly refused to remove a chance drip of pigment that bothered the purchaser of a picture, saying that to do so would be tantamount to ‘removing a mole from a beloved’s face.’”) 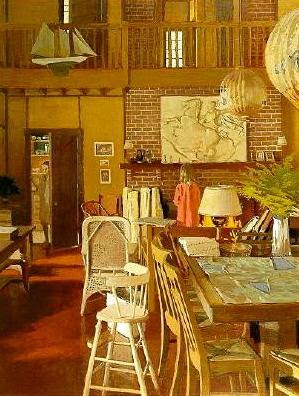 Fairfield Porter, “Interior with a Dress Pattern,” 1969
(Ashbery: “‘Interior with a Dress Pattern” is a technical tour de force that has few parallels in his oeuvre. Here Porter seems to be looking over his shoulder at the pyrotechnics of Velázquez’s “Meninas” and the complex spaces of de Hooch’s Dutch interiors. Yet life goes on as usual in the big living room of the house on Great Spruce Head—one daughter is emerging from the kitchen while another tends the fire in the fireplace; assorted chairs join in games of perspective that no one would ever have noticed if the painter hadn’t been there. The dress pattern of the title is the last thing you see, spread out on a table, a fragile, fluttering reminder of work to be done.”) 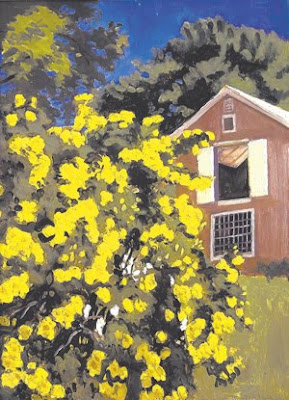 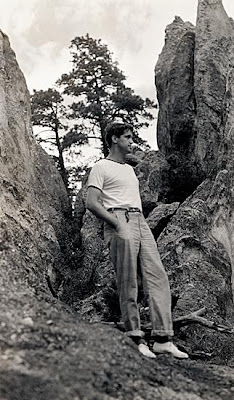