Cold, the moon a hole drill’d in the sky’s western rampart. Crows clump’d up in town trees. Vacancy in the bilge compartment, the pump bust’d. (As George Chambers’d say: “Oh so lo mio, oh do re mi fa so la.”) Ashbery, in a 1966 piece call’d “French Painting, 1820-1870” (Reported Sightings)—how the works of Gustave Courbet (whose influence Ashbery sees in “modern artists as diverse as de Chirico, Balthus and Larry Rivers”) disclose a kind of impatience with realism, desire for “a reexamination and reworking of physical reality”:

In the beautiful “Roe-Deer in Snow” it is as though he continued to paint after he had obtained a satisfactorily realistic image. This “something else” not essential to the picture—whose signs are the crumbly, unrealistic surface of the snow, the clumsy arrangements of boulders and the insistence on the banal fork shape of the central tree—is in fact of great importance, it intrigues and excites us because we cannot tell why it seems right . . . 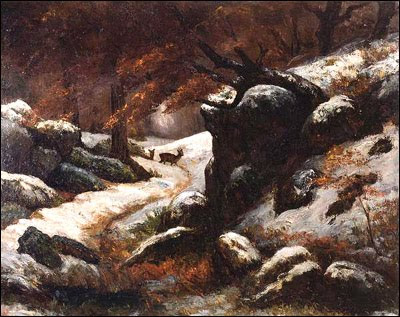 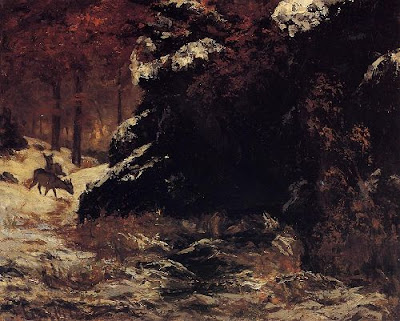 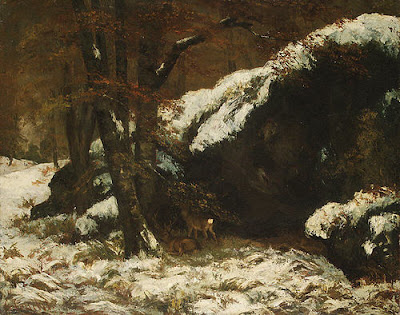 Ashbery calls such add’d manoeuvres “nonfunctional essentials” and points, too, to “Delacroix’s extinguished colors, Daumier’s impasto and the enigmatic relation Millet’s figures have to space and to each other”: “In these details, the artists seem to be reaching toward something beyond the limits of the visual.” Pre-echoes of Derrida’s “supplement,” that trace of a signifier. Ashbery traces the “strain”—partially—back to the “intellectual” (as opposed to “sensual”) exertions of John Constable:

What are the most sublime productions of the pencil but selections of some of the forms of nature, and copies of a few of her evanescent effects; and this is the result, not of inspiration, but of long and patient study, under the direction of much good sense. . . . Painting is a science and should be pursued as an inquiry into the laws of nature. Why, then, may not the landscape be considered as a branch of natural philosophy, of which pictures are but experiments?

Suck of a splendidly recurrent and ferocious riptide (crosscurrent), that of excess (its primal necessity in systems). Think of Joan Retallack (in The Poethical Wager) quoting the William James of “The Will to Believe” out of Benoit Mandelbrot’s The Fractal Geometry of Nature:

The great field for new discoveries . . . is always the unclassified residuum. Round about the accredited and orderly facts of every science there ever floats a sort of dust-cloud of exceptional observations, of occurrences minute and irregular and seldom met with, which it always proves more easy to ignore than to attend to. The ideal of every science is that of a closed and completed system of truth. . . . Phenomena unclassifiable within the system are paradoxical absurdities, and must be held untrue . . . —one neglects or denies them with the best of scientific consciences. . . . Any one will renovate his science who will steadily look after the irregular phenomena. And when the science is renewed, its new formulas often have more of the voice of the exception in them than of what were supposed to be the rules.

“Nonfunctional essentials” un peu partout. Retallack, naturally enough, is talking about Stein. She quotes, too, lines out of Stein’s “Why I Like Detective Stories” (kin to Constable’s “inquiry into the laws of nature”): “I like detecting there are so many things to detect.” And out of Stein’s “An Elucidation”: “I explain wording and painting and sealing and closing. I explain opening and reasoning and rolling, I was just rolling.” Rolling in excess, what Retallack elsewhere calls “the logical excess that is curiosity” (pointing out, too, that curiositas long remain’d a Churchly sin.) I am thinking, too, of the lines of John Ashbery (out of “The Invisible Avant-Garde,” he’s talking about Jackson Pollock—and how, in 1950, when there’s “no sure proof of the existence of the avant-garde,” it “must have often occurred to Pollock that there was just a possibility that he wasn’t an artist at all, that he had spent his life ‘toiling up the wrong road to art’ as Flaubert said of Zola.”) And Ashbery says, famously:

But this very real possibility is paradoxically just what makes the tremendous excitement in his work. It is a gamble against terrific odds. Most reckless things are beautiful in some way, and recklessness is what makes experimental art beautiful, just as religions are beautiful because of the strong possibility that they are founded on nothing. We would all believe in God if we knew he existed, but would this be much fun?

What Ashbery calls the “doubt element” (in Pollock): kin to the inessential “something else” and Stein’s “just rolling”? Is there a split when that excess is trap’d out in irony’s banal garments? (Retallack says: “Irony is always a simultaneous use and disavowal.” Escape hatch to the gamble. She points to Flaubert’s irony in Madame Bovary, how it allows him “to eschew excesses of rhetorical moisture” (lovely, and load’d, phrase) whilst unleashing floods of “romantic fatalism”—the number of less elegant structures copping “today” to similar devices: legion. No stakes risk’d in ironic excess.) The crows flown off, the hard white moon’s slid into the tree-selvaged earth, the capacious earth, to no choir singing, and so one goeth, slipping continually through the zeroes like a mink in the snow: “equal to any, good as any, brave as any, being inextricable from, anonymous with all of them: the beautiful, the splendid and the brave, right up on to the very top itself among the shining phantoms and dream which are the milestone of the long human recording—Helen and the bishop, the kings and the unhomed angels, the scornful and graceless seraphim.” 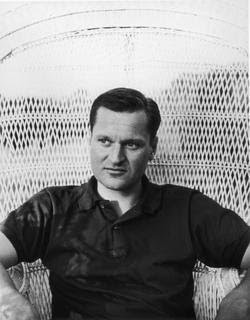