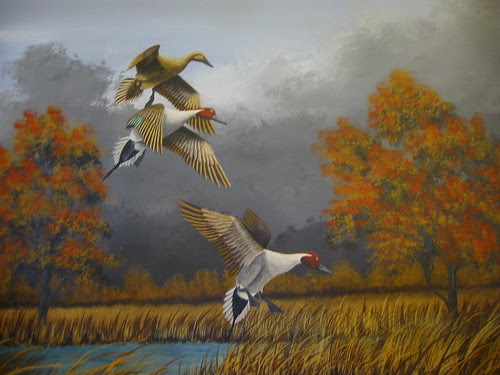 In the usual autumnal Sunday lurch, out of the “habit” of language. Sauf the unpublick’d constant sub-cranial one, its solace of chittering indecipherables. Renewal proceeds by “feeling back along the ancient lines of advance” (Fenollosa). (Michaux’s reverie of shedding the “handcuffs of words,” the lingual imperium forsook, preferring a cruder, gestural signifying presence, “a language without pretense, for those whose knowledge is without pretense.” Speech diminish’d to the indicative this. Julia Kristeva (in Semiotikē, quoted by Richard Sieburth):

Before and behind voice and writing there is anaphora: the gesture that indicates, that institutes relations and eliminates entities. The semiotic system of the Dogon, which in the end seems to be more a scriptural semantic system than a verbal one, is thus based on indication: for them, to learn to speak is to learn to indicate by tracing.

For anaphora (what Puttenham call’d “the Figure of Report,” bang, bang, bang, that regular musketry), see Christopher Smart: “For innumerable ciphers will amount to something. / For the mind of man cannot bear a tedious accumulation of nothings without effect. / For infinite upon infinite they make a chain.” (Guy Davenport: “Poetic knowledge is polythetic: it needs only a representative example to make its case.”) Lost in the way the morning is lost: it is exactly thus that one finds oneself grabbing at a word with something of a wild dog tenacity. See Wallace Stevens in 1934 noting, in Sur Plusieurs Beaux Sujects, the commonplace book he kept sparsely and diligently for roughly twenty years, out of a review in the London Mercury: “Mr Eliot, a critic of Manzanilla siccity of bouquet . . .” In 1943, Stevens writes to Allen Tate (referring to the 1923 “Discourse in a Cantina at Havana”—later, with a certain mean sécheresse, call’d “Academic Discourse at Havana”—translated for a Cuban literary journal): “My rather pulpy poem doesn’t take on a ‘Manzanillan siccity’ merely because it has been translated into Spanish.” And, in 1947, to Paule Vidal, Stevens writes regarding the paintings of Georges Braque: “There is a siccity and an ascetic quality about his color that is very much to my liking. Some of his greens and browns are almost disciplinary. . . . After all, one can be as much ravished by severity as by indulgence.” One refuses to see the drab haeccity in Stevens, opting for the high fescue’d and ydropisical moments—Marianne Moore, with her usual precision, calls it “bravura” (although, with her own usual bravura, Moore next declares how against Stevens’s “general marine volume of statement is set a parachute-spinnaker of verbiage which looms out like half a cantaloupe and gives the body of the theme the air of a fabled argosy advancing”)—when moonlight fubs the girandoles, Scaramouche gets a black barouche, all the continual excess of the sorriest verity kind of thing. There is, too, the Stevens of “Dry Loaf”:

. . . The pines along the river and the dry men blown
Brown as the bread, thinking of birds
Flying from burning countries and brown sand shores,

The ungainly unfoppish line. Reading, in dribbles, through (rather against the habitual poking amongst) Stevens’s letters. That he attend’d Stephen Crane’s funeral:

This morning I went to the funeral of Stephen Crane at the Central Metropolitan Temple on Seventh Avenue near Fourteenth Street. The church is a small one and was about [a] third full. Most of the people were of the lower classes and had dropped in apparently to pass away the time. There was a sprinkling of men and women who looked literary, but they were a wretched, rag, tag, and bob-tail. I recognized John Kendrick Bangs. The whole thing was frightful. The prayers were perfunctory, the choir worse than perfunctory with the exception of its hymn “Nearer My God To Thee” which is the only appropriate hymn for funerals I ever heard. The address was absurd. The man kept me tittering from the time he began till the time he ended. He spoke of Gladstone + Goethe. Then—on the line of premature death—he dragged in Shelley . . .

Odd to think of the twenty-one year old Stevens seeing off Crane, twenty-eight. Is the Stevens of “drab haeccity” partially out of Crane? See, say, Stevens’s “Valley Candle,” isn’t its allegorical heft akin to that of Crane’s pieces out of The Black Riders and Other Lines (1895)::

Or see the conversant manner of each. Stevens’s “Anecdote of Men by the Thousand” beginning “The soul, he said, is composed / Of the external world. // There are men of the East, he said / Who are the East . . .” Compared with Crane’s lines (out of XXVIII in Black Riders):

“Truth,” said a traveller,
“Is a rock, a mighty fortress;
Often have I been to it,
Even to its highest tower,
From whence the world looks black.”

A line that moves hence toward A. R. Ammons’s conversant foibles: “So I said I am Ezra / and the wind whipped my throat / gaming for the sounds of my voice / I listened to the wind / go over my head and up into the night / Turning to the sea I said / I am Ezra . . .” &c.