C. D. Wright’s A Farm Boy (The Song Cave, 2010) begins in a floody morass of Faulknerian particulars, the way history is, mounting up unstoppably, overwhelming the individual:

Who could have told
that the forebears of ernie edward wright would have rumbled
and rutted their way over the mountains of north carolina
and tennessee to plop themselves down in arkansas
in clay county around piggott then haul their modest belongings on up
to the snake-threaded hilly tangle of rock that is the ozarks
to clear enough land to raise a log house
that would by and by burn and then raise another
log and box lumber house this one with two rooms and long level porch
to bring up the five boys of james robert and lu vindie who foresaw
that robert and vindie who had six grades of schooling each
which in those days meant about eighteen months total
would leave the farm in 1926 to try their inexperienced hand
at cotton picking in spiro oklahoma where vindie who was a williams
had some kin that had dribbled over the state line from the ozarks
only to discover they were better at growing and harvesting
big boy tomatoes and loading them onto a wagon to haul
to ciscos cannery to sell for eight dollars a ton
and that robert the father would hate the water in oklahoma
and hate the cotton and hate the brown land it was planted on
and come down with chills and sore joints
and determine to press on to joplin
birthplace of langston hughes
though that didnt mean beans to the wrights and the williams
for robert to work his way through another leg of his poverty
that so resembled the poverty of others
and get himself a job at a plumbing supply outfit and send for
his family to come to joplin by train where my father
ernie edward would attend his first town school
. . .

Sweeping voluble relentlessness somewhat unanchor’d up to the point of “my father”: there, a subtle focusing arrays the surround about a self. Somehow that “snake-threaded hilly tangle of rock” runs throughout, tugs at the individuals even at “town school”: it’s there that Faulkner’s sense of place pulls up, recalling the Yoknapatawphan “thirty or forty or fifty acres of dirt that wouldn’t nobody but our kind work because you’re all our kind have.” Wright’s epigraph (the poem’s “written for the occasion of Ernie E. Wright’s 90th birthday”) is by Oliver Wendell Holmes: “Where we love is home, home that our feet may leave, but not our hearts.” Wright notes, too, that the piece “is based on a taped interview” with Ernie Wright’s son Warren. Thus, a brash and marvelous return (with a vengeance) to speech, done up with no apology, with a slapdash fervor to seize and mimic local rhythms. (So much for the presumed advances of the i hate speech grammatologues.) What one loves: “to work one’s through a leg of poverty” (as if it were a feast of sorts). Whole lives distill’d, tangible in a phrase or two (one reads of “the neighbor boy / raymond fletchers lifetime collection of junk / . . . / christforsaken acres and acres of human junk” and how Wright’s father Ernie, visiting Raymond in order “to scribble a holographic will” ’d have to sit on the tailgate of Raymond’s truck to do it “because the junk inside his trailer rendered it / humanly un-enter-able and impassable and un-sit-down-able-in / and the same goes for the cab of the truck.” Or there’s “old claude fuller who / had a stranglehold on politics in carroll county”—“worth watching” by the young lawyer Ernie “because he made up for want of / a real legal grip with an uncanny sense of tactics.” (What is lacking in so much of “our” poesía norteamericana: (up)rootedness, the human burden.) Central to A Farm Boy: the story of Ernie Wright’s brother Audie who “got through two years of law school / before he was enlisted in the air force / until his plane was shot down over italy / the fine calf leather boot of italy / which took his fine blond body out of the sky.” Wright includes a portion of a letter written by Audie (“march 11 1943”) in North Africa, relating two worlds remarkably resemblant (and pertinent today):

By this time farming should be in a big way and religion getting lax while yelling gee and haw on
the hillsides; so it is with the Arabs in this section. The principal crop in these parts seems to be
wheat and other small grain and believe you me it is getting beautiful now with the rolling plains
getting green with wheat and winter oats. The
Arabs use donkeys and I mean little ones. The jennies back home look like monstrosities
compared to these. They too have camels that they use primarily for freighting purposes. It is
most difficult for me to explain in detail about their customs for as yet I have been unable to
master their language; thus it is hard to learn very much by observation . . .

A Farm Boy is a rouse and laud of sorts for a particular kind of curiosity and determination (Ernie’s said to have “a mind that clicked and sparked with an avidity / to put all the available learning / in his path to work”). In a terrific phrase: “tendon and gristle . . .”

Ben Estes and Alan Felsenthal’s The Song Cave (and quarterly journal, Sea Ranch) is doing remarkable work: “a series of singular things.” Impeccably design’d, consistently of worth. Out of Charles North’s Ode to Asparagus, Peonies and Manet

One gorgeous, almost self-contained still-life occupies the lower right in the mostly black-and-white, stiffly posed Portrait of Théodore Duret (1868): a seemingly gratuitous wood stool at about knee height with a tray on top of it and a book on the floor underneath. The tray holds a glass carafe, a drinking glass with a lemon oddly on top of it, and two utensils whose handles protrude just past the tray’s front edge. The dog-eared book, soft-covered, is a pale minty green sliced diagonally by a shadow; it rests against the front-most leg of the stool. Art history has it that Duret, friend that he was, had given Manet a less than rave review, which led to charged allusions in the painting: the pose referring to a cowardly military man in a Goya painting both Duret and Manet knew, as well as the whole lemon, a traditional symbol of an unfaithful friend (rather than, say, an object whose peel and flesh are there for virtuoso rendering, as in one by Claesz). Myself, I’m grateful the review produced this wonderful, not especially pretty, lemon on its awkward perch. In fact, I love everything about the “embedded” still-life (which was a late addition): the beautifully brushed wine-colored cushion on top of the stool, the barely indicated highlights on the wood, the book flopped on the floor, the light in and on glass, the pitted and pocked lemon which nevertheless irradiates the whole picture. (Manet has a wonderful tiny painting done in 1880 of a single, equally unpretty lemon on a plate, the lemon front and almost center, big enough to be a yellow watermelon or a show pig.)

Other recent titles out of The Song Cave include Geoffrey G. O’Brien’s Hesiod, Jared Stanley’s How the Desert Did Me In, and Macgregor Card’s The Archers. 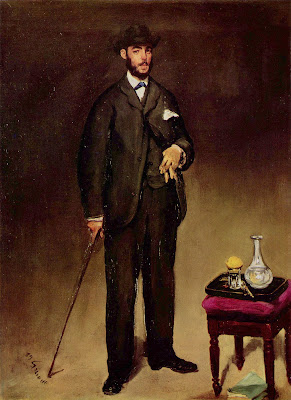 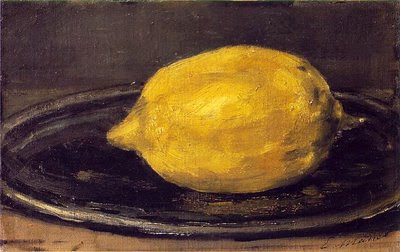