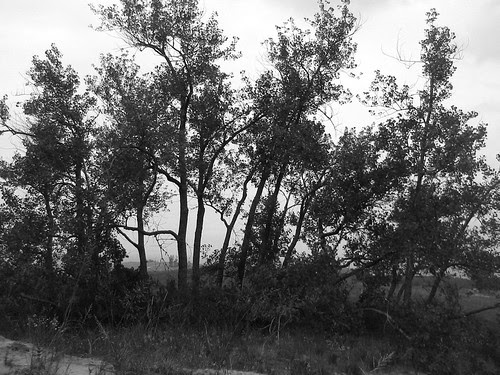 John Ashbery (writing in 1984, out of Reported Sightings), quoting painter Pierre Bonnard, how he attempt’d “to show what one sees when one enters a room all of a sudden.” Ashbery’s version pointing out how, so enter’d, “the eye has an annoying way of zeroing in on unimportant details and ignoring the business of the day”:

So, too, does the mind, and in fact Bonnard was attempting to get beyond the Impressionists’ fidelity to mere appearances (la petite sensation) and to replicate the way phenomena appear to the mind’s eye as well. The paintings do not so much reflect reality as the way reality appears to the memory . . .

(And one thinks of that lovely phrase at the opening of “Self-Portrait in a Convex Mirror”—about the hand “Bigger than the head, thrust at the viewer / And swerving easily away”—“as though to protect / What it advertises.” Selection and denial in that swerve.) Ashbery (after quoting another Bonnard journal entry: “Many little lies to create a great truth”):

. . . it will be necessary for the artist to lie, cheat and steal at every moment in order to keep a firm grasp on the life of the picture, because life itself is protean and slippery. Only after the struggle has ended in a draw can he step back from the canvas and watch the lies fall into place and the emergence of a truth that is more lifelike for having been wrestled so ignobly onto its surface. Paradoxically, this apparent dishonesty is the only honesty that matters in art . . .

Recalling something Trevor Winkfield says to Miles Champion (in a terrific conversation call’d “Why I Am Not a Fauvist” in the recent Poetry Project Newsletter*): “Abstraction was there from the start, of course, only it was known as composition. The arc of the Madonna’s arm had to cradle the infant Jesus just so, otherwise the painting’s entire geometric structure would fly hither and yon—or at least produce awkward shapes, leading the erstwhile viewer to ponder, ‘Why doesn’t this painting work?’ Even if you present yourself as a figurative painter, somewhere inside there’s an abstract artist dying to get out.” Think of how that babe-cradling arm must needs be, say, a foot longer than any human art, “for pictorial reasons.” I am remind’d of O’Hara’s line (in “Hieronymus Bosch”): “It’s just / too very very.” Exorbitance and justice entangling verity itself with a pshaw. Here, again, is where Michaux’s study of China and Chinese painting is pertinent to Ashbery. Michaux (out of the 1972 Émergences-Résurgences, quoted in Richard Sieburth’s Signs in Action: Pound / Michaux):

. . . it is Chinese painting that enters into me in depth, converts me. As soon as I see it, I become a complete adept of the world of signs and lines. Distances preferred to proximities, the poetry of incompletion preferred to eyewitness accounts, to copies. Markings launched into the air, fluttering as if caught by the motion of a sudden inspiration, and not prosaically, laboriously, exhaustively traced . . . this is what spoke to me, what seized me, what carried me away.

Sieburth notes how the painting (and writing) practices Michaux found in China—“at once concrete and abstract, material and immaterial, stable and fluid”—disclose methods “grounded not in mimesis, not in copying, but rather in the art of signification.” Michaux (A Barbarian in Asia):

The Chinese have a talent for reducing being to signified being . . . If a battle is to take place, they do not serve up a battle, they do not simulate it. They signify it. This is the only thing that interests them, the actual battle would strike them as vulgar.

Art resident in the unhesitant artifice of restraint (natural encomia to the way the eye “zeros in” to select). Isn’t that the modality of Ashbery’s work, wherein things—succulent, tangible, startlingly there—emerge out of (seemingly “spoke up out of” with flash and immanence) a wash of imparticulars? And subside (the spokes again) back into it? See, randomly, something like “Crazy Weather” (Houseboat Days, 1977):

It’s this crazy weather we’ve been having:
Falling forward one minute, lying down the next
Among the loose grasses and soft, white, nameless flowers.
People have been making a garment out of it,
Stitching the white of lilacs together with lightning
At some anonymous crossroads. The sky calls
To the deaf earth. The proverbial disarray
Of morning corrects itself as you stand up.
You are wearing a text. The lines
Droop to your shoelaces and I shall never want or need
Any other literature than this poetry of mud
And ambitious reminiscences of times when it came easily
Through the then woods and ploughed fields and had
A simple unconscious dignity we can never hope to
Approximate now except in narrow ravines nobody
Will inspect where some late sample of the rare,
Uninteresting specimen might still be putting out shoots, for all we know.

Out of the phenomenal smear (of the poem itself, its intangible verbiage (“proverbial dissarray”), its “poetry of mud”) pokes (scintillant; blanch’d): “soft, white, nameless flowers”; “white of lilacs” (with the white stitchery of the lightning in the after-image); the droop tendrils of the “shoelaces”; and, the (now undeniably white) “shoots” that the “rare, / Uninteresting specimen” is “putting out” at the end. (White governs the particulars of “Crazy Weather” nearly to the degree of Robert Frost’s “Design,” though without the quaintness, without the sewn-up artifice of Frost’s piece, nor its epiphenomenal nod to something bigger.) (Though there is that “crazy weather” to blame.) Question: is it (Ashbery’s Bonnard, Michaux’s China) all out of Oscar Wilde? In “The Decay of Lying,” complaining about “the noisy assertions of realism,” in particular, plays that are “taken directly from life and reproduce its vulgarity down to the smallest detail”:

. . . they present the gait, manner, costume and accent of real people; they would pass unnoticed in a third-class railway carriage. And yet how wearisome the plays are! They do not succeed in producing even that impression of reality at which they aim, and which is their only reason for existing. As a method, realism is a complete failure.

And: “The whole history of these arts in Europe is the record of the struggle between Orientalism, with its frank rejection of imitation, its love of artistic convention, its dislike to the actual representation of any object in Nature, and our own imitative spirit.”

* Another copious morsel of the Champion / Winkfield conversation is found in a recent issue of PN Review, wherein, around talk of one “Anthony Earnshaw, Leeds’ very own home-grown Surrealist” leads Champion to inquire: “Didn’t Earnshaw have a sailor friend who kept a collection of famous passengers’ turds under glass in the engine room of the ship that he worked on?” To which Winkfield answers, pertly (and perfectly): “Oh yes, the naval Piero Manzoni . . .” 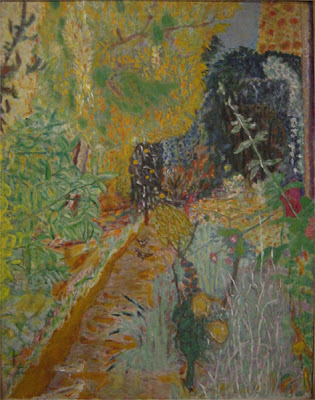 Pierre Bonnard, “Le Jardin,” 1936
(Ashbery: “He is close to Abstract Expressionism in a picture like ‘The Garden’ (1936), inspired by the garden at his house in Le Cannet on the French Riviera. The perspective lines of a path and a hedge are now all but vertical and wobbling violently, resulting in a mass of sopping color that comes and goes like a mirage—what would now be described as ‘all-over’ painting.”) 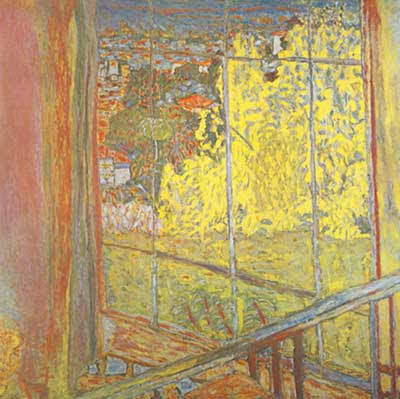 Pierre Bonnard, “l’Atelier au mimosa,” 1939
(Ashbery: “In ‘The Studio and Mimosa, Le Cannet’ the flaming wall of mimosa advances on the fragile window mullions like Birnam Wood marching on Dunsinane; barely visible in the lower left0hand corner is the ectoplasmic face of a woman, a negligible presence next to the cataract of light from outside.”)