Isn’t it a kind of idiot’s work, the daily piecemeal arranging of texts? One breathes shallowly, mouth agape, neurons barely firing. Here’s something. And here. And the painstaking obliviousness begins. Tweezing grains of pollen out of one flower into another. On the way to making a purely white marigold. Enrique Vila-Matas (Bartleby & Co.), a “tracker of Bartlebys”:

In his day, on the occasion of Rimbaud’s centenary, Julien Gracq protested about the pages and pages given over to mythologising the poet’s silence. Gracq pointed out that previously the vow of silence was tolerated or ignored; he pointed out that it was quite common for the courtier, the man of faith or the artist to abandon the century in order to die silently in a monastery or country home.
. . . I am the first to demythologise the misguided saintliness so often attributed to Rimbaud. I cannot forget that he who wrote “above all to smoke, to drink strong liquor like molten metal” (a very beautiful poetic stance) was the same mean creature who wrote from Ethiopia: “I only drink water, fifteen francs a month, everything is very expensive. I never smoke.”

The wilder the child the stuffier the grown-up. The perennially overlook’d Gracq pins a rather different sort of myth—that of the helplessly monstrous—to Céline, “a man who started marching behind his own bugle”:

I get the sense that his exceptional gifts as a vociferator, which he was unable to resist, led him inflexibly toward themes with a high-risk content, the panicky, besieged, frenetic themes, among which anti-Semitism, specifically, made to draw him in. The drama that the demands of an instrument received as a gift can bring out in an artist—demands that are at times half monstrous and above all fully used—must have come into play here in all its scope. If someone, to his misfortune, has received the rat catcher’s flute as a gift, it will be hard to prevent him from taking children to the river.

(Out of Gracq’s splendid Reading Writing.) Oddly enough, the reverse touts some mean credence, too: isn’t it the “the panicky, besieged, frenetic themes” that call out so ‘plosive and Syreneall’ to the beastly many, the unsong’d and unable? The jack-happy dilettantes, the “dedicated followers” of Dickinson’s plaintive taunt—to T. W. Higginson—“I thought that being a Poem one’s self precluded the writing of Poems,” never to “perceive the Mistake.” Gracq is talking about O’Hara’s “divine trap” (“A Young Poet”), that “beautiful style, / the meaning of which draws him further down / into passion / and up in the staring regard of his intuitions”: “the insight which comes as a kiss / and follows as a curse.”

Period of rummaging in the spellbinding abyss of the new Ralph Maud-edit’d Muthologos: Lectures and Interviews (Talonbooks, 2010). Out of a conversation with Herb Kenny, newspaperman (Boston Globe) and author of Cape Ann: Cape America:

olson: Like Eliot did say in that beautiful poem called “Cape Ann”: “Leave it to the gulls.”* [laughs]

kenny: “Leave it to the gulls.”

olson: I think that really we’re too irregular for Mr Eliot. He had to flee back to England and to royalism, ecclesiasticism, and literature.

kenny: This magnetic field of force which you see running from London back and forth to Cape Ann . . . ?

olson: I wouldn’t call it magnetic. I mean, let’s call it “turbinic.” [laughs] Conturbat me. Turbine in that sense.

kenny: What part would that play in bringing Eliot from Cape Ann back to London?

olson: I think it’s just like a piece of flotsam; he drifted back to the old centers of power because he couldn’t stand the vulgarity of this new strength, strength of society. I think, like William Burroughs, these St Louis men are the decampment of the Middle West. And I think they just—I mean, like, it used to be—and, if I may, then I’m certainly anti-Yankee by now but then, after all, I’ve also known and loved many Yankees. I mean, we have rather a scorn for these Middle West fugitives who approach Boston with candles in their hands. Even us Irish from South Boston feel that this is ours, not St Louis’s.

kenny: Eliot’s Cape Ann to London has nothing to do with John Winthrop’s London to Cape Ann?

olson: Utterly not; as a matter of fact, does not. Mr Winthrop can record experiences of the freshness of the air, or even Reverend Higginson can record the, if it’s not the strawberries, the taste of fresh fruit, fresh air and fresh fruit, as they came to these shores. It’s like the rediscovery of Eden; and Mr Eliot, unfortunately, had ashes in his mouth wherever he went. I say this recognizing of course that, as Mr Burroughs said when Mr Trocchi and Mr Burroughs and I were sitting in Trocchi’s shoot-up room one night in London three years ago, and so, because in some stupid—I was so surprised at Trocchi (he’s a Scot, of Italian descent) making himself a confession or something to me: “What do you think of Eliot?” And I said, “Well, look, Trocchi, that’s like asking me do you like string beans as well as peas?” And Burroughs said, “In other words, you are saying he’s a poet?” I said, “For sure,” you know, sort of like, I mean, he really was, he was a poet, there’s no question about it. But then we fight, don’t we? ’cos we have to.

kenny: But you don’t acknowledge that that experience . . . ?

olson: No, on the contrary, I do think, I do think I’m coming, I come of the same turf. I mean, my uncle (Dr Williams is who I’m thinking is my uncle)—I mean, there is that great factum of choice between whether you stay on this shore where the migration came to or whether you backtrack. We really have a lot of scorn for those who can’t take it here. I mean, god knows, none of us who stayed here (and it gets increasingly worse) think that it’s anything but unbearable. But then, mind, we certainly come on, and we stayed here.

kenny: Got to stay here—fight it out.

Recording stops: “[gap].” And resumes. August 1969. “Mr Eliot” (and Old World moribundity)—oddly enough—still the colossus and butt of hostility WCW’d made of him. Olson taking up the cudgel (the way, say, Ron Silliman continues to do today). Forty years along, with the criminal extent of the wholesale bungling of that “freshness” noticeable partout, talk of the strengths of “vulgarity” seem waggish, arch, if not slightly addle-pate. Vila-Matas: “I have been fortunate, I have dealt with hardly a single writer in person. I know that they are vain, mean, scheming, egocentric, impossible. . . . I am only interested in writers who hide away . . .” “Leave it to the gulls.” Gulls: “Men that would haue all in their owne handes . . . Cormerauntes, gredye gulles; yea, men that would eate vp menne, women, and chyldren . . .” Too, a credulous dupe, a simpleton: “anie such slowe yce-braind beefe-witted gull.”

O quick quick quick, quick hear the song sparrow,
Swamp sparrow, fox-sparrow, vesper sparrow
At dawn and dusk. Follow the dance
Of goldenfinch at noon. Leave to chance
The Blackburnian warbler, the shy one. Hail
With shrill whistle the note of the quail, the bob-white
Dodging the bay-bush. Follow the feet
Of the walker, the water-thrush. Follow the flight
Of the dancing arrow, the purple martin. Greet
In silence the bullbat. All are delectable. Sweet sweet sweet
But resign this land at the end, resign it
To its true owner, the tough one, the sea gull.
The palaver is finished.

Lovely enough in a bookish (field guide) sort of way, though ornithologically suspect. 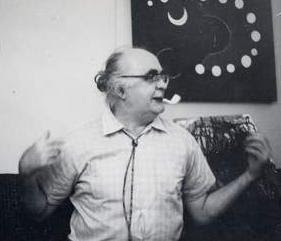