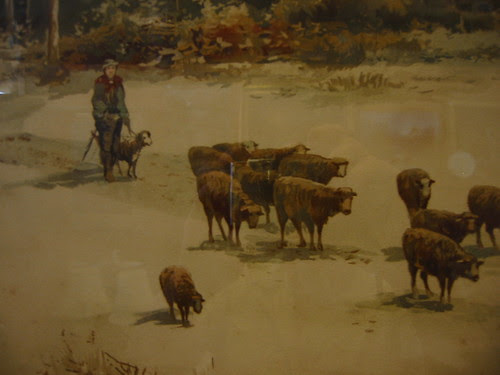 One is indubitably waylaid by the immediate. (One “counsels” such immediacy, would “have” it no other way.) What morning brings it brings like a dog, and dumps it with a slack-jaw’d dog-smile “at” one’s feet. Hugh Kenner’s “omnivorous perspicacity” (Marianne Moore glean’d it out of a quarterly and put it to use). The day sitting right there, undeniably demanding its exchange. Thomas Eakins (who, Whitman insist’d, had “no parlour gallantries,” meaning he got right to it without rhetorick’d effuse, its concomitant shilly-shally): “The big artist does not sit down monkey-like and copy a coal scuttle . . . like some Dutch painters have done . . . but he keeps a sharp eye on Nature and steals her tools. He learns what she does with light, the big tool, and then color, then form. . . . The big artists . . . had the greatest confidence in nature, and when they made a unnatural thing they made it as nature would have made it, and thus they are really closer to nature than the coal-scuttle painters ever suspect. In a big picture you can see what o’clock it is, whether morning or afternoon, if it is hot or cold, winter or summer and what kind of people are there and what they are doing and why . . . If a man makes a hot day he makes it like a hot day he once saw or is seeing . . . he combines, never creates, but at the very first combination no man, and least of all himself could ever disentangle the feelings that animated him just then, and refer each one to its right place.” That, to trouble the categories. Isn’t Ashbery (who agreeably notes Eakins’s “combines, never creates” in talk of Fairfield Porter, suggesting one “lesson” of Porter’s painting is that most difficult one: “there are no rules for anything, no ideas in art, just objects and materials that combine, like people, in somewhat mysterious ways . . . that we are left with our spontaneity and that life itself is a series of improvisations during the course of which it is possible to improve on oneself but never to the point where one doesn’t have to improvise”—I love that mock-interchangeability in the vacillating “improve” and “improvise”) dogging that same question of the coal scuttle in something like “Self-Portrait in a Convex Mirror”? (“But your eyes proclaim / That everything is surface. The surface is what’s there / And nothing can exist except what’s there.”) And:

And just as there are no words for the surface, that is,
No words to say what it really is, that it is not
Superficial but a visible core, then there is
No way out of the problem of pathos vs. experience.
You will stay on, restive, serene in
Your gesture which is neither embrace nor warning
But which holds something of both in pure
Affirmation that doesn’t affirm anything.

The way nature itself is “pure / Affirmation that doesn’t affirm anything.” So, Williams, in Spring and All the imagination making it (“anything”) “as nature would have made it” (“big artist” confidence abounding): “Yes, the imagination, drunk with prohibitions, has destroyed and recreated everything afresh in the likeness of that which it was. Now indeed men look about in amazement at each other with a full realization of the meaning of ‘art.’” And:

Now at last that process of miraculous verisimilitude, that great copying which evolution has followed, repeating move for move every move that it made in the past—is approaching the end.
Suddenly it is at an end. the world is new.

The dog fetches up a thing piecemeal out of recent detritus: “Ashbery’s calling—somewhere in The Tennis Court Oath—a wrecking ball a ‘construction ball’”; “O’Hara’s ‘Picasso made me tough and quick, and the world; / just as in a minute plane trees are knocked down / outside my window by a crew of creators’”; Williams (everywhere in Williams is the destroying / concocting force of the imagination: “Clean is he alone / after whom stream / the broken pieces of the city— / flying apart at his approaches”—or the ferociously lovely: “Black winds from the north / enter black hearts. Barred from / seclusion in lilies they strike / to destroy—”) Warning embrasures. And Whitman saying: “Eakins is not a painter, he is a force.”

Late corrigendum (result of skittery memory’s combo with untoward speed): the Schuyler poem beginning “Polly Red Top Thermos is with us” is in Schuyler’s Collected Poems (and in Freely Espousing) under the title “With Frank and George at Lexington.” Too: I capitalized “Char” in the piece thinking it refer’d to René Char, and recalling O’Hara’s tiny sex-sass-fill’d translation (though he sent it to Porter, not Schuyler) of the French poet’s “L’Amour”: “Etre / Le premier venu.” = “To be / The first comer.” Non capisco the “read / in char” of the Collected’s version. Regarding the poem O’Hara wrote up where the “out-crop” stood. Undoubtedly “On a Mountain,” dated 11 April, 1956, subsequently print’d in Poetry (May 1957):

1
Rocks with lichen on,
rattling leaves and rotting snow

I shall live to finish this cigarette
and the turnpike roars up a lesser hill,
gleams the nether pond and the wire towers
on the horizon.

A foot away in the dead sun
a handkerchief lies dirty as the snow.
It’s the one Molly Bloom pulled off her
boyfriend into.

I’m smoking a Picayune
“the worst cigarette,” press lips upon
the handkerchief
and it is warm.


2
If you were with me
a sweet and winning word might be heard
out of me,

the bare trees under and the visible jet planes
the enormous telegraph paths and grassy snow
the pale photographic sky, the tangled air
crackling above heaving marshes into the day

would all be leaves
around the depth of your voice
owning me yours, not naturally so, beyond the barrier.

Here is where I
have come, so high
to find this true and all the sounds
of lovers, and the pleasant cold. 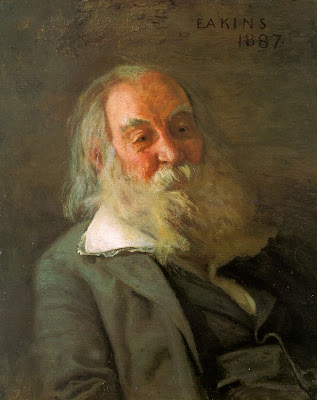