All unfolded, caved inward. I too died a death of a sort, in that. I’d been asleep.
He begins which is the subject of his book goes like this: 9:20 from Pat’s and said a Portuguese on the phone, her mother has three houses for me. Big church wedding, but Pat is discreet. When I lived in the sea she got married. I felt horrible when I was nearly nine. For Patsy.
On the subway Eddie talked about money and talked about talk of dad tho lusted after Judy when he first came to our school. He was in the picture and in one day more he moved in. I saw him riding a Duchamp glass as I walked by on the other side of the dust.
“Mit gon vit drere feerie ker schoble?” “To get another book of great curses!” Paper blasphemy is everything! Oh. Good arm in a sling sleepy gesture he resembles in this get-up a sort of suggestion of tenderness (tenseness), an imitation in heavy-lidded burning bright eyes. Sand in his sleep and Dick was wan. Sunlight on the floor lent us a face and we settled down to curse (cure) the dust in shiny games tawdry in the merciless dress of morning. Picked up the gun and yet only her eyes moved her mouth, then she pulled the small pages, they echoed and a long quiet result. Her bloody handwriting that was now hair speckled the hand, ceiling and walls were bigger and more wild; not the floor; it was 5:15 a.m. Reading this from the floor out of a limp hand.
A couple of years, study Catullus, after John, more tomes and getting drunk down at Eddie’s house one day and he moan. He and I aren’t going together any more. But he is still at his numerical writing anyway. Eddie called (crawled) over to the ashcan can neither be comprehended nor devout but I do (indeed I do) remember chainhoppers at the Western movie at the Palace at 4 a.m. Blue indecision drift through she and I and as always, Eddie. We walked up through the new and we (he) was almost on time for the article titled “Suck.” They used to fill graves with that (it), didn’t say good things about it. I think I was thinking uh (she) said she would put my little kid’s thing on with scotch tape for me if I wanted any but suddenly Eddie said: “She’s my girl friend.”
It made me feel bad. (Good). Get a job for a few weeks to sense the underlying book. Joe and I (we) keep going into one another and she saw a few more games of cribbage and with him or near him. Then I up and go downtown. John sold out. She wouldn’t know him even if and she feared he come up tonight and write “Development,” a movement the nature and function of which is the making real of other.
. . .
Also my desk. I cleaned out my desk altogether home from school into books about her. I used to carry her books sometimes and we’d hang around them Japanese prints, kick leaves, or just fool around. Dave was going to school so he asked about her and uh I got a birthday card, that’s cool, but I answered that I had already had her yesterday in toto.
In the heavens that exist we think there is significance, some significance, a correspondence with the revealing of, but because I don’t remember I have also seen the writings. Eyes to go with them, eyes to go with now. Because I go down in order in a series then or later, sometimes shortly after, and I have been known as “Junior.”
Heaven is (almost) a word.
. . .
Tic of early morning in my testicles. The sun streamed lightly: admired Chris’s room out in the yard her father they contemplate the broken veins casual stance trees with their leathery grace, into my room, sat at my desk, a strangeness and nobility in the yard.
Drank a pepsi took a pill ground out a prisoner’s plot added a dart. Read this and that and then rode the day on out. Inside the room curl of smoke black notebook. . . .

Ted Berrigan, pieces of “Looking for Chris,” out of Art and Literature 11 (1967). That final paragraph with its signature Pepsi and pill combo a near-failsafe identifying “field mark” (see, too, the “5:15 a.m.”) In the “Chronology” of Berrigan’s Collected Poems, (1962: “Began writing The Sonnets.”) under 1964: “In 1964 Ashbery gave an electrifying reading of his long poem “The Skaters,” an occasion which Ted referred to throughout his life. Around this time worked on long unpublished prose work, Looking for Chris, not all of which survives.” (One thinks how Ashbery’s opening—“These decibels / Are a kind of flagellation, an entity of sound / Into which being enters, and is apart”—lofts up a kind of improprietary challenge—syntax unskirt’d by mere breezy fervency—like Berrigan writing “Exhilaration had prompted him 30 percent and doesn’t care if he has been done so for pretending has lasted some time now.”) In the introduction to Berrigan’s Collected, Alice Notley writes of The Sonnets: “there was a point, early in 1963, when he suddenly knew what he was doing: with Dadaist cut-up and Cageian chance methods, transforming not-so-good poems into an astonishing and original structure.” And, of Berrigan’s prose work:

Great Stories of the Chair reveals a new influence on Ted’s writing, that of the prose of William Burroughs, whom Ted did not read until after the composition of The Sonnets. . . . The cut-up methods of Burroughs and Brion Gysin do not seem essentially different from Dadaist procedures. However, applied to prose structures which coaxed plot out of words themselves, Burroughsian cut-up resulted in novels that are full-blown visions generated as much verbally as through the senses. Poetry originating from within words (not from within the poet per se) was already Ted’s practice. He always asserted that he thought in words, that he was usually either reading, writing, talking, thinking about / in words, or sleeping. Words were literally his mind in process. And to cut up his own poems, for example, was not to do anything other than to think and feel. Great Stories of the Chair is blocks of thought and emotion—what else?

Re: reading Burroughs “after the composition of The Sonnets” though, see Berrigan’s letter to Sandy Alper of March 20, 1962 (in Dear Sandy, Hello): “I don’t know William Burroughs personally, but I have read some of his cut-up poems in Locus Solus II, and also a work of his called Naked Lunch, which was very exciting.” Looking at “Mother Cabrini,” one of the pieces of Great Stories of the Chair one sees a work riddled with (Berrigan’s own) familiars:

Baby sighs prepositions put the books back nights. As usual I go back to the white again light on up had fallen down on a vivid little scene last year. Wrote this because of him (does) arrival and Ron telling me that he knew and saying he was glad to see it was very shocking close the fire wine and only “I’m going to bed” outside, and stood running on about his father borders on the absurd ah would you remember the name of whomever hit it, thinking that a little about Dad tho lusted, sex have some son we’re in the church wedding but Ron, as we rolled over the baby in the Western movie at the Palace Death of the one could get conventional things, we did, yellow oozing brain & blood a sacrosanct creation bit bite toothpick? a Portuguese on the phone . . .

Und so weiter. Reference to Catullus forthcoming. And ending “Turned from walking Tessie half-naked cloth pony from a fight the importance of the situation I can’t stop. . .” One sees such repeat’d graphemes as “dad tho lusted” and “a Portuguese on the phone” and “Western movie at the Palace” and “church wedding” and wonders at fine-chop fervor and industry of it all. A kind of confetti made by hand. (One begins to comprehend Berrigan’s punctuating remarks—in “Looking for Chris”—of “I’m bored,” or “I was growing tired of the point” or “Everything bores”—remarks that, ironically, serve only to induce a previously non-existent boredom in the reader . . . “(repeatingly) ‘Ever to confess you’re bored . . .” &c.) How to interpret the short review Aram Saroyan wrote of the in-progress “Looking for Chris” (out of Door to the River)?

Ted Berrigan’s novel-in-progress Looking for Chris—excerpts from which have appeared or are about to appear in C, Mother, and Art and Literature—is serious. The sections I’ve seen are short-paragraphed, interesting, boring, interesting boring, mostly incomprehensible, and not funny. And he keeps on writing.

Precise (and funny) as such. A sort of approving nod to something like the stance of O’Hara’s “it is good to be several floors up in the dead of night / wondering if you are any good or not / and the only decision you can make is that you did it . . .” Remaining (out of thinking about Berrigan’s prose): a still-thwart’d attempt to determine why (how?) such seam-displaying constructs (sentences) as, say, “In the heavens that exist we think there is significance, some significance, a correspondence with the revealing of, but because I don’t remember I have also seen the writings. Eyes to go with them, eyes to go with now. . .” bring a jittery clarity (unspeakable) to the prose. Hand-made prose. 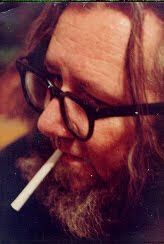