Jean Daive’s Under the Dome: Walks with Paul Celan

CCCIII
W—,
Vive l’imprimerie! Its nul
ptyx outlandishness! Its typos!
Need for a hooplah
to rev the lyric
kine. They moo so.
Or too. Henry James’d
say “indigenous vogues
and literary flurry” and’d
prooffe to bee ryghte:
I am wow’d by
each spec and spectre
of unleash’d orthographic tort.
Gregariousness in the slips,
the lexicographers hiss. Cow’d
by sublimity, they louver
up the jalousie slats,
destriping the chambre austere.
I go about recklessly
hymning the perceptual flux,
the green-tendril’d philodendron’s
slow motility, the un-
mapped plat quiddity of
the bleat’d sonorous Hwaet,
a word I like
for its haecceity, its
its brusque way of
saying “What the heck,”
and beginning to begin.
J—

Read a chunk of Jean Daive’s Rosmarie Waldrop-translated Under the Dome: Walks with Paul Celan, (Burning Deck, 2009). The book is part (Volume 5) of a prose series titled La Condition d’infini Daive wrote and P.O.L. publish’d in the mid-’nineties (other volumes, novels: 6, Americana and 7, Un délinquant impeccable). Sous la coupole is an odd-genre’d thing: neither “biographical / autobiographical document” nor “art” (meaning roman / novel, the label provided other part of La Condition d’infini)—Daive simply calls it a “récit,” an account. Daive examines a friendship—conversations, walks, tensions, silences (the work is punctuated with ellipses—“[ . . .]”—the unsayable, the memoryless)—with the Paul Celan of the late ’sixties, just prior to Celan’s suicide in 1970. Intertext’d: Daive’s “present”—in a spanking white house on the Aegean (“One whole summer long I look at a donkey upright against the sky. The meadow is by the sea, and the donkey stands stockstill in the abundant light.”) Memory’s way of sprouting in the interstices of the present, though that donkey returns in Daive’s narrative with such persistence it becomes a kind of totem, sign of something unspeakable: “The motionless donkey looks out, and I think he looks beyond time at a kind of stupor that suggests sainthood.” Something hallucinatory in the text: its willing wayward gaps and repetitions, its stuttering “jaggedness.”

A glimpse of Celan, he most rarely glimpsed. “Impeccable gray-black suit.” “His ironed handkerchief: white square, perfect square, square without fold.” Though, too:

Walking on the Rue d’Ulm, by the Cinémathèque, he seems to be fighting with himself, hands thrust forward, menacing, convulsive, fingers snapping in the air. Fingers with black nails. Earth underneath.

Or odd fragments of speech:

I go out into the snow, and the sides of beef that redden the butcher shops in Rue Coquillière remind me of this remark Paul made while staring at the pond of the Ecole Normale:
— Autobiography is a goldfish . . .

Or things coming (to Daive) in a tumult:

What is, certes and indubitably, of incalculable use in Under the Dome: the momentary fleeting looks at Celan writing. Evidence of its exactitude and speed (something I’d never picture—such density proclaims a plod). Daive: “The poem he writes in the street and then telephones to her from a public phonebooth.” And (later, after Celan’s death): “Gisèle offers me a page torn from a notebook of Paul’s. It is the page with the poem he gave me for the first issue of fragment. In one stroke, Paul sets down lightning, all the words seized with unheard-of speed.” Or, opposing offices:

Back from London, Paul shows me in his office a postcard of Géricault’s horse struck by lightning: the horse is peaceful, and lightning strikes.
—A poet is one who touches lightning: he knows it can strike two meters off.
—According to you, energy is a structure and develops according to numbers . . . And according to you eternity is a grid, the grid of the human.
—You are lending me a ladder here, Jean Daive . . .

Speed and that neutral gris-de-France:

I’ve come to understand that a silence—is—the negative of a moment of thought and that it needs to be heard attentively. The moments of his identity thus told have echoes of an epic. Everything falls into place: the father, the mother, Judaism, languages, disappearances, the dismembered family regrouped in the camps, then destroyed, the war, poetry. Tours, Paris. Neutral voice, always. Nothing too much.

Reading the composites, the neologisms:

All the words are composites. The second term always the more important. The verb is tied to the second tem. There is a vertical sense.

Paul Celan chews a word like a stone. All day long. It produces word-energy. It all goes into the energy of his composite words. Here we have his biography.

Paul Celan invites the reader to travel inside the word (voyage, labyrinth).

The ranging, the arranging of Celan’s Sprachgitter, the Speech Grid: the world parcel’d out by sound. Daive:

Being incapable of speaking had long made my life impossible when I met Paul Celan, who had written Sprachgitter (1959): a grid, language. Not of words or images, but gathering the world into a grid to elucidate it.

How could a grid contain madness?

How could a grid worry about the locus of a language it seeps in a final emulsion?

I quote endlessly, trying to align what cannot be align’d. Translating’s no-grid. No compression. The smeary (messy) emulsion of any word. I keep thinking how Celan’s body’s found trapped in a “sluice-gate.” Jean Daive:

After her return from the morgue, Gisèle described his corpse to me: “Paul was black. His head was all black.” And I immediately visualized “the Savior’s dark head platted in thorns,” for his presence always had the feel of a person possessed by intense spirituality. This presence of the spiritual determines the poetic emulsion according to the quality of attributes, images, lives, readings, the moment of memory, information, news, the day, in short of all the chance happenings that it generates and sorts out.

Align’d against it, that “black,” that “all black” (Daive): “A word turns like a sun. Mirrored fullness that blinds words.”

*Waldrop’s note: “In 1953, Claire Goll accused Paul Celan of having plagiarized poems by her late husband, Yvan Goll. The charge was groundless.”

***Waldrop’s note: “Daniel Cohn-Bendit: leader of the student protests during May 1968 in France.” 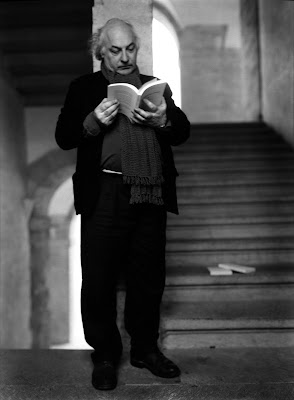