CCLXXXVI
F—,
I read a little
Keats. Note how paper
scarcity and a leaning
to conserve wars with
Keats’s bent toward exfoliant
japery. To Reynolds whilst
“crossing a letter”—he’s longing
to make Wordsworth “play
at leapfrog”— he unleashes
a jubilant pup: “chequer
work leads us naturally
to a Milkmaid, a
Milkmaid to Hogarth, Hogarth
to Shakespeare, Shakespeare to
Hazlitt, Hazlitt to Shakespeare,
and thus by merely
pulling an apron string
we set a pretty
peal of Chimes to
work.” Feedback-heeding “forky
lightning” (and “innocuous thunder”)
running the simple splits
down to the ground.
There’s a lot of
that going around. Nervy
bold nescient prodding of
the presumptuously feral subsumed
by orderly method. The
cold barks the shins
of the broad-leaf’d
and infallible trees perennial,
the dog itself gets
fetch’d home. One of
the two of two
obliges the other one
of two to love
and two makes do.
So Keats, exuberant, dying.
J—

One notes how my enthusiasm makes a frenzy’d bundle bigger, turn’d and misdirect’d: it is what makes my ship snag, “caught / in some moorings. I am always tying up / and then deciding to depart.” I did not read Preserved Smith’s Erasmus into the bird-chirping dawn, though I did pore a sere optick light “at” David Markson’s Springer’s Progress, a pretty good Joycean knock-off, comparable (mostly) to J. P. Donleavy’s similar bent. Amusing in a word-luscious way, and “bawdy.” Shruggish against the obligatory, c’est moi. 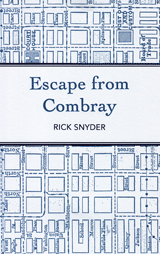 Out of Rick Snyder’s Escape from Combray (Ugly Duckling, 2009):

What dispatched you to eat
eggs at the Indian diner,
to grow jello in petri molds,
to play Simonus Dicit
with a life-size model?
Some agency that licks its
chops before sautéeing them,
another scheme to synch-
ronize the city’s car alarms,
a policeman made of cheese
and leather frosting,
with a gun that’s much
smaller after discharge—
seek an end by refusing
to define it, tell jokes,
stay sober, find mirrors,
hate yourself but refuse
to define it. In doubt
begins responsibility
(whatever that means)
that’s all it is, a means.

Humor and thrift of means (full-tilt breakneck velocity) with a sidelong cheesy snicker at that cop. There’s a terrific sense of alertness here—a Spicerean noting of “what’s coming through.” I recall Rick Snyder’s excellent journal Cello Entry of the early ’aughts. First impeccable number (1999): Hoa Nguyen, John Tipton, Devin Johnston, Joshua Beckman, Catherine Wagner, Michael O’Leary. Too, a little later, Snyder’s translating Catullus (“I am as grateful as the limber girl / was to the golden apple that undid / the tight sash she’d worn so long”). Here’s another:

In Praise of Eros

The muse and executioner
can’t get enough
of each other.
What wonderful lives
they have, cleaving together
to unwind the skeins
of our lives
as far as they can.
Sometimes they pause
to excise a knot of meaning,
and sometimes they skip it
to water the plants
or answer the phone.
Deeply in love,
they often fight
and let the world
continue in its drudgery
of words, chance, and lust.
They are well-versed
in these things
and understand how
they work together.
Neither one resists.
They have been together
so long they simply
let our stories flow,
knowing that just
the sounds of their voices,
the tones and rhythms,
will lead to something
they both want.
Despite the apparent
ease of this foreplay,
their love-making
is more in character,
being swift, decisive,
and beyond appeal.

Which toys with (to catch) the intricacy of Eros, loll and push, the dilatory turn’d of a sudden note to the emphatic. Beyond the insouciant (hardly “work’d”) lyric strains, it’s lovely to see Snyder working—who amongst “us” dares it?—so effortlessly the scorn’d dramatic monologue:

Three days of chicken broth and wine.
It is not the plague that troubles me,
but the quality of the stockfish here,
in Maastricht, where the rain seeps
a stone wall green. I sweat at night
and cannot sleep in this freezing cell.
My stomach is full of eels and fighting.
Oh that I had heeded the Count
and stayed in Bedburg, where the walls
were dry, the sky pure. Five nights
my food held, my candle flickered,
and the words of Paul moved my pen.

Note the way the long e sounds stitch together the midriff, the complaint (Maastricht) to the retrospect (Bedburg)—“seeps,” “green,” “sleep,” “freezing,” “eels,” “heeded.” A sound of ease, though a divergent sound, liable at any moment to slip into a noisome screed. Snyder’s working (I’d wager) off a lovely detail’d letter of Erasmus to one Beatus Rhenanus of Louvain (c. October 15, 1518):

Dear Beatus: Learn the whole tragicomedy of my journey. As you know, I was unwell when I left Basle, having not yet returned into Heaven’s grace since I had so long led a sedentary life under stress of endless labor. The boat trip was not unpleasant except that the noonday sun became trying. At Breisach we lunched worse than you can imagine the smell stifling and the flies worse than the smell. We sat at table half an hour before they brought us anything to eat, and when they did it was only dirty soup, scraps, and salted raw meat, all very nauseous. I did not go into their hencoop, for I had a slight fever. He who tended me told me a fine tale, that the Franciscan theologian with whom I had had a disputation about “haecceities” had pawned some communion vessels as his own! O Scotist subtilty! Toward night we were turned out into a cold village the name of which I was not able to find out, nor, had I done so, should I wish to publish it. There I almost died. In one oven, not large, at almost ten o’clock more than sixty of us dined, such a promiscuous aggregation! As they became heated with wine, what a stink and what a noise! But we all had to sit still until the clock gave the signal to rise.
We were wakened early by the clamor of the sailors. I embarked hungry without having slept. We got to Strassburg before lunch, about nine. There we were better received, especially as Schürer furnished the wine. A part of the literary fellowship was already there and soon all came to greet me, none more affectionately than Gerbel . . .
Thence we struggled on to Spires on horseback, seeing nothing of the cloud of war with which rumor had frightened us. My English horse almost foundered and hardly got to Spires because a rascally blacksmith had so maltreated him by burning the frogs of two of his feet with a hot iron. At Spires I furtively withdrew and betook myself to my neighbor Matermus. The learned and humane dean [Truchses] entertained us kindly for two days. By chance we found Hermann Busch there.
Thence by wagon I went to Worms, thence to Mainz . . . where I stayed not at the inn but at the house of a canon. When we left he took us to the boat. The voyage was, on account of the fair weather, not disagreeable except for its length and the smell of the horses . . . When we came to Boppard and were walking on the shore while the boat was being searched, some one pointed me out to the toll-collector, saying, “That is he.” The collector’s name, if I mistake not, is Christopher Eschenfelder. It is incredible how the man jumped with joy. He took us to his house, where among his receipts we saw the works of Erasmus. He declared that he was happy, called his children, his wife, and all his friends. In the meantime he sent two bottles of wine to the sailors, who begged for it, and when they clamored for more sent them more bottles and promised he would remit the toll to him who had brought so great a man . . .
Having passed through Coblenz and Bonn we arrived at Cologne on Sunday morning before six, in bad weather. Having gone to the inn I ordered the servants to prepare a wagon and have food ready at ten. I heard mass. Lunch was late. The wagon was not forthcoming. I tried to get a horse, for mine were useless. Nothing succeeded. I saw what they were about; they were trying to force us to stay. Immediately I ordered my servants to saddle the horses. I had one box put on a horse, and left another box with my host. Then with my lame horse I pushed on to the castle of the Count of Neuenaar, a journey of about five hours. I spent five days with him at Bedburg in such tranquillity and leisure that I got through with a good part of the revision of the New Testament . . .

Quoted in Preserved Smith’s giant Erasmus: A Study of His Life, Ideals and Place in History (1923). Smith reports how, henceforth:

. . . the trip commences to be a tragedy, Erasmus departs from Bedburg in a terrific storm. The wagon is so rough on the stony road that he prefers even the lame horse. At Aix he is entertained by a canon and makes himself sick by eating disgusting raw fish, so that he is obliged to force himself to vomit by sticking his finger down his throat. Ulcers appear on his thighs and are made worse by riding. When he reaches Tongres he faints, but insists upon being carried on, though in terrible pain, to Louvain. There he is unable to get any physician to attend him, as they all believe he has the plague. Angry with them, he commends himself to Christ, eats nothing but eggs beaten in wine; while recovering, he works doggedly on the New Testament. 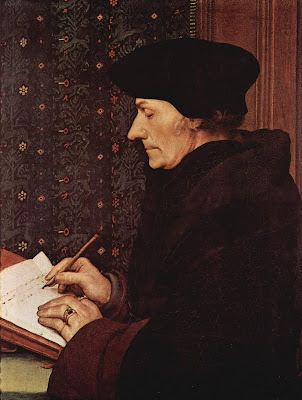