CCCI
U—,
Sense of a dénouement,
my unraveling. Some divergence
of the ecliptic, sunny
yclept’d languor become terror,
all meaning a ruse.
Orange-color’d the rain-
lash’d pine trunks, what’s
access’d by the senses
a tort, a rouse,
all likeness temper’d by
some off-register pitch
un-hummed, hardly exhumed.
Mi fa sol fatso
canvassings of the sinewy
dragon-fires so forkedly
unfolding out of what
sky there is, that
trapezoidal blue splinter paper’d
up, star-tack’d. Empedocles
claim’d the eyes whoop’d
the ears, and threw
himself into Vesuvius’s fiery
siren hole. Mornings make
me literary and tumescent,
flush’d like a grouse
out of the ceaseless
flux, untemper’d, radiant, plow’d.
And so I attend
the barrage of sun-
noises, the massy hurlements
of strife and its
lit particulars, the quill-
satanic shysters of feign’d
chicanery nix’d by song,
its gong’d radical shine
an unquench’d whole. And
I am all ears.
J—

Ah the flatulences of maintaining the daily writing. One sees it un peu partout. Baggage and barrage of goods rifled off the whatever cargo carrier’s handy, that boat with the drooping sails. “Nothing serious can happen here.” Thus, Dr. Johnson: “Almost every poem, consisting of precepts, is so far arbitrary and immethodical, that many of the paragraphs may change places with no apparent inconvenience; for of two or more positions, depending upon some remote and general principle, there is seldom any cogent reason why one should precede the other. But for the order in which they stand, whatever it be, a little ingenuity may easily give a reason. It is possible, says Hooker, that by long circumduction, from any one truth all truth may be inferred. Of all homogeneous truths at least, of all truths respecting the same general end, in whatever series they may be produced, a concatenation by intermediate ideas may be formed, such as, when it is once shewn, shall appear natural; but if this order be reversed, another mode of connection equally specious may be found or made.” Ah, long circumduction, flatulence’s other name. Dr. Johnson’s warning in the succeeding: “As the end of method is perspicuity, that series is sufficiently regular that avoids obscurity; and where there is no obscurity it will not be difficult to discover method.” Method. My method is quotidian disburdening of the brain-pan’s smoky rashers. (The obvious retort is that truth “lies” in the circumductory act itself, the way sex lacks aim, is pure untarget’d frisson. Inexpertly (one’d say, accidentally) the OED manages to hint at such complicity of deeds in quoting Thomas Heywood’s Gynaikeion: or, Nine bookes of various history. Concerninge women inscribed by ye names of ye nine Muses: “One Martha whom Marcius most honourablie circumducted in a horse-litter.”) Oh dear. Scholarly frittering, another kind of circumducting.

Jean Paulhan’s barrage (out of The Flowers of Tarbes, or, Terror in Literature), talking about Rémy de Gourmont, who “studies authors in the same way that an entomologist studies caterpillars,” and writing modes, one that reproaches “ready-made sentences” (Gourmont complaining how “Words fail to arrange themselves into any new positions. They are presented in the same familiar order in which the writer’s memory received them,” thus dragging the same old same old “shamefully resigned thoughts” behind) versus another that fires potshots at the expected defiance and gracelessness of the “literary” (“we are reassured by the awkward aspects rather than the successful ones, and vaguely disappointed if we are not disconcerted”). Barrage:

And who could not in some way feel affected by it when Taine and Renan, for example, condemn half of all writers—but especially classical writers—for their “literary preconceptions.” And then Proust in turn calls Renan—as Faguet does Taine—a “cunning sentence repairman.” Pierre Lasserre writes of Claudel that he “abuses the most material aspects of speech.” Pierre Lièvre says of Morèas: “He called metaphors and noble words to arm themselves.” Paul Valéry likewise says of Stendhal that he “knew how to get around writing sentences per se . . .” Charles Maurras of Victor Hugo: “It’s the words themselves that rise up . . . he is no longer the one writing them.” And Julien Benda, about men of letters in general: “What is particular to them is that they revel in nice-sounding phrases.” Verlaine: “Above all, avoid style.” By which we understand an accomplished style, a style that is just words and phrases. And who wrote the following: “Trying to represent authentic men these days is an exceptional undertaking. Just look at the books that have appeared recently: it’s all just printed words derived from other printed words.”?* But indeed who has not written, or wanted to write this sort of thing? Goethe said: “We read and write so many books that we end up turning into one.”

Fare strage di cuori. To be, if nothing else, language’s caddish heartbreaker, disconcertingly clumsy in the rut. The stinker. 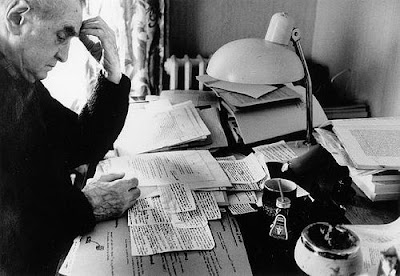