CCLXXXVIII
H—,
Hortense “unfoundedly” is what
pops up, or Humphrey,
some guy’s dog or
cat. Wildly unabash’d trouvailles
of the “lyric sensibility,”
meaning trivial gewgaws interr’d
within a prose matrix.
Druther be hammering “semi-
mechanically” at a breviary
“to a lark’s twitter.”
Finicky is my pencil
grip’d in attendance to
whatever hot contagion “outs.”
It sings my distrust
of praise, heart’s fleece.
Unwieldy and big its
letters, writ unsoundly, unpoliced.
J—

A spell of looking into Pound’s ABC of Reading, mostly for the quoted Arthur Golding Ovid—“And likenesses of ougly beastes with gastful noyses yeld. / For feare whereof         in smokie holes the sisters were compeld / To hide their heads,         one here and there         another for to shun / The glistering light. And while they thus in corners blindly run / Upon their little pretie limmes         a fine crispe filme there goes / And slender finnes         instead of handes         their shortened armes enclose. / But how they lost their former shape         of certaintie to know / The darkness would not suffer them.” More feral transforming and shame. And, browsing, cropping the grasses down to nubs, stray’d into the dichten = condensare purlieu, with its troublesome “That did not mean it was something more wafty and imbecile than prose, but something charged to a higher potential.” All that proscrib’d clarity makes me fuss and fume: “an equal limpidity in poetry, where the perfectly simple verbal order is charged with a much higher potential, an emotional potential.” Somehow I connect that with Pound’s hamstringing analogy (and Aristotle):

You can prove nothing by analogy. The analogy is either range-finding or fumble. Written down as a lurch toward proof, or at worst elaborated in that aim, it leads mainly to useless argument, but a man whose wit teems with analogies will often ‘twig’ that something is wrong long before he knows why.

Aristotle had something of this sort in mind when he wrote ‘apt use of metaphor indicating a swift perception of relations’.

A dozen rough analogies may flash before the quick mind, as so many rough tests which eliminate grossly unfit matter or structure.

Whence radical uncertainty, and doubt? Whence Keats’s “uncertainties, Mysteries, doubts without any irritable reaching after fact & reason”? I am propel’d precisely by the “wafty and imbecile,” and the vexatious shuddery reflux. Clarity shills commonplaces. 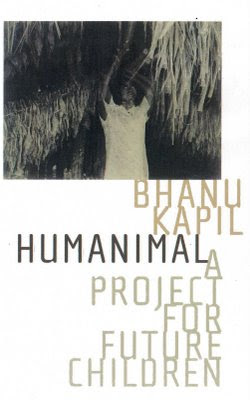 Out of Bhanu Kapil’s Humanimal: A Project for Future Children (Kelsey Street Press, 2009):

15. Coming over a ridge, Joseph saw two pale animals, their heads hanging down and thick with brown dreadlocks. There were drinking from a river with a pack of wolves. A twig snapped underfoot as Joseph strained to look but at that moment, the animals fled, in one sharp curve, back into the green. At night, the animals came once again to drink. In his hide, Joseph shivered. He could not see them clearly but he knew they were there. In the moonlight, the wolves and their companions were whitish, with eyes that shone when they turned toward him, mildly, reflexively. Blue.

G. Wet, wet, green, green. I mix with them and prosper. Sticky then my mother licks me clean. The nest is brown. Best is brown next to yellow. Best is blue then brown. Best yellow. Where will the sun go when it is finished? I ask my mother. I put my lips against her skin and drink. Her milk is white and then the sun goes in the ground. Because my mother does, she does so every night. We watch her disappear and then we disappear. Blue as blue then brown then green then black.

16.i. In the bedroom, he tried to feed her with a copper spoon, a mineralized utensil to replenish her blood. He made her eat, watching the pink food—a kind of semolina pudding mixed with jam—pool in her mouth. Her mouth was an O and with his fingers he tried to press her gums and teeth together. “Eat.” In the time I am writing of, villagers from the settlement of Midnapure came regularly to the orphanage, lining up at the gate to catch a glimpse of the two jungle children. For a few minutes a day, Joseph’s wife, the Home’s Mother, let them in and they swarmed to the room where the youngest girl was failing. They watched her fade and jerk in her cot, the spittle coming down over her chin. From these stories, I constructed an image of the dying girl as larval; perennially white, damp and fluttering in the darkness of the room.

16.ii. “She was buried in the churchyard of St. John’s Church, Midnapure, on the twenty-first of September, 1921. Her death certificate ran as follows: This is to certify that Amala (wolf-child), a girl of the Rev. Singh’s Orphanage, died of nephritis on September 21, 1921. She was under my treatment. September 21, 1921. sd / -s.p. Sabadhicari. Indian Medical Service.” —Joseph Singh.

A difficult book to “see” by quoting. Read in a couple of long draughts. Bhanu Kapil went (in 2004) with some French filmmakers to Midnapure; they—making “a documentary on human-wolf contacts”—want to film her doing research for Humanimal. That’s one story. Kapil’s work begins with “the true story of Kamala and Amala, two girls found living with wolves in Bengal, India, in 1920.” She writes:

My source text, the diary of an Indian missionary, Reverend Joseph Singh, was first published in 1945 as a companion text to Wolf-Children and Feral Man, a book of essays by the Denver anthropologist Robert Zingg. In the jungle, on a Mission to convert the tribal population, Singh had heard stories of “two white ghosts” roaming with a mother wolf and her pack of cubs. He decided to track them. Upon discovering the “terrible creatures” to be human, he killed the wolves and brought the children back to his church-run orphanage, the Home, in Midnapure. For the next decade, he documented his attempts to teach the girls language, upright movement, and a moral life. Despite his efforts, Amala died with a year of capture, of nephritis. Kamala lived to be about sixteen, when she died of TB.

Singh’s story is another, some of it quoted directly. Another is some quasi-identificatory imaginary, rarely narrative in impulse, language-floods in letter’d sections. (In a wonderful “poetics” Kapil says: “In a companion text, intrusion functions as an organizing principle. As an adult, for example, I take pleasure in the well-ordered house with the furry dog on the floor and the leg unaffectedly balanced on the mantelpiece. It’s a human leg. It’s art.”) Another is Kapil’s father’s story, a story of another “corrupt, humanimal landscape”:

29.ii. The legs: as a child, my father ate butter straight from the cow. Once, when his mother caught him red-handed at the churn, she beat him to blood with a bamboo cane. My father, a tiny, wiry boy, was smoking by age seven. Switching the cows home through fields of rape, his chest level with the sharp yellow blossoms. Barefoot, his feet resembled those of a goat’s: hard, rough, and smooth . . .

31.ii. My father’s legs were covered with silver pockets where the flesh had been scooped out then varnished to a high sheen. My father herded goats, supporting his family, for a time in its entirety. His own father had died of an opium overdose; I don’t think then exactly, but later. My father’s mother built a shelter out of tin and wood and straw and mud for the children. The second oldest child, my father, sold goat’s milk and tended the animals in the world of fields that extended in all directions for hundreds of miles. A twelve-year-old, illiterate boy, my father was standing in a field when he had a vision. He said: “I suddenly knew that when I grew up I would be a teacher in England. I said, ‘I will go to England and teach English to the English.’” And he did. He dragged himself out of the field and into the sky.

Or a story, later, Kapil a child, seeing her father emerge “out of his headmaster’s office with a cane” to beat a boy who claim’d he’d done “Nuffink.”

There’s something condemnatory and helpless here. The way the stories impinge and begin to echo back and forth—echoing, too, every story in a long history of humanimals, Gilgamesh’s friend Enkidu, Romulus and Remus, &c. One cherishes one’s animality (“Each feral moment is valuable”), one indicts one’s lack of humanity. In some sense Kapil’s father’s story comes to displace that of Kamala and Amala. It comes to witness larger injustices, larger societal traumas:

My father died young, in his fifties, though the doctor told me privately that his body was clearly ravaged by the debilitating effects of poverty, early malnutrition and the multiple muscular-skeletal traumas that he appeared to have sustained as a child. “On the contrary, Miss Kapil,” he said in a theatrical whisper next to the bed, “it is a miracle he lived this long. He should really have died as a child.” “You should go home, ducks,” said the nurse, and I did, passive to the ward’s routines. 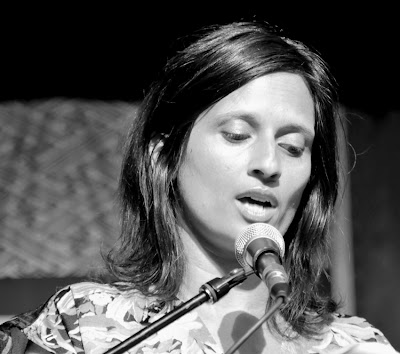