CCXCIX
S—,
Onerous the grind of
the infallible, how any
slight repute’ll make canny
a style, or ossify
a categorical bump, limiting
a man’s work, its
opposably-thumb’d pluck, its
likelihood of stenches nay-
saying and committed, its
rush of contrary erring.
“That’s not like Frank.”
In 1942 Grant Wood
dying in Iowa of
a cancerous liver insist’d
he’d live. Told Thomas
Hart Benton he intend’d
subsequently to rid himself
of the curse of
history, go off somewhere
“naked, new, total,” re-
commence unaccoutre’d, unaccount’d for.
An august American wrecking-
ball approach, no jimmying
up the hung sash
without busting the whole
stuck window out: smash
relief against the sallying
cumbrous binds of rue’d
social spew and conjuncture,
an unfitting rude fit.
J—

Onerous the cock-eyed grail of travel, “man alone of creatures upon earth transforms dull glory into lively glory.” The leaf-color, peak’d, dash’d off the trees by an unrelenting Friday rain, mostly yellows—incandescent yellows, buttery yellows, stain yellows—though with lilt tones of lavender here and there, something about the hard suddenness of the October frosts bit the maple reds off mid-stride, so, yellows. Reading: mostly continuing half-listlessly with Richard Holmes’s The Age of Wonder: How the Romantic Generation Discovered the Beauty and Terror of Science, a “shallower” book than, say, Holmes’s terrific two-volume Coleridge biography. That, and Jon Thompson’s discourse-dodging After Paradise: Essays on the Fate of American Writing (Shearsman, 2009). Thompson’s capable of turning out (arranging) some marvelous conjunctions. In a chapter call’d “The Treason of an Accent: Emily Dickinson’s Letters” (epigraph’d by Benjamin: “A chronicler who recietes eventd without distinguishing between major and minor ones acts in accordance with the following truth: nothing that has ever happened should be regarded as lost for history”), Thompson, reading the wildness of Dickinson’s third Master letter (“to recipient unknown,” that is to say futurity itself, “open your life wide, and take me in forever”) aligns Eliot, machismo, and Williams, a partial imperfect sum of responses:

The fevered isolation of this letter echoes through subsequent generations of American writing. Recall Eliot: “‘Speak to me. Why do you never speak? Speak. / ‘What are you thinking of? What thinking? What? / ‘I never know what you are thinking. Think.” (“The Waste Land”). The American genius for isolation matures a strange, rare—and desperate—variety of desire. Desire that cleaves the self, transfigures the word and seeks, in its desperation, to transfigure the world. The elegy of the invocation to the other, the other who is silent, who does not speak, cannot speak, but whose presence is nonetheless acutely felt: the terrible distance, is equal only to the terrible proximity, the imagined proximity, of the object of desire. The Master letters are also an elegy to the self, marooned between the flesh-self and the word-self, each isolate, each desiring a consummation beyond the self . . .

Dickinson’s American machismo. The lover to her beloved, with the machismo of the Indian fighter: “but I dont care for that—I’ve got a Tomahawk in my side but that dont hurt me much.”: the American bravado of it! Violence as love, love as violence—the wound as the emblem of faithfulness, the token of fidelity. The violent penetration of the body as the sign of love: only a frontier culture, persuaded of its righteousness, accustomed to conquest, and the strange intimacies of blood-letting, could so confuse love and violence.

William Carlos Williams: “Never mind; the great event may not exist, so there is no need to speak further of it. Kill! Kill! The English, the Irish, the French, the Germans, the Italians, and the rest: friends or enemies, it makes no difference, kill them all. The bridge is to be blown up when all Russia is upon it. And why?
Because we love them—all.” (Spring and All)

Where Thompson ends up: in Vietnam with Michael Herr’s brilliant Dispatches (“the most curious of love letters”). Manifest Destiny, that founding idea, run out of itself, gone bonkers (still going bonkers). Thompson, corralling into the mosaic the reluctant imperialist Conrad, and Nietzsche:

Conrad: “The conquest of the earth, which mostly means the taking of it away from those who have a different complexion or slightly flatter noses than ourselves, is not a pretty thing when you look into it too much. What redeems it is the idea only. An idea at the back of it; not a sentimental pretence but an idea; an unselfish belief in the idea—something you can set up, and bow down before, and offer a sacrifice to . . .” Herr has few illusions; the idea, for him, is ruinous, not redemptive. In the context of conquest, irony can no longer afford the luxury of outright self-contradiction.

No empire thinks of itself as an empire; it is always something else, something benign, ultimately, an expression of love. Nietzsche: “One has watched life badly if one has not also seen the hand that considerately—kills.” (Beyond Good and Evil)

Dispatches: A lover’s discourse, full of ambivalence toward his beloved.

The tragic achievement of a frontier nation is that it must continually invent new frontiers. Woe betide that which inhabits the space of the new frontier.

Irony’s “luxury of outright self-contradiction.” Prevalence of irony the mode of “self-expression” in the arts of the current (colossal) imperium. Thompson’s quoting of D. H. Lawrence (out of Studies in Classic American Literature): “But you have there the myth of the essential white America. All the other stuff, the love, the democracy, the floundering into lust, is a sort of by-play. The essential American soul is hard, isolate, stoic, and a killer.” 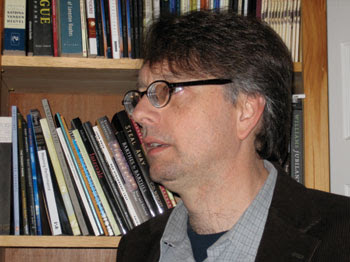