CCXCV
O—,
Affinity and repulse, branching
nervy root mimick’d up
high by twiggy wind-
roil’d top, magnanimously unmatch’d
by a trunk’s columnar
adhesion and sundering is
how we go. How,
indubitably, I am drench’d
within and without, a
suddenly saturnine op, wholly
uncontinental, dagnabbit. How I
find myself pinch’d unequip’d
between two aboriginal pun-
makers, shunning straight antagonisticks
with puerile glee. Today
I see somebody’s yelping
about how meagrely sex
is tiger’d out (unleash’d)
in American poetry. I
go cahoots with Emerson’s
aviso: every fucking vessel’s
a romantic object, except
when in we sail
combustibly big, with boarding
planks out. The body’s
a wash. Dross launch
and choir ephemeral for
what unferry’d illimitable music
streams unceasing out, up.
J—

A scavenger’s morning, gull at the dump. End’d up reading a chapter out of Free Verse editor Jon Thompson’s After Paradise: Essays on the Fate of American Writing (Shearsman, 2009)—“Ghost Writing: Whitman’s Specimen Days”—result of browse-noting a quoted line by Edmond Jabès: “O day everlasting within ephemeral day.” Which seem’d pertinent to how quotidian attendings—technology of the “signifying monstrance” of the hand pinching its eternal implement and screeving mightily away—how that beckons forth the everlasting within the daily. (Thompson’s Jabès-provided epigraph lends credence: “Everything is again set in motion—called into question—by writing.”) Truth is, I’d been reading through some of Roger Snell’s The Morning (Plein Air Editions / Bootstrap Press, 2009) and trying to think about dailiness and writing, and in the aftermath of booting my paean to “O—” out the door, finish’d with that assignment. Snell’s book is full of fiercely notes daily particulars—“Day’s ordinary activities,” he says—with all the solace of constellatory notational arrays. See it in a swatch out of a several-page piece call’d “The House: A Domestic Novel”:

. . .
Last night’s rain.
Green hills.
A toy boat.
Woods around pond.
To wander again.
A bell at dinner.
Sun, clouds, stars.
Tide pools.
Far-off edge of sea.
Oppen’s wooden corners.
Day’s ordinary activities.
A vibration in the ear.
The human eye.
An outward negotiation
of fact not psychology.
See it on the page.
Thinking, thinking.
Nothing is known.
“Perfectibility in rough strokes.”
Echoes. Yesterday’s airmail.
Jupiter.
The Greek pun about how
the moon’s light
is not its own. (See notes.)
Roast eggplant, shallot, garlic, onions.
Blue ball cap on doorknob.
. . .

And Thompson, talking of Specimen Days (“a notebook for a republic to come”), what Whitman himself call’d “little note-books for impromptu jottings in pencil” and “these soil’d and creas’d livraisons, each composed of a sheet or two of paper, folded small to carry in the pocket, and fasten’d with a pin”—Thompson noting that “For Whitman, writing is not a form of violence, but a form of tenderness, indeed, ministry.” (Snell’s enumerative “House” is full of such tendernesses, the searing love witness’d in particulars: “Roast eggplant, shallot, garlic, onions. / Blue ball cap on doorknob.”)

Snell’s “To wander again” and “‘Perfectibility in rough strokes’”—isn’t that, too, part of a long’d-for Whitmanic commonwealth, that “vision of national accord, in which the parts are give expressive freedom, whilst still resonating with one another . . . Separate, semi-autonomous, . . . interconnected” (Thompson)? Waywardness and cohesion, the daily reverie, domestic and national. Thompson, writing in our own “era” of embeddedness and credential, of canned obligatory response, Adorno’s “administered world” replacing one of ministry, writes of Whitman’s wandering:

Wandering and home: in nineteenth-century America, wandering was possible in a way that assassination, terrorism and mistrust have since made impossible: the relation between the individual and the government—his representative—was more physically intimate. Whitman wanders between the border of battle and make-shift hospitals with an ease and freedom unheard of in the sealed-off, restricted, zoned spacial world of early twenty-first century America . . . With television many more see, but fewer witness. Where once witnessing was a way of life, now witness has been professionalized to a few specialized priesthoods. What happens to souls uneducated by witness? Do they become adamantine? Or simply boorish?

Snell: “Whatever space there was / one went far to see it—Lookout point, Fisherman’s Island / Slippery Rocks—until looking back meant / any imagined self was beyond home” (in “The Morning”) and (in “Place”), the perfectly enigmatic play of forces (“Affinity and repulse”)—“Far from home: / the wet leaf clinging / to the door.” Thompson’s own systole / diastole, the cringe and cut loose, jagged piece and round’d whole:

For Whitman, war is beyond full representation: only snatched, broken fragments, put together in a lyrical helter-skelter idiom, can begin to address its unspeakable violation—and its unspeakable beauty. Only fragments of the horror can be offered up; anything else is impossible. Again Jabès: “Only in fragments can we read the immeasurable totality.”

Who writes, who ever can write the story? The story is that which always escapes the telling. The burden of the writer is to accept this limitation—and continue to write. What is written always carries with it traces of that which did not get written, the story untold. Hence the necessity of writing . . . 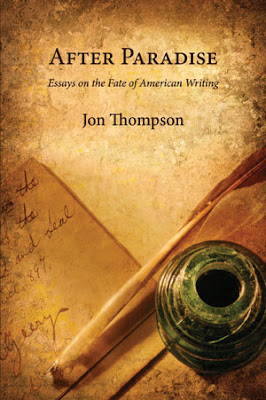 Jon Thompson’s After Paradise: Essays on the Fate of American Writing 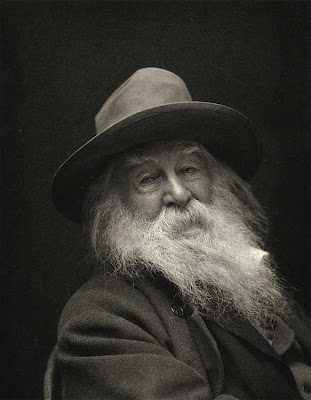 Out of Roger Snell’s The Morning (Plein Air Editions / Bootstrap Press, 2009), a piece without title, sans commentaire. It is placed at the beginning of the book’s fourth section, immediately succeeding two epigraphs—Paul Celan’s “This ‘still-here’ of the poem can only be found in the work of poets who do not forget that they speak from an angle of reflection which is their own existence, their own physical nature” and Bernadette Mayer’s “I sit at the family table where it’s a struggle / To create both staminate and pistillate in the same / Inflorescence of cluster”:

lost car comes
in on the morning
light, off reflecting pool
of Creeley
quiet as is proper for such places
this space between
each bale of words
a fistful of green shoots
tansy on hill
fissures of blue

we inhabit fours rooms
a series of forts made
from discarded fabric
measure light
descending
thru Eucalyptus
dappled sunlight
on wooden floor
there’s a lot of lacto-fermentation
going on in this house
this city squeezes it out
like a Fanny Howe poem
green leaves are like pages, waterized

Ann’s portrait
by dried flowers—
apparent as light
enters room
the edges
where lines
blur, press
upon letters
outward into blue sky
this would be a novel
if the names were invented 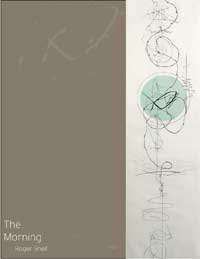