CCLXXXII
B—,
Defiance never kick’d against
pricks with such hearty
ferocity, the “I” says
it all. Call me
marker, privateer, recidivist, thief—
I got my booty
bundled up and stash’d
in the commons and
if the gods refuse
my jubilant soul, its
beholding soliloquy, I pour
out my quotidian snips
to you! You who
refuse the town like
me, and so ardently
write whim and duffle
against the lintels of
Nature’s unhung doors, pronging
the white bark of
birches, going quickly along
the chirruping hedges to
keep the “T wang
dillo dee” hid, oh
it’s you I love!
That “I” is splay-
foot’d, elastic, impertinent, charg’d
with a fine penmanship
little visible through smears
of cyber-light and
black currant jelly drop’d.
Heart’s-ease, I, too,
drop everything for you.
J—

Skunk’d. The dog returns up out of the back with a fierce stench and a muddy snout, presumably gain’d by a harassing a skunk, getting a dash in the eye and shoveling her nose upside-down all up and down the yard in the rain. Which call’d for a two shampoo and one bucket of vinegar and baking soda shower and still the whole house reeks. Which precluded nigh anything beyond finally flopping down with Richard Holmes’s The Age of Wonder: How the Romantic Generation Discovered the Beauty and Terror of Science and peeking into the Bath doings of William and Caroline Herschel. One parsec equals 3.26 light-years. Viddy that. 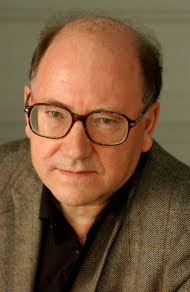 Some various pieces (again) out of the Sam Lohmann-edit’d Peaches & Bats. Out of the third issue (2009), a couple of parts of Stephen Collis’s sequence call’d 4 X 4, riffing, amongst much else, the interstices between “appropriation” and “capital”:

Some freighter stopped by urban docks
To watch containers fill with products
Was I born in a half-savage country       out of date?
Allow me my accelerated grimace       my obstinate isles

And, too, in #3, Elaine Equi’s delightful “Collectible Tears”:

Musical tears worn only to the opera or symphony.

Hundred proof tears of high alcoholic content often passed from one generation to the next.

Lachrima Christi: the tears of Christ. Not only did he turn water into wine, he cried champagne!

Masculine tears thought to be more rare, and as is often the case, of higher value than feminine tears.

Wedding and funeral tears, too common to be of much interest.

Out of the second issue (2008), a marvelous thing by Colin Beattie—who “makes sandwiches at a grocery store while thinking about “expandable tubular technology,” the sudden melting of brine,” and “the uncertain fate of enclave territories”:

A selection entitled “The Garden Wall,” or “Regarding a Tendency within Complex Systems for the Spontaneous Correction of Disparities in Position and Accumulation by Process of Arbitrary Redistribution”

Tiny birds have modeled their refrain
On the cries that echo from the palace.

Signal out of noise. Too, in Peaches & Bats #2, out of an interview with Robert Kelly, a lovely riff about religion that occurs only because Kelly apparently mistook the word “religion” for “revision.” Beginning with an anecdote about William Gaddis and religion:

In The Recognitions religion plays a huge role; the hero is a kind of—priest, or something like a priest, and those issues are very important: authenticity, apostolic succession, religion, one’s contact with God. Years later he was asked by someone a question in the form of, “In The Recognitions religion plays a huge role, but in your later novels, JR, Carpenter’s Gothic, there’s no reference to it at all, what happened?” He said, “It went away.” I suppose I’ve been waiting all my life for it to go away for me, but it never has gone away, it’s always remained there, it’s always been a part of the invisible other that walks at our side. And if you don’t have an invisible other walking at your side—and you do, you know you do—unless you have that you can never really make sense of any writing or any art, if you just think you’re all alone there. If nothing else you know you have language; language is the usual invisible other for all of us. To tell a story I’ve told perhaps too often: I once invited Ed Dorn to give a poetry reading at Cal Tech where I was teaching briefly—I was poet-in-residence at Cal Tech, strange to say—, and at the end of the reading which was as usual very short and vivid and wry and ironic and clever and forceful, some kid in the audience said, “Mr. Dorn, what do you believe in?” And there was a very very long pause, and then Ed said: “Language”—and that was enough of an answer. And it silenced the audience that was expecting to hear “Ghosts,” or “God,” or whatever in California they thought about in those days as the object of the verb believe—and the word believe can have many objects. But what I like was that Ed absorbed the word believe and didn’t quarrel with it, and translated it into a more human kind of verb, unspecified, which could properly have the object, language. Because: one of the problems with our world, and maybe with our sense of religion, is this word belief that has crept into religious practice. If you asked an ancient Greek, or an ancient Roman, or for that matter an ancient Hindu, “What do you believe?,” they would have asked you, “What do you mean believe?” And if you explained for a while the difference between knowing and believing, in our curious sense, they would have said, “Well, I don’t believe anything. I know certain things; I know that Ceres makes the corn grow in the summer, I know that Jupiter thunders in heaven; I don’t have to believe that, I hear the thunder, I taste the corn.” And we would be baffled and say “Oh, you don’t understand; we’re not talking about things that you can see and touch.” And they would say, “Why are you talking about such things? What’s the matter with things we can see and touch?” And we would shake our heads and say, “Pagans!”
But in fact this question of belief haunts contemporary religion so desperately—“What do you believe?,” how does a Catholic differ from a Protestant—obviously, it’s a financial, social difference in Northern Ireland, it has nothing to do with belief, and yet by introducing the notion of belief the thing becomes deeply complicated. Anyway: in Ed’s saying “Language” he was pointing to what I call “the invisible other” that is always present with us. And there are any invisible others, I think, not just language.

One of Laynie Browne’s “Scorpyn Odes” out of Peaches & Bats #4:

Another name for Aconite